As Turkey continues its struggle with the Syrian Kurdish militants allied with the United States against the Islamic State in Syria, Ankara has issued a warrant for the arrest of Salih Muslim, the co-chair of the group's political arm. 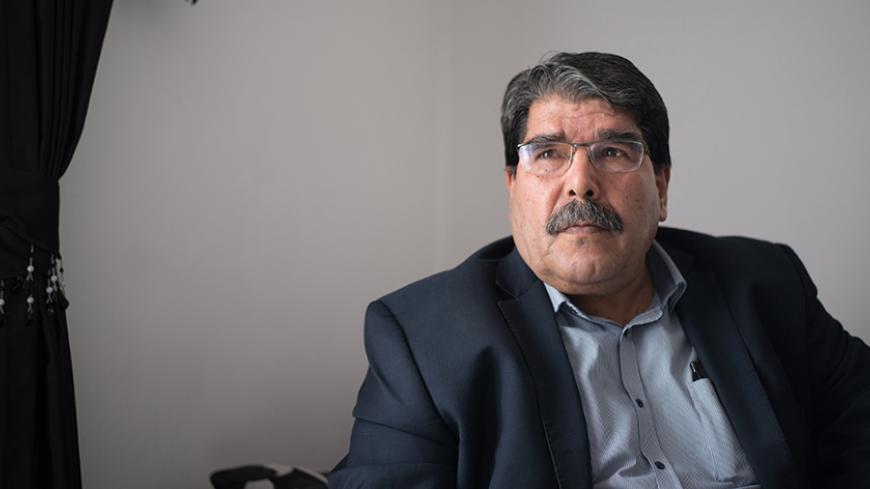 A Turkish court issued a warrant for the arrest of Salih Muslim, the co-chair of the Syrian Kurdish Democratic Union Party (PYD). The Nov. 22 move signals a further hardening of Turkey’s position on the United States’ top ally against the Islamic State in Syria. The court also issued warrants for 47 other people, including senior commanders of the Kurdistan Workers Party (PKK), over their alleged involvement in a car bomb that hit a military convoy in Ankara earlier this year that left 37 people, both military personnel and civilians, dead.

It remained unclear why Muslim, the Syrian Kurds’ de facto foreign minister, was included in the list. For a while, Ankara flirted with the urbane PYD leader in hopes of persuading him to join Turkey’s ill-fated proxy war against Syrian President Bashar al-Assad. And even as Turkey egged on assorted Syrian rebels against the People's Protection Units (YPG) in places like Ras al-Ain, it offered free medical care to hundreds of YPG fighters wounded in battles against IS.

Despite such contradictory signals, Muslim was in Turkey in February last year when YPG forces helped Turkish troops relocate the tomb of Suleiman Shah, which was besieged by IS militants, to the village of Esme near the Turkish border.

The “Esme spirit” became the new rallying cry for the latest round of peace talks between Turkey and imprisoned PKK leader Abdullah Ocalan. The dialogue broke down last year, partly because of differences over Syria and the PYD.

The PYD is the political arm of the YPG, the Syrian Kurdish force that is at the forefront of the US-led coalition’s ongoing battle to take the jihadis’ self-proclaimed capital Raqqa. Turkey now labels the PYD and the YPG “terrorists” because of their close ties to the PKK and has been lobbying Washington to cut off its support to the Syrian Kurds.

Thus, the Turkish authorities' pinning blame for the Ankara attack on the YPG was calculated to embarrass the United States into shelving its alliance with the group. Never mind that the Kurdistan Freedom Falcons, the PKK’s urban terror wing, claimed responsibility for the bombing.

But despite Turkey’s protracted and ever shriller complaints, the United States continues to arm and train the YPG and its Arab affiliates, who operate under the umbrella of the Syrian Democratic Forces. The pro-government Yeni Safak claimed on its front page Nov. 22 that the United States had set up a “training camp” for the YPG and the PKK in the town of Tell Abyad across the Turkish border.

The newspaper described the YPG’s control over the town, which it wrested from IS last year with US backing, as an “occupation.” It asserted that US “experts” had so far trained some 1,400 “terrorists” ostensibly to take part in operations to retake Raqqa, but that many had been diverted to the Manbij front instead.

It would hardly be surprising if the US special forces were training some Arabs in Tell Abyad, as it lies directly north of Raqqa and is mainly Arab. It has long been accepted that more Arabs, not just Kurds, need to oust IS from Raqqa. That Yeni Safak presented this as hostile activity rather than a welcome defense against IS, which presents a far bigger threat to Turks than to Americans, reflects the official thinking in Ankara: The YPG is a greater menace than IS.

Since August, Turkey has ramped up efforts to contain the Syrian Kurds, both on the ground and from the air. On Nov. 22, Turkish President Recep Tayyip Erdogan declared that Turkish-backed Syrian opposition forces, which are holding YPG/SDF forces in check around the strategic town of al-Bab, would head toward Manbij as well.

Brett McGurk, the special US envoy for the anti-IS coalition, caused a stir when he tweeted on Nov. 16, “Milestone: all YPG units to depart Manbij and return east of Euphrates after local units complete training to maintain security after [IS]."

With these words, McGurk, who has become a bete noir in Ankara over his perceived affection for the Syrian Kurds, in Turkey’s eyes, “confessed” that the YPG was still in Manbij. Washington had promised Ankara that the YPG would withdraw immediately from Manjib when it was seized from IS back in August. Ankara’s ire was further stoked when American Col. John Dorrian, a spokesman for the anti-IS coalition, confirmed last week that Turkish-backed rebel moves on al-Bab were not being backed by coalition airstrikes.

Over the past weeks, Turkey has taken matters into its own hands, resuming airstrikes against IS and YPG targets near al-Bab, ostensibly with Russia’s blessing.

Washington’s frantic efforts to deconflict its Turkish and Kurdish allies are simply not working, and the YPG is threatening to pull out of the Raqqa campaign if Turkey does not halt its attacks. Erdogan might be betting that US President-elect Donald Trump will be more sympathetic to Turkey’s concerns about the YPG.

But the counterargument, that through its actions Turkey is undermining the fight against IS, may well prevail.