In tomorrow's meeting, Turkish President Recep Tayyip Erdogan will seek to persuade US President Donald Trump to reverse the decision to arm Syrian Kurdish militia, but Trump is unlikely to reverse course on the closest he has to a sure thing: victory in Raqqa. 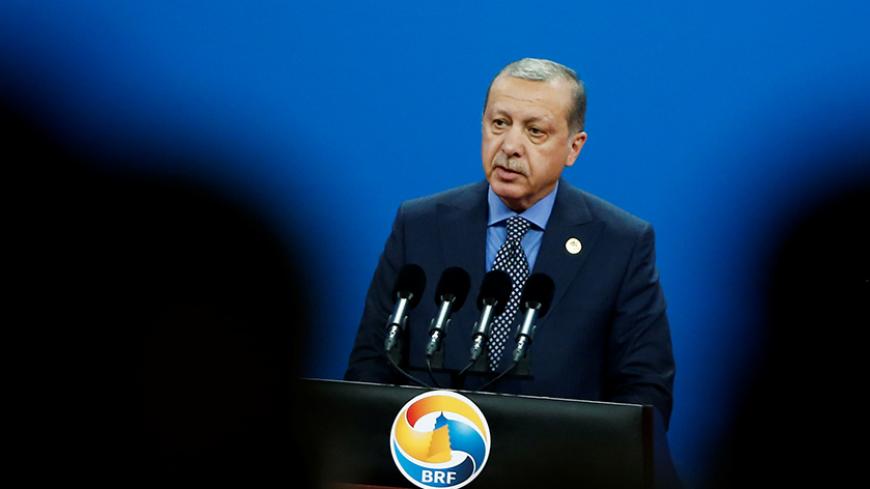 Turkish President Recep Tayyip Erdogan speaks during the opening ceremony of the Belt and Road Forum in Beijing, China, May 14, 2017. - REUTERS/Thomas Peter

Turkey’s President Recep Tayyip Erdogan arrives in Washington today to hold what promises to be a bumpy meeting with his American counterpart Donald Trump. The pair are expected to meet at the White House May 16 and much of the discussion will likely focus on a controversial US decision to arm a Syrian Kurdish militia known as the People's Protection Units (YPG), which Turkey considers a terrorist group.

Erdogan says he will seek to persuade Trump to reverse the decision announced last week to provide heavy weapons to the YPG in preparation for an all-out assault on Raqqa, the Islamic State's so-called capital.

The move has plunged US-Turkish relations to a new low, unleashing a tidal wave of anti-American sentiment. The pro-government newspaper Yeni Safak announced that 96.4% of respondents to an informal poll said they viewed the United States as Turkey’s “enemy” and 94.5% said that the United States ought to be denied permission to use the Incirlik Air Base in the coalition’s anti-IS air campaign.

In an unsubtle attempt to give Trump a way out, Erdogan claimed that the decision to arm the YPG was made “under the influence of US officials” who served under the Obama administration. He was probably referring, among others, to Brett McGurk, the presidential envoy to the anti-IS coalition who was kept on by Trump and deeply resented by Turkish officials over his perceived affinity for the Syrian Kurds.

Erdogan, who apparently hopes that he can win Trump over, proclaimed, “I see this trip as a new milestone in Turkey-US relations.” But it's unlikely that Trump will reverse course. Beset by domestic woes that have been further aggravated by his controversial decision to fire FBI Director James Comey, Trump is desperate for success and the YPG’s proven battlefield prowess points to an assured victory in Raqqa.

Turkey’s main objection to the alliance is that the YPG was spawned by another Kurdish militia, the Kurdistan Workers Party (PKK). The group has been waging a bloody war for Kurdish self-rule inside Turkey since 1984 and is listed by the US State Department as a foreign terrorist organization. The YPG is not, however, and the United States used this legal loophole to embark on the now flourishing partnership.

It is an open secret that many of the YPG’s top commanders and political cadres are drawn from the PKK, and many administration officials privately acknowledge that the two groups are connected. To allay Turkish concerns, the Pentagon has promised tight monitoring of all the weapons given to the YPG and assurance they will not be directed at Turkey.

But can it? Not really, argues Nicholas A. Heras, a senior fellow at the Center for a New American Security. Heras told Al-Monitor that in theory, the United States could rescind arms deliveries to the YPG if it were established that they were winding up in PKK hands and used against Turkish security forces inside Turkey. “But in practice, once the weapons are distributed, tracking them becomes very difficult,” he said. These arms include rifles and explosive munitions. The big question is whether the YPG will also be issued the same anti-tank guided missiles that IS used to deadly effect against Turkish-backed Euphrates Shield forces and their tanks during their campaign to capture the IS-held town of al-Bab earlier this year.

Heras argued that by directly arming the YPG, the US military has effectively become the go-to address for Turkey if the Syrian Kurds violate their pledge not to deploy them against Turkey.

“A continued US presence in northeastern Syria until central authority reclaims power is the best guarantee that the YPG won’t turn against Turkey,” he said. By the same token, US forces can fend off further Turkish attacks against the Syrian Kurds.

None of this is likely to cut much ice with Erdogan, who says Turkey and coalition allies Saudi Arabia and Qatar can help the United States fight IS better than the Syrian Kurds.

In fact, Turkey was given well over a year to assemble an alternative force of Sunni Arabs to do the job. It failed. In any case, the rebels were always more motivated to fight the regime of President Bashar al-Assad.

Turkey’s Islam-rooted government was never very enthusiastic about taking on IS, either. It took over a year and a half of tortuous negotiations for Turkey to open the Incirlik Air Base for coalition air missions against IS. In the meantime, determined to see the Syrian regime overthrown, Turkey allowed rebels of all stripes, including al-Qaeda-linked jihadis and IS fighters, to move freely across its borders.

Turkey also saw the rebels as handy proxies against the Syrian Kurds. When IS fighters laid siege to the Syrian Kurdish town of Kobani in the fall of 2014, Turkey looked the other way. That was when the Americans rushed to the Kurds’ defense and their alliance was born. It’s unlikely to end anytime soon.

Once Raqqa is liberated, the coalition will focus on uprooting IS from Deir ez-Zor, where many IS leaders are believed to have fled. Despite recent advances by regime forces from Palmyra toward Deir ez-Zor, said Heras, “They do not have the capacity to seize the area within a timeline that fits US counterterrorism goals.”