Turkey wary of NATO's decision to join fight against IS

Turkey didn't veto NATO’s decision to join the anti-Islamic State coalition in Syria and Iraq, but it does consider the move part of a plan to strengthen the Kurdish People’s Protection Units. 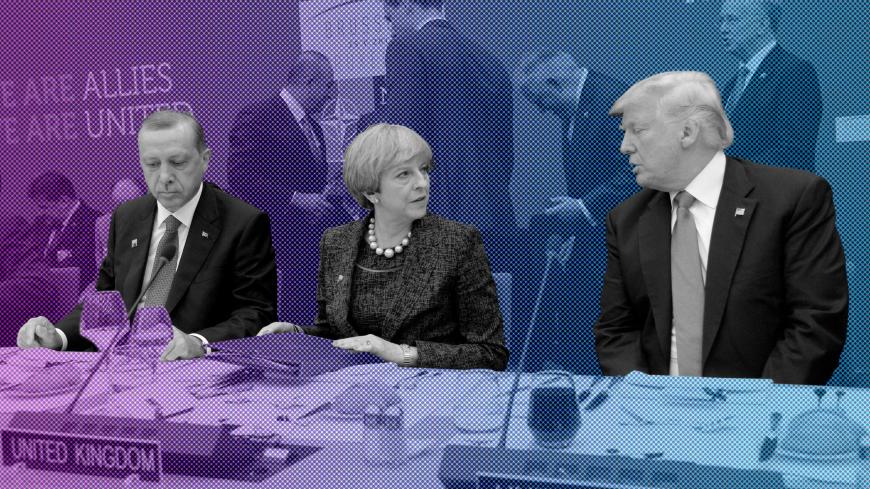 US President Donald Trump (R) speaks to Britain's Prime Minister Theresa May (C) as Turkish President Recep Tayyip Erdogan (L) sits nearby during a working dinner meeting at the NATO headquarters during a NATO summit of heads of state and government in Brussels, Belgium, May 25, 2017. - REUTERS/Thierry Charlier

NATO, which has had problems successfully conducting missions in the post-Cold War era, is now heading to Iraq and Syria after dismantling Yugoslavia and abandoning Libya, and without coping with the Taliban in Afghanistan. Nevertheless, at its May 25 summit in Brussels, NATO decided to join the 68-nation anti-Islamic State (IS) coalition led by the United States.

According to NATO Secretary-General Jens Stoltenberg, the alliance will step up its reconnaissance with AWACS (airborne warning and control system) planes, provide more intelligence support for anti-IS operations, coordinate air operations over Iraq and Syria, and set up a special unit in its Brussels headquarters for intelligence and planning against terror. But NATO will not play a combatant role.

The decision is, in a way, a move to appease US President Donald Trump, who had declared NATO obsolete and wants alliance members to pay their "fair shares." Trump must have been pleased to see Germany, France and Italy — none of which wanted NATO to get involved in Iraq and Syria — retract their objections.

Under normal conditions, Turkey should also be pleased. Turkey is NATO’s second-largest military force, and for a time Ankara persistently pushed to expedite the Syrian uprising against the regime of President Bashar al-Assad. More recently, the Turkish government began demanding that the United States terminate its alliance with Syrian Kurds and instead take on IS with Turkey and other NATO members.

But neither of those reasons appealed to alliance members. NATO’s decision to embark on a limited mission now doesn't meet Turkey’s conditions: It will not facilitate Assad's departure or end the US partnership with the Kurdish People’s Protection Units (YPG). Despite this hard fact of life, Turkey focused its attention at the NATO summit not on the alliance getting mired in Syria and Iraq, but on eradicating NATO’s program partnership with nonmember Austria. Turkey has been accusing Austria of blocking Turkey’s access to the European Union.

At the summit, Turkey repeated its warnings to the United States about assisting the YPG, this time to NATO. After the Brussels meeting, Turkish President Recep Tayyip Erdogan was asked if there will now be a relationship between NATO and the YPG and what NATO’s opinion is of the YPG. Erdogan replied: “This was raised in our earlier meeting with Stoltenberg. NATO doesn’t have a positive view of the YPG. ... We discussed the YPG issue with EU countries that are also NATO members. We explained about the YPG and our attitude. The US is about to launch an operation at Raqqa, together with the YPG. But we said once again that if a mistake is made against our country, we will apply the rules of engagement both in Iraq and Syria.”

These comments indicate Turkey has accepted that NATO’s participation won't disrupt the US-YPG partnership against Raqqa and Turkey will continue its harassment firing on YPG positions near the Turkish border.

Journalist Fikret Bila, who had accompanied Erdogan on his Brussels visit, recalled that Turkey has always favored NATO’s involvement in the struggle against IS and considers the alliance's decision to participate "much-belated."

“The US preferred to work with the YPG instead of Turkey or other NATO forces. It continues to arm the YPG despite Turkey’s objections. The [Kurdish] front wants to collect political benefits in return for doing the US’ fighting in Syria. Their goal is autonomy in north Syria and then an independent state for the PKK [Kurdistan Workers Party]. As the US is determined to cooperate with the YPG, NATO’s support for the operation will mean support for the YPG. It is therefore important for Turkey to understand the intricacies of NATO’s relationship with the YPG," Bila said.

"From the outset, Turkey has been asking the US to share its raw intelligence about all terror organizations. But the US refrains from it. The same problem may arise with NATO. This may create a crisis of confidence between Turkey and NATO. NATO’s support will provide the YPG with more legitimacy. Turkey put its views on the record in Brussels. NATO was thus served notice that if the NATO involvement is used as a threat to Turkey-controlled parts of Syria or to Turkish borders, Ankara will respond militarily.”

Currently, the United States sees no alternative to the YPG as a ground force. Apart from Turkey — which has proposed sending its special forces to Raqqa to coordinate opposition militants trained and equipped by Turkey — no NATO member will commit troops to the ground to fight IS. NATO members don’t want to get dragged into an impasse with a combat mission, as happened in Libya.

Despite all its national security reservations, with the decision made in Brussels Ankara will have to open not only Incirlik Air Base but all other bases to NATO operations. Ankara was trying to use Incirlik as an ace card to disrupt the US alliance with the Kurds. NATO's decision also coincided with the argument over Incirlik between Turkey and Germany. Ankara banned German parliamentarians from visiting German soldiers at the base and Germany reacted by hinting it might look for an alternative base. Ankara said, “As you wish.” But from this point on, an argument over the bases would mean that Turkey would be challenging NATO.

Erdogan’s decision not to veto the NATO decision, even as he keeps talking about the risks of dealing with the YPG, gives the impression that the debate is solely about the Kurds. Among Turkey’s Islamists and nationalists, the tendency is to interpret the NATO decision as part of a US plan for a future Kurdistan. These quarters in Turkey say:

When the debate is limited by Kurdish phobia, there is not much room for a meaningful analysis to seek answers to these questions: What is the connection between NATO's decision and the Donald Trump administration’s goal of limiting Iranian influence in Iraq and Syria? There is a scenario floating about that the idea is to prevent Iran from setting up an unbroken corridor from Iraq to Syria and then to Lebanon. There are plans for opposition forces inserted into Syria from Jordan to capture al-Tanf border crossing and for using the US-supported Syrian Democratic Forces advancing from Raqqa and Deir ez-Zor to capture the Abu Kemal/Qaim border crossing. According to this scenario, with these two moves the east of the country will be removed from the Syrian regime’s control and there will be a buffer zone between Iraq and Syria. Is bringing NATO in linked to this scenario?

Is NATO’s joining the anti-IS coalition linked to the mission foreseen for the Islamic Military Coalition (IMC)? This coalition the Saudis have been working on feverishly for two years was officially declared May 21 at the US-Arab-Islamic summit at Riyadh. The announcement said that, if necessary, 34,000 soldiers of the IMC can be based in Iraq and Syria.

Does all this mean that the announcement by NATO, whose members are already in the anti-IS coalition, is purely symbolic? Have NATO members breathed life into their alliance and made it useful all because of Trump's lecture?