US backs Turkish offensive with airstrikes around al-Bab

After repeated appeals from Turkey for the United States to help Turkish troops and their rebel proxies to capture al-Bab, US airstrikes are resuming in a move that could help diffuse growing tensions between the NATO allies. 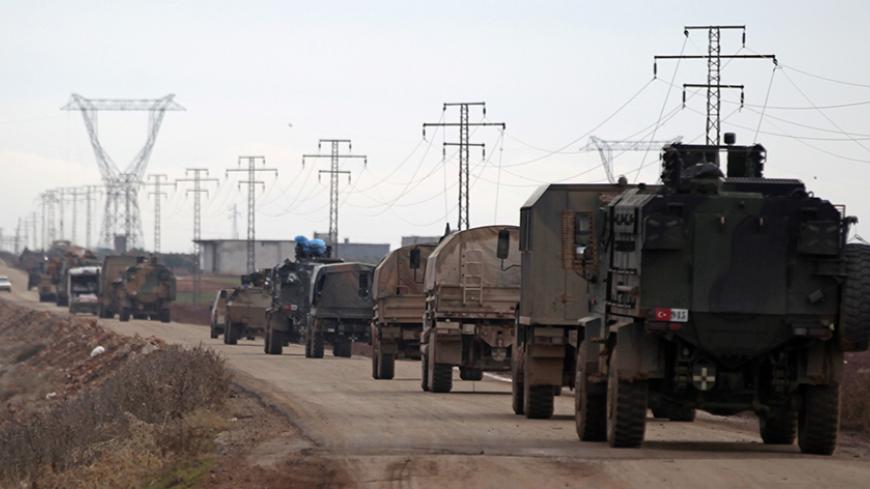 Turkish military vehicles drive through the Syrian rebel-held town of al-Rai as they head toward the northern Syrian town of al-Bab, Jan. 9, 2017. - REUTERS/Khalil Ashawi

The United States has resumed airstrikes in support of Turkey’s ongoing campaign against the Islamic State in Syria, a spokesman for the US-led coalition based in Baghdad told reporters Jan. 17. The move could help diffuse growing tensions between the NATO allies.

Air Force Col. John Dorrian said four airstrikes carried out on Tuesday near the IS-held town of al-Bab hit IS construction equipment and tactical vehicles, including an armored personnel carrier. US forces are likely to remain active in and around al-Bab in the coming days, Dorrian said. He called Tuesday’s operation “in our mutual interest.”

The move follows repeated appeals from Turkey for the United States to help Turkish troops and their rebel proxies to capture al-Bab. The operation, which is in its third month, has encountered fierce resistance from the jihadis, with dozens of Turkish soldiers and many more rebels killed in the fight.

Washington’s reluctance to carry out strikes prompted angry statements from Turkey’s leaders, who accused the United States of siding with “terrorists” and hinted that it could even block coalition access to the Incirlik Air Base, which is critical to the anti-IS effort.

The row over al-Bab reflects the extent of the mutual distrust gripping the two NATO allies, a conflict Russia has been zealously exploiting. The semi-official Anatolian news agency reported today that Russian and Turkish forces had carried out their first joint operation against IS in Syria, hitting 36 jihadi targets near al-Bab. The move follows a Jan. 12 agreement signed between Turkey and Russia allowing their respective air forces to coordinate operations in Syria.

Washington had earlier cited Turkey’s refusal to allow US drone reconnaissance missions as the reason for its foot-dragging over al-Bab even as a Pentagon spokesman confirmed that no such permission was required. Turkish officials claimed the real reason for America’s obduracy was that it did not want to hurt relations with its Syrian Kurdish allies who also covet al-Bab.

The more likely explanation is that Turkey wanted to call in US airstrikes without providing detailed operational information about its ground offensive for fear that the United States would share it with the Syrian Kurds.

The New York Times revealed in a Jan. 17 report that Turkey has begun delaying approval for American air missions that are flown from Incirlik. The Times speculated that such actions are intended to dissuade the outgoing Barack Obama administration from authorizing direct weapons transfers to the Syrian Kurdish fighters who are the coalition’s top allies in the fight against IS. The People's Protection Units (YPG) are branded terrorists by Turkey because of their links to another Kurdish group, the Kurdistan Workers Party, which is waging a bloody insurgency inside Turkey. Turkish officials told Al-Monitor that Turkey has offered its own combat forces for Raqqa, the jihadis’ “capital,” instead of the YPG.

It remains unclear whether the alleged delays in US air missions influenced Washington’s decision to give Turkey support in al-Bab.

But the Pentagon insists that the YPG and its Arab allies remain the coalition’s most effective partners on the ground and signs suggest that President-elect Donald Trump may very well ignore Turkey’s objections and sign off on arming them.

Sources close to the transition team speaking on the condition their names be withheld told Al-Monitor that Trump wants “a quick victory” against IS in the first 90 days of his administration and that this means he will likely stick with the Kurds. Trump is said to be even weighing putting American boots on the ground to help conquer Raqqa, reported CNN.

It remains unclear, though, whether the Trump team has given any thought to whether it will keep some 500 US special forces soldiers currently deployed in the Kurdish-controlled zone once IS is defeated.

The Syrian Kurds see the American presence as a guarantee against attack from Turkey and the Syrian regime and say they want to elevate their partnership with Washington to a political one. Top Syrian Kurdish official Ilham Ehmed is currently in Washington to push their case.

Turkish lobbyists and other self-appointed advocates for Turkey are in turn trying to convince key members of the Trump team to ditch the Kurds. One of them, Mehmet Ali Yalcindag, is Trump’s business partner in Turkey. Foreign Minister Mevlut Cavusoglu is in Washington for the inauguration and he just tweeted that he had breakfast with Trump's national security adviser Michael Flynn.

Coalition officials acknowledge that keeping the YPG and Turkish forces away from each other remains one of the biggest challenges in the fight against IS. Those efforts appear to be failing.

Turkish forces have escalated attacks against the YPG, albeit in areas where there is no US military presence. But Turkey’s President Recep Tayyip Erdogan has vowed to carry the fight to Manbij, an Arab-majority town that the YPG captured last fall with US air support. The biggest worry all around is that US forces will accidentally get hit.