In their first call since Donald Trump became president, Turkish President Recep Tayyip Erdogan pushed for an end to the US alliance with the Kurdish People's Protection Units. 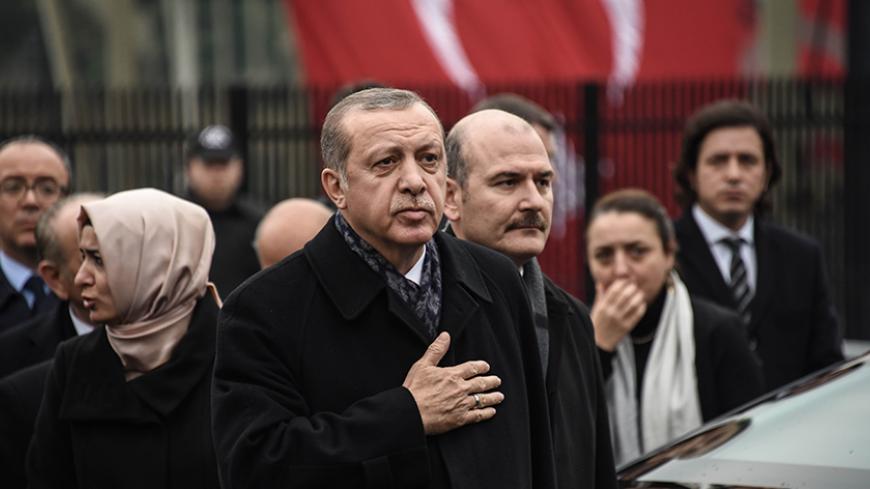 Turkish President Recep Tayyip Erdogan has repeated calls for the United States to ditch its alliance with a Syrian Kurdish-dominated militia in its battle against the Islamic State (IS).

In a late night phone call Feb. 7 with Donald Trump, Erdogan drew attention to the close ties between the Syrian Kurdish People’s Protection Units (YPG) and the Kurdistan Workers Party, the group that is fighting for Kurdish autonomy in Turkey and is on the State Department’s list of terrorist organizations.

There was no word, however, on Trump’s response to Erdogan’s complaints about the YPG. In a brief readout of the call, the White House stated, “President Donald J. Trump today spoke by phone with President Recep Tayyip Erdogan of Turkey about the close, long-standing relationship between the United States and Turkey and their shared commitment to combatting terrorism in all its forms. President Trump reiterated US support to Turkey as a strategic partner and NATO ally and welcomed Turkey’s contributions to the counter-[IS] campaign.”

Few believe the Pentagon will abandon the YPG and its Arab allies, who have proven to be the most effective fighting force against IS on the ground ahead of a planned offensive to seize Raqqa, the jihadis’ “capital.” Still, there is growing debate over whether a predominantly Kurdish force could hold Raqqa, a mainly Arab city.

For example, in testimony to the Senate Foreign Relations Committee on Feb. 7, James F. Jeffrey, a former US ambassador to Turkey and current senior fellow at the Washington Institute for Near East Policy, said that four major Arab tribes around Raqqa “are to one or another degree at odds with the Kurds, raising questions about the day after in Raqqa if the city was liberated by Kurds or Arab elements under their control.”

Jeffrey argued in favor of a “joint effort on two fronts” by Turkey and its Free Syrian Army proxies and the YPG, saying it would put “more military pressure on IS and potentially calm Turkey’s concerns about the YPG.” Jeffrey also suggested that Erdogan would be more “flexible” on the YPG once a planned referendum on boosting his executive powers is behind him. To win, Erdogan is relying on nationalists who fiercely oppose engagement with the Kurds.

In a related development, Turkish Foreign Minister Mevlut Cavusoglu told a news conference Feb. 8 that Turkish special forces should aid in the planned coalition offensive to liberate Raqqa, an offer that Turkey made to the Barack Obama administration and that was likely repeated by Erdogan in his 45-minute call with Trump, their first since Trump became president.

“As regional countries, as countries inside the coalition, we can put our special forces in, we need to put them in,” Cavusoglu said. His statement came as Turkish troops pushed their offensive against IS into the Sunni Arab town of al-Bab, capturing the strategic Aqil Hill and al-Bab's hospital. Turkish forces had seized the hill on Dec. 20 only to lose it to IS two days later.

Turkish presidential spokesman Ibrahim Kalin said Turkish troops and their rebel allies had entered al-Bab and that they were coordinating with the Russians to avoid potential clashes with the Syrian regime and Hezbollah forces advancing on the town from the south. At least two Turkish soldiers were killed, and 15 others were wounded, raising the total number of Turkish fatalities to 58 since the launch of Operation Euphrates Shield in August.

Although Turkish troops have succeeded in clearing Turkey’s borders of IS, the battle for al-Bab has proved a lot tougher both militarily and diplomatically, with Turkey and the United States at odds over the mission and its conduct. Washington says Turkey launched the campaign for al-Bab without consulting the US-led coalition, while Turkey complains that the United States has refused to lend its support. Yet each time Washington has offered to conduct drone surveillance missions or to send in special forces to help out in al-Bab, Turkey has reportedly refused, insisting that the coalition carry out airstrikes based on coordinates it provides and nothing more.

The impasse prevailed until late January, stemming in large part from concerns that the United States would share intelligence with the YPG, which also wants to capture al-Bab. The city is a key part of the YPG’s long-running plan to link territories it controls to the east of the Euphrates with those lying to its west.

Around 300 civilians, including 60 children and 35 women, have died in the battle for al-Bab, mostly in Turkish airstrikes since August, according to the Syrian Observatory for Human Rights. Fighting has left the city in ruins and thousands of residents trapped without food and water.