Will Turkish army advance to Raqqa, try to hold on to al-Bab or end the operation and go back to Turkey? 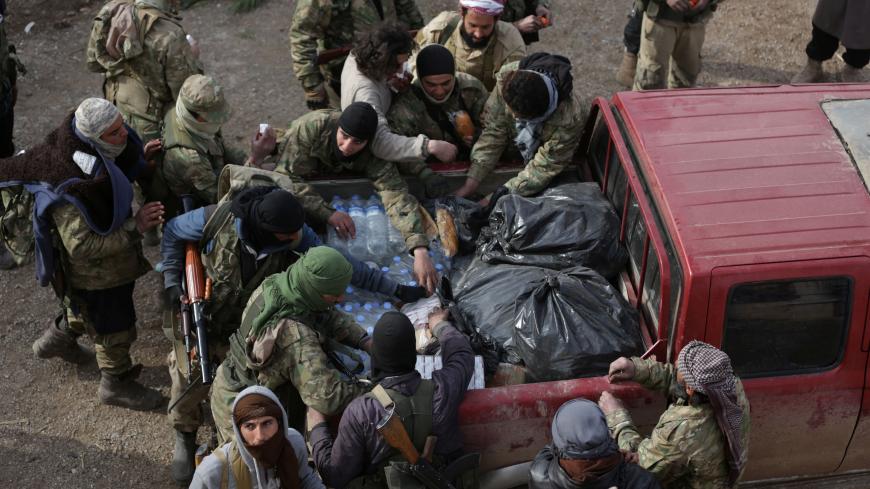 Rebel fighters gather around a pickup truck carrying food on the outskirts of the northern Syrian town of al-Bab, Feb. 8, 2017. - REUTERS/Khalil Ashawi

Turkey’s Operation Euphrates Shield, which entered its 170th day Feb. 11 having seen the loss of 65 Turkish soldiers, is at its most critical juncture. In an operation launched the night of Feb. 7 from Aqil Hill, a dominating feature west of al-Bab, about 1,300 Turkish troops (700 commandos, 400 tank personnel and about 200 special forces) and nearly 2,000 Free Syrian Army (FSA) fighters took part. Thirteen Turkish soldiers were killed in the operation. Security sources told Al-Monitor that about 800 Islamic State (IS) militants and 10,000 civilians are still in the town center of al-Bab. IS uses these civilians as "live shields," and the Turkish army and the FSA now face tough urban warfare as they move toward the town center.

As of noon Feb. 11, Turkish troops and the FSA had captured al-Bab silos, the al-Bab Sport Center in the west and the Zahra Mosque area in al-Bab's northwest. Turkish military sources said they have secured 25% of the town center and that heavy clashes are ongoing in the western and northern neighborhoods of al-Bab.

On another nearby front, the Syrian army and its allied militias have seized the Abu Taltal area about 2 miles to the south of al-Bab and are pushing toward the town. If this advance continues, in a day or two the Syrian army and its allied militias will be entering al-Bab, raising the specter of a clash between Turkish army/FSA forces and the Syrian army. There are already reports of rocket exchanges and occasional clashes between the FSA and Syrian army militias to the southwest of al-Bab. In short, the ground has become hot at al-Bab and the next week or so may well determine the fate of Turkey’s Operation Euphrates Shield that was launched Aug. 24.

There were two other important recent developments. First was the arrival of CIA chief Michael Pompeo to Ankara on Feb. 9. We were told that on the agenda of his meetings in Ankara were combating IS, the Raqqa operation, the future of Syria, Shiite militias in Iraq and Syria, the latest situation in Mosul and the Kurdistan Workers Party's Syrian offshoots the Democratic Union Party and the People's Protection Units (YPG), which Turkey considers terrorists. Ankara was also prepared to strongly raise the extradition of Gulen movement leader Fethullah Gulen from the United States.

The other major development was in the field. At 8:40 a.m. on Feb. 9, a Russian warplane that took off from Syria’s Khmeimim air base hit a building near al-Bab. Three Turkish tank personnel quartered in the building were killed and 11 others were wounded.

Kremlin spokesman Dmitry Peskov said of the attack that killed the Turkish soldiers, “Russian planes were operating according to coordinates supplied by our Turkish partners. There shouldn’t have been any Turkish soldiers at that location.”

The Turkish military command reacted quickly to the Russian claim. Chief of Staff headquarters said that Turkish soldiers had been at the same location for the previous 10 days and that their coordinates were confirmed to Russians at 11:11 the night before.

In a previous such incident in November, three Turkish soldiers were killed in attack by a Syrian plane.

The question to ask is whether this "friendly fire" attack that coincided with the Ankara visit of the CIA director was an accident Russia wasn’t fully responsible for or whether Russia wanted to teach a lesson to Turkish officials not to get too close to the United States as they were conferring with Pompeo. Russia, in its explanation, said that it prepares target lists with information the Syrian army provides from the ground and that this intelligence data is coordinated with Turkey, indicating the fatal attack wasn’t really all Russia's fault.

What is interesting is that it is not Russia but Turkey that is striving to prove it was an accident and downplay it. However, many in Turkey believe the Syrian army might have manipulated the field intelligence and intentionally misled the Russian air force to attack the Turkish soldiers. This "Assad has misled Russia" thesis is popular in pro-government circles in Ankara.

Kerim Has of Moscow State University told Al-Monitor he doesn’t believe Russia was seeking to punish Turkey. “Anyway, Turkey has been carrying out its operations in northern Syria mostly within the parameters drawn up by Russia. Moreover, Moscow has managed to get Ankara to support Russia’s ‘new Syria’ approach. The best two recent examples of this were Ankara’s lack of reaction to the Russian proposal for cultural autonomy for Syrian Kurds in the draft Syrian constitution and Ankara’s apparent easing of its demands for Assad to give up his post,” he said.

Has said the Russian air attack on Turkish soldiers indicates a serious deficiency in intelligence cooperation between NATO member Turkey and Russia in the al-Bab region. ‘‘Russia, to maximize its interests in Syria, will want to use Turkey’s pain from this incident and push for deeper cooperation in military and especially in intelligence fields. We should not be surprised by a more intense joint military planning in their Syria operations,” he added.

Of course, the United States would not be very pleased with closer Russia-Turkey military-intelligence relations.

Has also doesn’t believe that Russia will approve of the expansion of Turkey’s sphere of influence in northern Syria to totally dominate the al-Bab region. He doesn’t think Russia will look favorably upon Turkey’s participation in a Raqqa operation after al-Bab.

Al-Bab is attributed strategic significance by Turkish public opinion, with mostly chauvinistic media reporting and constant bombastic references to it by top officials. Whether al-Bab is captured is important for domestic political consumption, as the referendum on an executive presidency nears. The liberation of al-Bab before the April 16 constitutional referendum on presidential powers could be played up by the Justice and Development Party government as a Turkish military victory.

But al-Bab is gradually losing its strategic importance in the war against IS as the emphasis shifts to Raqqa. About 220,000 civilians live in Raqqa and about 10,000 IS militants are deployed there. Will IS defend Raqqa to the end, as it is doing at Mosul and al-Bab? IS defenses and fortifications in Raqqa and in its periphery suggest it will be a fight to the end. Clashes in Raqqa, more than a special forces operation, will be conventional urban warfare where tanks, heavy armor and artillery will have to be used. The infantry assault against Raqqa today is mostly by the heavily Kurdish YPG in the Syrian Democratic Forces (SDF). This force has already reached 8 miles from the north and northwest of Raqqa as part of the Wrath of the Euphrates Operation. The key question now is who will provide the heavy armor (tanks and armored fighting vehicles) and long-distance artillery that will be badly needed. Without sufficient armor and artillery support, the SDF will not be able to clear out Raqqa, even with US air support.

That may explain why James F. Jeffrey, a former US ambassador to Ankara, says a Turkish army-SDF combination supported by the US is an indispensable requirement to liberate Raqqa.

Here are the available options for those that will participate in the Raqqa operation:

All these options have a major problem: The United States and Russia have not decided whose influence will dominate Syria’s north. I believe Russia thinks of all of northern Syria as its area of influence, while Americans see the east of the Euphrates as the US zone of influence and the west of it as Russia’s. As this US-Russia imbroglio about northern Syria plays out on the field as more blood and tears, it is time for those in Washington and Moscow to decide what they want and play their cards honestly.