Though Turkey and Russia are working ever more closely together in Syria, the two cautious allies are holding back over their policy disconnects and incidents like the Russian airstrike that killed four Turkish soldiers near al-Bab. 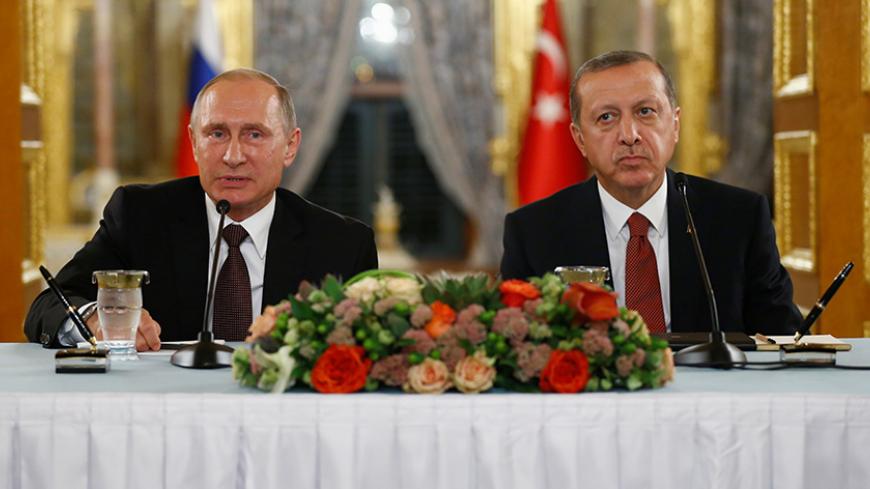 Despite Turkey's fast-developing political and economic ties with Russia and the cooperation between the two countries in Syria, doubts are emerging on the Turkish side. Russian statements also show that the relationship is not a bed of roses.

Moscow’s push for a secular constitution for a federated Syria has ruffled Turkish feathers. Ankara wants Syria’s Islamic character preserved and is cool toward any federated settlement that includes the Kurds.

Turkish suspicions about Russia's motives were amplified last week after a Russian airstrike on Feb. 9 killed four Turkish soldiers and left others wounded on the outskirts of al-Bab.

In a flurry of phone calls to Ankara — including one from Russian President Vladimir Putin to Turkish President Recep Tayyip Erdogan — Moscow acknowledged that Russian jets had carried out the strike and offered words of regret.

The incident comes at a time when Turkey and Russia are said to be coordinating their military activities in Syria, especially around al-Bab. There is an effort to prevent a military standoff between Turkish-supported Free Syrian Army (FSA) elements and the Syrian army south of the town as well as a potential Turkish-Syrian confrontation.

Russia did not offer a full apology, trying instead to pin the blame for the incident on the Turkish side. The Russian position was put forward hastily by Kremlin spokesman Dmitry Peskov, who told the Russian media, "Unfortunately, our military, while carrying out strikes on terrorists, was guided by coordinates given to them by our Turkish partners, and Turkish servicemen should not have been present on those coordinates.”

The Turkish denial came fast: Turkish forces had been in the same place for 10 days, and their coordinates had been provided to the Russian military both in Syria and in Ankara. The coordinates were supplied again Feb. 8 — a day before the friendly-fire incident — after a missile was launched from Russian-held territory toward opposition groups supported by Turkey.

Ankara is trying to downplay the incident, clearly not wanting a crisis with Moscow at this critical moment in Syria. Turks, however, are upset and confused, even angry.

Right-wing Nationalist Movement Party leader Devlet Bahceli had harsh words. “Russia martyrs our soldiers and tries to brush this aside with a simple ‘Pardon me,’” Bahceli said. “It also comes out and brazenly blames our military. This is wrong. This is shameful. This disregards international law. What is Russia’s aim? What is it trying to do?” he asked furiously.

Akif Beki, a former press secretary for Erdogan who now writes for Hurriyet, believes Moscow must take full responsibility for the incident. In a Feb. 12 article, he recalled that Moscow had turned the downing of a Russian jet by Turkey in November 2015 to its advantage. Beki argued that Turkey should do the same now, especially after the Turkish military’s statement.

“If this was not a planned act that was given the appearance of an accident, they should come out and apologize,” Beki wrote. He went on to touch on another issue that has the potential to cloud ties between Ankara and Moscow: reports that Moscow is mediating between the Syrian Kurds represented by the Democratic Union Party (PYD) and the regime of Syrian President Bashar al-Assad, also confirmed by Foreign Minister Sergey Lavrov. “They should also explain properly why they don’t recognize the [Kurdistan Workers Party] PKK as a terrorist organization, and what it is that they are mediating between the PYD and Assad.”

Lavrov told the Russian press that the government believes such intra-Syrian dialogue is useful, stressing significant potential for agreements between Damascus and the Kurds.

Turkey sees the PYD and its military wing, the People's Protections Units (YPG), as terrorist groups linked to the outlawed PKK. Turkey’s problem is compounded, however, by the fact that the United States is working closely with the YPG against the Islamic State (IS), and the United States believes, like Russia, that the Kurds must have a say in any settlement.

Ankara’s main effort in Syria is focused on preventing these groups from gaining political or territorial ground. It was already riled after a senior Russian diplomat went on record recently as saying that Russia doesn’t see the PKK or the YPG as terrorist groups.

“These two organizations are not accepted officially as terrorist organizations. This is a fact and that’s the way it is,” Alexander Botsan-Kharchenko, the head of Fourth European Department at the Russian Foreign Ministry, told the RIA agency.

Erdogan, however, continues to tread lightly with Russia. Government supporters are also trying to deflect blame from Russia for the friendly-fire incident.

Nuri Elibol, who writes for the Islamist daily Turkiye, blamed Iran and the Assad regime, who he wrote “are working day and night to spoil Turkish-Russian ties.” Elibol, who has links to official circles, claimed this is the way the Turkish government sees the matter.

Meanwhile, Erdogan is keeping public attention focused on the push by Turkish forces and FSA fighters in al-Bab, where important advances have reportedly been secured against IS. He is saying this operation will have new targets after the liberation of the town.

A Russian announcement that an agreement was reached with Ankara over a line of demarcation just south of al-Bab means, however, that further Turkish and FSA advances to the south will not be possible.

Russia reportedly intervened to stop clashes between the Turkish and FSA forces and the Syrian army, which is also approaching al-Bab. There was no official statement from Ankara, but government sources confirmed the demarcation line to the press. Putting a positive spin on it, they also said the Syrian army’s advance toward al-Bab had been stopped.

Erdogan said in late January that once “the job was concluded” in al-Bab, there would be no need to move farther south.

Retired Ambassador Unal Cevikoz believes the demarcation line south of al-Bab “shows that Turkey’s Operation Euphrates Shield has reached the limit acceptable to Russia and the Syrian regime.” Cevikoz argued in an article for Hurriyet that the “friendly-fire incident” can also be seen as a warning in this context.

Erdogan told reporters on Feb. 13 during a visit to Bahrain that the next target of Euphrates Shield after al-Bab would be Manbij and then the IS stronghold of Raqqa, if agreement can be reached with the US-led coalition. It will require working closely with the United States, whose allies, including the YPG, are holding Manbij, where they are preparing to move on Raqqa. However, Washington seems unlikely to meet the Turkish demand that the YPG leave Manbij.

Nevertheless, sources close to the government say that Ankara was encouraged by Erdogan’s recent phone conversation with US President Donald Trump and his talks with the CIA’s new chief Mike Pompeo in Ankara Feb. 9.

A Western diplomat speaking to Al-Monitor on condition of anonymity said Turkey may veer toward the United States again soon out of necessity. He said a clear sign of that would be if a formula can be found for Turkish participation in the Raqqa operation, which will also include the YPG.

“Turkey keeps wavering between Russia and the United States but can’t seem to find the sweet spot between them,” the diplomat said.

In the final analysis, Turkey’s reliance on Russia in Syria appears to be exaggerated. Botsan-Kharchenko said there are still many differences between the two countries despite their efforts to work together more closely.