With the Pentagon close to producing new plans to defeat the Islamic State in Syria, the Kurdish People’s Protection Units and Turkish leaders both insist that the United States will pursue an alliance with them, and US officials keep feeding hopes on both sides. 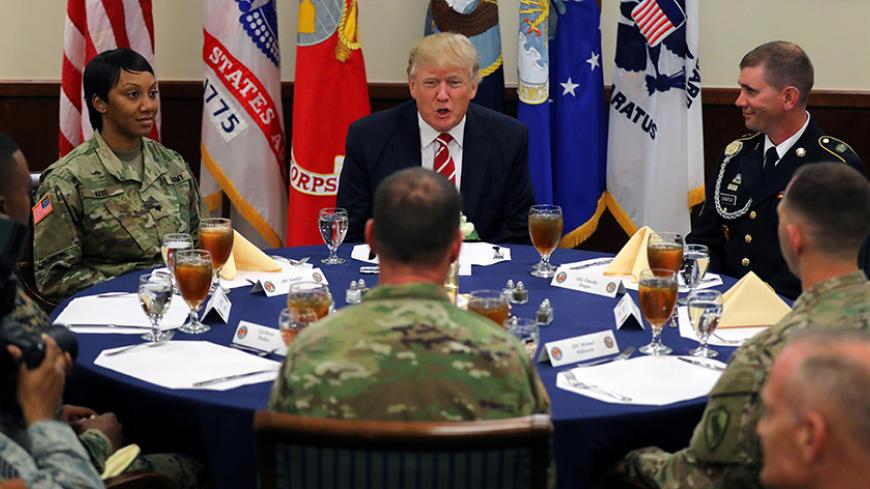 US President Donald Trump attends a lunch with members of the US military during a visit at the US Central Command and Special Operations Command headquarters in Tampa, Florida, Feb. 6, 2017. - REUTERS/Carlos Barria

With a Feb. 28 deadline for the Pentagon to deliver revised plans to defeat the Islamic State in Syria fast approaching, speculation is rife as to what they will contain and the main players are spinning their own versions of a likely outcome.

The Syrian Kurdish People’s Protection Units (YPG) and their Arab allies who operate under the umbrella of the Syrian Defense Forces (SDF) insist that the Pentagon will pursue its alliance with them, culminating in the liberation of Raqqa. Turkish leaders, who are infuriated by the partnership because of the YPG’s close links to Kurdistan Workers Party (PKK) rebels fighting for autonomy inside Turkey, keep hinting that the Donald Trump administration is ready to see things their way, ditch the Kurds and embrace Turkish plans to do the job with Free Syrian Army rebels. And in a replay of the Barack Obama administration’s efforts to juggle relations with Turkey and the Syrian Kurds, US officials keep feeding hopes on both sides.

For all the Trump administration’s professed contempt for its predecessors’ approach to Syria, it appears their overriding goal is the same: to defeat IS. Once the Obama administration walked away from regime change, all pretense of nation-building and promotion of democracy in Syria was dropped. The new administration has displayed no interest, either. And, as Al-Monitor reported last week, a high-level Turkish delegation that lobbied administration officials in Washington to scrap ties with the Syrian Kurds came away largely empty-handed.

So where do things currently stand? Based on off-the-record exchanges with officials who are involved in the process, here is what we know:

The Pentagon, and the US Central Command in particular, are in favor of proceeding with the SDF. Should their recommendations be heeded, Trump will sign a special legal dispensation known as Section 1209 that authorizes the Pentagon to train and equip nonstate armed groups ahead of a planned operation to take Raqqa proper. Before doing so, Washington will peruse the final draft of Turkey’s proposed blueprint to take Raqqa as agreed between Turkey’s Chief of General Staff Gen. Hulusi Akar and Chairman Joint Chiefs of Staff Gen. Joseph Dunford during their Feb. 17 meeting at the Incirlik Air Base. Turkey is said to have until Feb. 27 to submit its own plans. US officials are genuinely concerned that Turkey will make good on its promise to drive the YPG out of Manbij once it's finished with al-Bab. Turkish officials announced today that the three-month-old operation to win control of al-Bab is all but completed.

Various versions of the existing Turkish offer for Raqqa have been widely reported, including by Al-Monitor’s Fehim Tastekin and Metin Gurcan.

But Washington remains unconvinced that any of them can work for logistical and other reasons that have been amply covered. It is above all skeptical about the numbers and the battle-readiness of an Arab force that the Turkish army is said to be training inside Turkey, so much so that according to Nicholas A. Heras, an analyst at the Center for a New American Security, the US military mocks the Turkish-backed group as a “Unicorn Force.”

To assuage Turkish concerns about the YPG the United States will, among other things, go out of its way to prove to Turkey that the group will not be allowed to run Raqqa once it's captured. For it to do so is hardly realistic, anyway, given that Raqqa is a Sunni Arab city and that some of the more influential Arab tribes in the area are deeply hostile to the YPG and its left-wing ideas.

Moreover, the latest US thinking as reflected by a recent article in The Washington Post is to stay out of governance in Raqqa and the whole of Syria, for that matter.

Once the city is captured and water and electricity restored, Washington is said to be leaning toward leaving things there. In other words, to not immerse itself in helping to establish local councils and other trappings of an administration, as it did in the mainly Arab towns of Manbij and Tell Abyad, which the SDF captured with US backing. The idea of inserting the Turkish-trained Arabs as part of a holding force in Raqqa is on the table.

At the same time, Washington appears to have backed away from its earlier view that the YPG’s political arm, the Democratic Union Party (PYD), should also represent the Kurds at the latest round of UN-sponsored peace talks between the Syrian government and opposition that kicked off in Geneva today. The PYD isn’t there.

Meanwhile, the United States is said to be upping its intelligence cooperation with Turkey to help pinpoint PKK targets in the mountains of Iraqi Kurdistan. All of this should help quell Turkish fears about the emergence of a US-mentored Kurdish-run statelet on its borders. But Turkey is unlikely to be satisfied.

Some analysts have suggested the best way around this dilemma is to indefinitely postpone all plans to take Raqqa. “Seems more likely that the alternative to a near-term SDF operation is not 'Turkey/FSA in a year,' it's 'no one, indefinitely,'" tweeted Sam Heller from the Century Foundation.

That situation may suit the Syrian Kurds just fine. Since the start of the Syrian uprising, the Kurds have displayed a remarkable ability to take maximum advantage of events on the ground, adapting to the dizzying shifts in power balances, playing at once with the Russians and the United States and holding the regime at bay. But they have reached the limits of their territorial expansion and with Turkish forces firmly wedged between their eastern and western cantons, the chances of their being able to link them for now appear to be low. Besides, the prospects that Washington will recognize the Syrian Kurds' self-declared Northern Syrian Federation are fading by the day. Against this background, the Syrian Kurds have little interest in engaging in a battle that is likely to be very bloody and with no immediate benefit for their cause.