Ankara's Syrian plan falters as Moscow sets up in Afrin

Turkey's move to enlist the Russians against the Syrian Kurds is not working out, as both the United States and Russia deepen their ties with the Syrian Kurds and Operation Euphrates Shield appears to have reached the limits of its expansion. 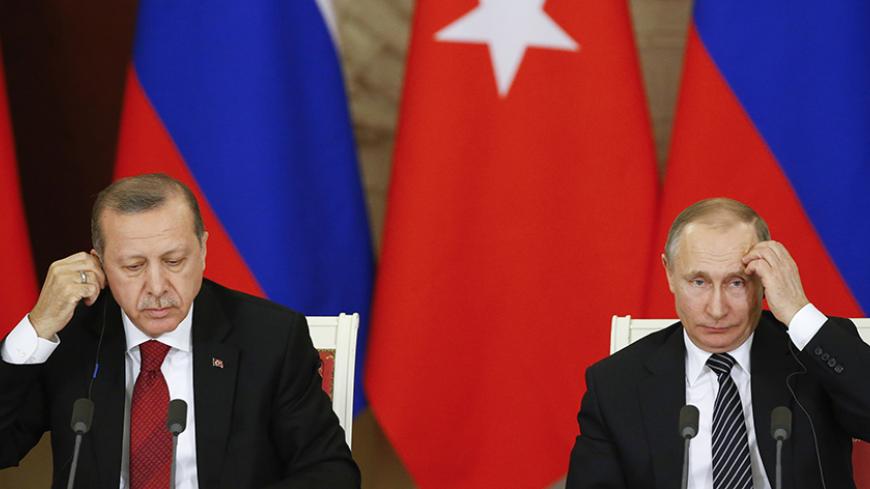 Turkey’s last-ditch efforts to harness Russian military and diplomatic heft to counter the Syrian Kurds and unravel their alliance with the United States are showing few signs of succeeding, like much else in the country’s ill-fated Syrian policy.

If anything, both the United States and Russia are steadily deepening their ties with the Syrian Kurdish People’s Protection Units (YPG) and its Arab allies who operate under the umbrella of the Syrian Defense Forces (SDF). And viewed from Ankara, they are doing so at Turkey’s expense.

The latest blows came from Russia. Foreign Minister Sergey Lavrov cranked up pressure on Turkey today to drop its long-running objections to the participation of the YPG’s political arm, the Democratic Union Party (PYD), in the Geneva peace talks. “We will continue to look for solutions to this issue with our Turkish partners … but it is not possible to postpone it in the long run,” Lavrov said.

On March 20, the YPG declared that Russia is setting up a military base in the northwestern region of Afrin to help train its fighters in “modern warfare techniques.” YPG spokesman Redur Xelil declared that it was the first agreement of its kind. Russia denied that it is establishing a base.

The facility in question, said Moscow, is a branch of its “reconciliation center” that helps enforce truces between warring parties in Syria. But Turkey isn’t buying it. A Turkish official complained to Hurriyet Daily News that Russia failed to inform Turkey of its plans and that it could have done its monitoring from its large base in Hmeimim.

The official added that Turkish intelligence had spotted four Russian military vehicles making their way to Afrin, though he did not explain the observation's significance.

In any case, Turkey feels targeted, and its suspicions may be justified. An SDF commander contacted via WhatsApp in northern Syria told Al-Monitor, “The main purpose of our alliance with Russia is to keep Turkey off our backs.” The commander, who requested anonymity, added, “They went after us in Manbij and when that failed they began attacking us in Afrin.”

He was referring to a spate of Turkish attacks against SDF forces in areas west of the town of Manbij. Turkey has repeatedly demanded that the YPG and the PYD leave the mainly Arab town that was captured from the Islamic State with the help of United States last August. Manbij falls to the west of the Euphrates River, and Turkey insists that the Syrian Kurds confine themselves to the east of the river, calling the matter a “red line.”

Further Turkish attacks were pre-empted when the SDF struck an unexpected deal to allow Russian-backed Syrian regime forces into areas that were being targeted by Turkey and its Free Syrian Army allies.

At the same time, US special operations forces beefed up their presence to the east of Manbij, sending a stark message to Turkey to back off.

Sam Heller, a Beirut-based fellow with the Century Foundation, told Al-Monitor, “The PYD-YPG seems to be surrounding itself with as many powerful international allies as it can to pre-empt a possible Turkish attack. It not clear how long this can work, but at least for now it seems to have left Turkey with very few good options.” And as Heller observed, Turkey has been excluded from coalition plans to capture the jihadis’ so-called capital Raqqa.

While the United States has yet to formally announce its decision to proceed with the SDF, the campaign to conquer Raqqa is already in full swing. The SDF commander said, “The operation to capture the Tabqa Dam began last night.” Located in central Raqqa province, the dam is Syria’s largest. SDF forces are planning to cross the Euphrates River along the dam and seize the eponymous IS-held town, a key point along the road to Raqqa.

US officials confirmed that an offensive to take Tabqa is underway.

The commander noted, “Russia and the regime will not be happy because they want to control Tabqa.” His comments highlight the YPG’s thus far winning strategy of playing the United States against the Russians and the regime and of coordinating with all three when it comes to fending off the Turks.

Turkey’s strongest card is its long border with Syria and continued influence over assorted Syrian rebel groups, which it has united under the Euphrates Shield command. Since August, Turkey and its rebel allies have cleared the Turkish border of IS forces and after a bloody and protracted offensive captured the IS-controlled town of al-Bab last month. But firmly hemmed in to the east by Russian, Syrian regime and US forces and now to the west by Russian forces in Afrin, Euphrates Shield appears to have reached the limits of its expansion.

The recent split in Ahrar al-Sham, one of the most powerful rebel factions in Syria, with its top leaders defecting to the Jabhat al-Nusra-dominated and al-Qaeda-linked Hayat Tahrir al-Sham, will have further weakened Turkey’s hand.

Heller believes so, saying, “The split may actually have increased Turkish leverage on post-split Ahrar, which has shed its most difficult members. But the ascendancy of Hayat Tahrir al-Sham has, more generally, weakened the non-jihadist opposition — including Ahrar — and thus Turkish influence.”

What if in a last reckless gamble, Turkey were to attack the Syrian border town of Tell Abyad, as it has been itching to do for some time?

The mainly Arab town was one of the early prizes delivered with the help of sustained coalition airstrikes to the YPG in June 2015. Controlling Tell Abyad would allow Turkey to drive a wedge inside the wide band of YPG territory running from the Iraqi border all the way to Manbij. That, however, “would be a sign of less useful Turkish influence, not more,” said Heller.