US move to protect YPG could push Turkey into Russia's arms

US special forces have deployed along Syrian border to deter Turkey from further attacks against Syrian Kurdish forces but the United States has no sway over Russian-dominated northwestern Syria, prompting conjecture about a possible Russian-Turkish deal for Idlib. 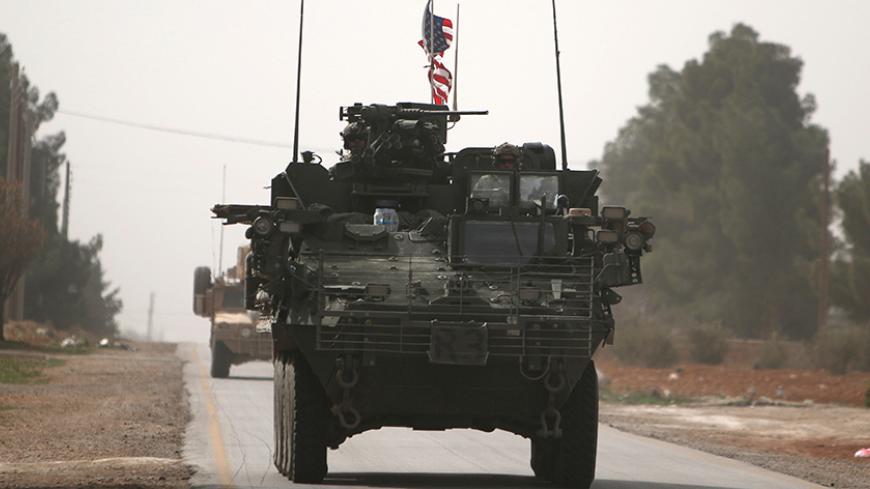 The deployment of US special forces along the Syrian border in a bid to deter Turkey from carrying out further attacks against their Syrian Kurdish allies has done little to melt Turkish resolve. Turkey’s President Recep Tayyip Erdogan said he was “seriously saddened” by the images of US military convoys with the American flag accompanied by members of the Syrian Kurdish People’s Protection Units (YPG) but that Turkey will continue its fight against the “terrorists.”

In separate comments ahead of an official trip to India that kicked off today, Erdogan declared, “I could come unexpectedly, at any time.”

The lyrics borrowed from a classic Turkish love song are not taken lightly by the YPG, which is still reeling from a wave of Turkish airstrikes on April 25 that targeted Mount Karachok near the town of Derik and left 25 militants dead.

The attacks were not coordinated with the US-led coalition, which the Turkish military gave only 52 minutes' notice to get its forces out of harm’s way. The unilateral move provoked deep anger among administration officials and prompted the US military to deploy along the border in an unprecedented show of solidarity with the YPG.

The US presence makes it unlikely that Turkey will move against the YPG in areas it controls east of the town of Manbij. Turkish troops are reportedly gathering across the border town of Tell Abyad, but those actions are more likely linked to Turkish offers to help the coalition dislodge the Islamic State from Raqqa. The fastest way for Turkish troops to get to Raqqa is through Tell Abyad. Turkey has been pressing the United States to dump the SDF and to team up with Turkey and Arab rebel forces in their stead. Erdogan is expected to renew the offer when he meets with President Donald Trump in Washington on May 16. However, administration officials speaking to Al-Monitor on strict condition of anonymity described the Turkish scheme as a non-starter.

Turkish forces and their Free Syrian Army allies are said to be focusing instead on the town of Tal Rifaat, which lies between the Kurdish-controlled enclave of Afrin and Al Bab and Azaz, both strongholds of the Turkish-led Euphrates Shield Turkmen and Arab force. Tal Rifaat, which was run by a mix of rebels including al-Qaeda-linked Jabhat al-Nusra and Ahrar al-Sham, fell to the YPG and its Arab partners in January 2016.

The YPG is determined to connect Afrin to the territories it holds east of Manbij, thus creating an uninterrupted swath of Kurdish-controlled lands. Turkey thwarted those plans when its forces entered Jarablus in August 2016, going onto capture al-Bab in February after a long and bloody battle against IS. If Turkey wrests control of Tal Rifaat, that will make the establishment of a Kurdish corridor even harder. Nicholas A. Heras, a senior fellow at the Center for a New American Security, told Al-Monitor, “Tal Rifaat is a point from which the Turkish military could garrison and lay siege to Afrin.

A commander from the Syrian Democratic Forces (SDF), the YPG-led army uniting Arabs and Kurds trained by the United States to fight IS, told Al-Monitor that a Turkish play for Tal Rifaat was afoot and that Russian military advisers in Syria had warned them of an “imminent” Turkish attack. The commander said Turkish and FSA forces would likley move on Tal Rifaat from their positions near al-Bab and Azaz. Russia has called on the YPG to let Syrian regime forces move into the area to pre-empt any such moves, but the SDF has refused. In February, the SDF denied reports that it handed over control of Tal Rifaat to Syrian regime forces and hoist the Syrian flag to halt the advance of Euphrates Shield.

The United States has no sway over northwestern Syria and there is little it can do to stop Turkey from going after the YPG in either Tal Rifaat or Afrin if it so chooses. Russia, which commands this area's airspace, can. Thus when Turkish forces stepped up cross-border artillery attacks against Afrin in March, Russian forces deployed to the village of Bulbul close to the Turkish border. Russia claimed its actions were part of its cease-fire monitoring efforts between the warring parties in Syria. Similarly, it moved its forces to villages west of Manbij together with some regime troops, again to fend off a Turkish attack. The gambit served the dual purpose of allowing the regime to encroach on Kurdish-held territory.

According to SDF sources, Russia has now warned the YPG that unless it allows Sryian regime forces into Tal Rifaat, it cannot guarantee protection against a Turkish grab. “The Russians are saying different things to different parties, but the aim appears to be to give the regime greater control,” the SDF commander said.

All of this has intensified conjecture about a possible Russian-Turkish deal for Idlib, which borders Turkey. The province is dominated by Jabhat al-Nusra’s latest iteration, Hayat Tahrir al-Sham (HTS), which continues to pose the most serious threat to the Syrian regime. Sam Heller, a Beirut-based senior fellow at the Century Foundation, recently observed that if the group “cannot be defeated from inside Idlib, maybe it could be defeated from without. Turkey in particular seems best positioned to intervene and dislodge it."

While Turkey is unlikely to physically do so, some analysts say it could help Russia to finish the job. Fabrice Balanche, a senior fellow at the Washington Institute for Near East policy, told Al-Monitor, “If Russia wants to bomb HTS targets close to the border and the Jebel Turkmen mountain, access to Turkish airspace would expand its maneuvering space.” Balanche added, “Don’t forget that Turkey shot down the Russian jet in November 2015 when it strayed into Turkish airspace trying to do that.”

Balanche speculated that the contours of such a deal could see regime troops moving into Tal Rifaat, which would satisfy Turkish fears about the Kurds linking their cantons and Russian forces continuing to defend Afrin proper from Turkish shelling. But any such plans have a big hole in them. What would happen if the Russians used Turkish airspace and ended up killing hundreds of civilians, as they often do? Turkey’s credibility with the Syrian opposition would be horribly dented and hundreds of thousands of Syrians would seek refuge in Turkey, which is already host to some three million Syrians fleeing the war.

Heras argued that Russia does not need Turkish airspace to target HTS. “What would be more useful for Russia would be actionable information from Turkish intelligence on the location of key HTS leaders and operatives.” However, Russia and the regime have generally targeted armed opposition groups with little regard for their affiliation to al-Qaeda or IS. “So the Russians deciding to make al-Qaeda a priority would be a shift in their targeting priorities,” Heras noted. This would sit well with the United States, which sees HTS as potentially as dangerous as IS. Thus, Turkey could see this as an opportunity to chalk up brownie points in Washington as well.

In any case, as Heras says, the YPG and the SDF are “dependent on the the goodwill and motivation of bigger players — Russia and the US — to maintain the autonomy of the areas it controls." The same could be said about all of Syria’s competing groups and second-tier powers Turkey and Iran will always be in the mix.