Military experts say taking Afrin will be a tactical success for Ankara, but Turkey’s Kurdish concerns in Syria appear to be far from over. 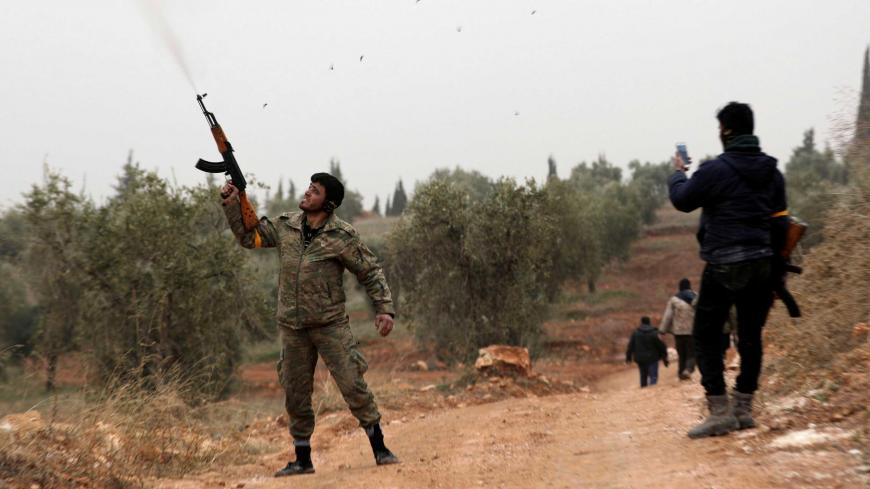 It’s too early to say what Turkey’s military offensive on Afrin, code-named Operation Olive Branch, will produce with regard to Ankara’s long-term expectations in Syria.

Nevertheless, one has to hand it to President Recep Tayyip Erdogan. He achieved a major coup with this operation against the Syrian Kurdish People's Protection Units (YPG), a group Ankara says is a terrorist organization that threatens Turkey.

Whatever others may say, this sort of situation leaves a leader looking strong in the eyes of his people. Erdogan has therefore scored major political points at home, which he will use all the way up to the 2019 presidential elections.

Turkey is also now poised to gain more territory in northern Syria with the help of thousands of Free Syrian Army (FSA) fighters. It can add this to the territory it captured under Operation Euphrates Shield, which it mounted in August 2016.

Prime Minister Binali Yildirim says the initial aim is to secure a safe zone 130 kilometers (80 miles) long and 20-30 kilometers (12-20 miles) deep along Turkey’s border with Syria, before moving to the city of Afrin and other key towns in the district held by the YPG.

Erdogan was also emboldened by the generally deferential international responses to Turkey’s operation. The United States and Europe have expressed “concern” and are calling for “restraint.” More to the point, though, they are expressing an understanding of Turkey’s needs to secure its borders.

Noting that Turkey was the only NATO member with an active insurgency inside its borders, US Defense Secretary James Mattis told reporters as he was flying to Asia that “Turkey had legitimate security concerns” in Syria.

He was referring to the violent separatist campaign in Turkey by the outlawed Kurdistan Workers Party (PKK), which has close ties to the YPG. Mattis also said Turkey had acted “candidly” and advised Washington before launching its operation, adding that they are “working now on the way ahead."

These are interesting remarks given that Washington has been arming the YPG and is now in the process of establishing a 30,000-strong force made up mostly of YPG fighters along Turkey’s borders east of the Euphrates River.

Turkey also informed members of the United Nations Security Council and countries with a stake in Syria, such as Iran, of its intentions in Afrin before mounting its operation.

It is also evident that Ankara got a green light from Moscow, given the sorties by 72 Turkish jets on the first day of the operation — a fact underlined by Kirill Semenov, the head of the Moscow-based Islamic Research Center of the Institute of Innovative Development.

"Turkey’s operation in Afrin could have only happened as a result of agreements with the Russian side, particularly taking into account the fact that the Turkish air force used Syrian airspace," Semenov told the Russian daily Kommersant.

Refusing to admit outright that Turkey was given the green light, Russian Foreign Minister Sergey Lavrov blamed the United States for this operation. “Unilateral actions by the United States in Syria infuriated Turkey,” he said at a press conference in Moscow on Jan. 22, referring to the US military support for the YPG.

Lavrov’s remarks were also interesting since Moscow has also been providing political and a degree of military support to the YPG. Nevertheless, the YPG’s reliance on Moscow to stop Turkey from attacking Afrin appears to have been seriously misplaced.

After Turkey launched its operations, Russia relocated its forces in Afrin to a safer area. Angry YPG commanders are accusing Moscow now of betraying them in Afrin.

Turkey’s operation is, in fact, more of an embarrassment for Moscow than Washington. The United States has been underlining that, unlike Russia, it has no forces in Afrin, which it says is not part of its area of operations in Syria.

Ankara’s move still has US officials worried, because Erdogan is warning that the YPG-held city of Manbij — immediately west of the Euphrates — where the United States has forces deployed, will be Turkey’s next target.

A Pentagon spokesman told the daily Hurriyet, without naming Turkey, that its forces in Manbij will defend themselves and their allies against any attack.

Erdogan’s remarks about Manbij come at a time when US Secretary of State Rex Tillerson has spelled out the reasons why US forces in Syria are there for the long haul.

In a speech at the Hoover Institute at Stanford University, Tillerson also outlined Washington’s plan for setting up local administrations in areas where these forces are deployed. Those areas include Manbij and a swath of territory larger than Lebanon along Turkey’s border east of the Euphrates.

Analysts say an operation by the Turkish army against Manbij will be much more difficult than the operation against Afrin and could pit Turkish forces against US forces fighting alongside their YPG allies.

Former Turkish Chief of Staff Gen. Ilker Basbug believes that Washington is working to consolidate its presence east of the Euphrates and establishing a military force in the region to serve US strategy in Syria and against Iran.

“I am of the opinion that the United States is considering a federative structure in Syria. It could be trying to implement the Iraq model in Syria,” Basbug told Hurriyet in an interview.

Basbug also believes that the operation against Afrin is “useful” but will not solve Turkey’s real problem. “The main picture involves the structure east of the Euphrates. The miracle solution to neutralize this is for Damascus to regain control of its borders,” Basbug said.

Retired Brig. Gen. Naim Baburoglu agrees. “Turkey’s operation against Afrin is important. But it is ultimately a tactical move that will not meet its political objectives,” he told Al-Monitor. He said the same would apply to Manbij.

“The political objective will only be met when the threat to Turkey east of the Euphrates is neutralized,” Baburoglu said. He said the only way to achieve this is through peace with Damascus.

He said that Damascus, in addition to possibly legitimizing Turkey’s presence in Syria the way Russia’s and Iran’s presences are legitimate, can also "enable Turkey to cooperate with the Syrian regime in order to defeat the YPG.”

A Western diplomatic source told Al-Monitor on condition of anonymity that Turkey’s operation against Afrin will have redoubled Washington’s determination to secure its gains in northern Syria.

He added, however, that Turkey’s Afrin offensive could bring stability to a volatile part of Syria — a point that its Western allies could not disregard. “It will also mean that if radical groups operate outside of this region, Ankara will be accountable,” the diplomat said.

Meanwhile, Russia's determination to give the Kurds a say in any Syrian settlement continues to be a problem for Turkey. Ankara is pleased that Moscow has not invited the YPG to the Syrian National Dialogue Congress to be held in the Russian resort of Sochi later this month, and says Kurds will be represented by other groups.

Nevertheless, Russia’s intentions regarding the Syrian Kurds continue to raise concerns in Ankara. The worry is that Moscow, after having been accused of betraying the Kurds in Afrin, may be more resolved to have a Kurdish input in the Syrian talks that has not been watered down by Turkey.

Basbug, for one, believes that Moscow still wants to give the Kurds an autonomous region in Syria. If this turns out to be the case, the only area available is territory adjoining Turkey’s borders.

While Erdogan may be buoyed now due to the operation against Afrin, Turkey’s Kurdish concerns in Syria appear to be far from over.

Ankara may have to settle in the end for the territory it gained from the YPG with Operation Euphrates Shield and its current operation — unless, that is, it decides to strike while the iron is hot with an all-out attack against Manbij and the lands east of the Euphrates held by the YPG with US support. That, however, would be a very different ballgame than what it has today.