Reconciliation with Russia is preventing Turkish President Recep Tayyip Erdogan from blasting away at Syrian President Bashar al-Assad as he once did. 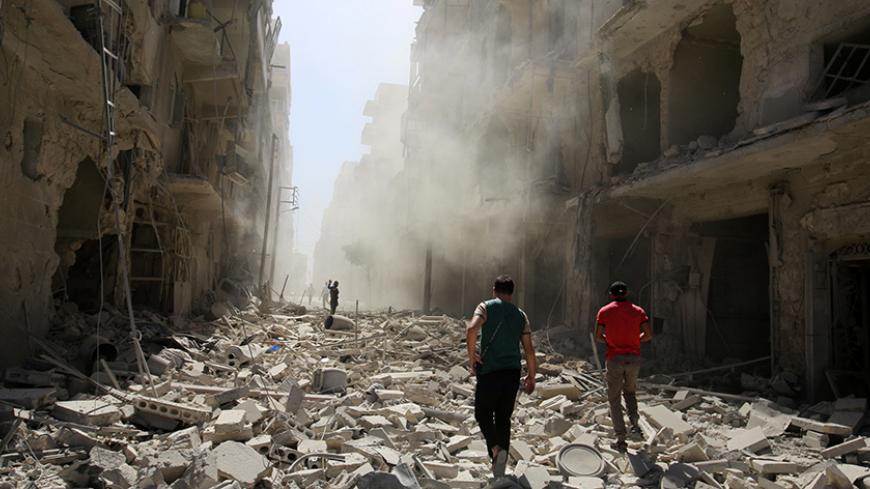 Men inspect the damage after an airstrike on the rebel-held al-Qaterji neighborhood of Aleppo, Syria, Sept. 25, 2016.

In the past, Turkish President Recep Tayyip Erdogan never missed an opportunity to thrash Syrian President Bashar al-Assad, calling him the “brutal dictator who kills his own people.” These days, however, Erdogan has been noticeably low-key in his criticism of the Syrian leader as his regime pounds Aleppo and, according to independent observers, commits war crimes. It is not difficult to fathom the reason behind Ankara’s reticence to take a tough line in keeping with its stance against such attacks in the past: Russia is also involved in the brutal operation against Aleppo.

During an Oct. 1 address to parliament marking the opening of the new legislative year, Erdogan only touched on the situation in Aleppo once in passing, without mention of anyone specifically while laying blame in general terms on the West.

“Those countries and societies that are merely watching the brutality as every innocent life is extinguished among the ruins of Aleppo will have to account for this in the face of history,” Erdogan said. He made no other reference to Aleppo although it was the topic dominating world headlines.

Erdogan preferred instead to talk at length about the Turkish military's operation in northern Syria, where it is backing fighters from the Free Syrian Army (FSA) against the Islamic State (IS) and the Kurdish People's Protection Units (YPG), the military wing of the Democratic Union Party (PYD), which Ankara accuses of being a terrorist group linked to the outlawed Kurdistan Workers Party (PKK).

Erdogan evidently does not want to endanger Ankara’s recent reconciliation with Moscow after ties hit rock bottom following the downing of a Russian fighter jet by Turkey in November 2015. The plane was shot down after it strayed momentarily into Turkish airspace while on a bombing mission against Turkish-supported Syrian rebels in northern Syria.

The subsequent Russian economic embargo, implemented at the personal instruction of President Vladimir Putin, who accused Ankara of “stabbing Russia in the back,” resulted in heavy losses for Turkey in trade and tourism revenues and contracts, not to mention potential losses in the energy field.

The political-military costs were also high. Turkey could not fly its jets into Syrian airspace without risking a retaliatory strike from Russia, and Moscow began to openly support the PYD and YPG.

Unable to continue bearing such costs, Erdogan was forced to apologize to Putin in June over the jet incident and to extend his condolences for the pilot killed in his parachute by Turkish-supported rebels. Ankara also offered to pay compensation to the pilot’s family. Erdogan subsequently traveled to St. Petersburg on Aug. 9 for a summit with Putin aimed at normalizing ties.

Meanwhile, pro-government circles have begun circulating a narrative arguing that the pilot who downed the Russian jet belonged to the Gulenist movement, which is accused of masterminding the failed July 15 coup attempt. The pilot is alleged to have acted on instructions aimed at destabilizing Turkish-Russian ties in order to undermine Erdogan and the ruling Justice and Development Party (AKP).

Russia and Turkey are currently engaged in a high-level military dialogue, which has included a rare visit by Russia’s chief of the General Staff, Gen. Valery Gerasimov, to Ankara for talks on Sept. 15 with his Turkish counterpart, Hulusi Akar. During the meeting, the two sides reportedly agreed on a mechanism that would prevent them from stepping on each other’s toes in Syria.

On the economic front, a delegation from the Turkish Union of Chambers and Commodity Exchanges (TOBB) visited Moscow the last week in September to break the ice and kick-start a “new era in economic ties.” TOBB President Rifat Hisarciklioglu told reporters that Putin is expected to visit Turkey in October for a meeting of the Intergovernmental Joint Economic Council.

These renewed contacts enable Ankara not only to recoup some of its economic losses, but also to regain the military advantages it lost in downing the Russian jet.

Fikret Bila, a veteran journalist and political commentator for the daily Hurriyet, talks of a “military trade-off” between Ankara and Moscow. “The reconciliation allowed Turkish forces to enter Syria and to operate in the region from Jarablus to Azaz in the west, and south toward al-Bab, without any objections from Moscow. Turkey in return agreed not to help rebel forces in Aleppo,” Bila told Al-Monitor.

He also noted that Turkey’s priorities in Syria have changed, saying, “What is important for Ankara now is to secure the region along its borders, and move south toward al-Bab. This is why it is relatively silent on Assad and on what is taking place in Aleppo.”

Retired Maj. Gen. Armagan Kuloglu observed that the downing of the Russian jet seriously harmed Turkey’s security interests by enabling the PYD to gain ground in Syria after Turkish forces were prevented by Russia from intervening in the region.

“Turkey backed the wrong horse, and this enabled the PYD to entrench itself near its borders with support from the United States,” Kuloglu said. “We say that we support Syria’s territorial integrity to prevent threats to our security, but who will secure this? Of course, the Syrian regime. We should not have been so opposed to this regime.”

Kuloglu added, “Cooperating with Damascus will enable Turkey to get rid of both IS and the PYD. I know that the Assad regime is bad, but what concern is that to us when Turkey’s vital security interests are at stake?”

Not everyone is happy with this line of argumentation, however, or with Turkey’s current reticence in regard to Aleppo. Galip Dalay, a foreign policy analyst for the daily Karar, which is close to the AKP, believes Turkey’s policy of opposing Assad was correct and contends, “There is no evidence that shows that giving up on this policy will guarantee Turkey’s security interests.”

Dalay also questions the morality of Ankara’s current position on Aleppo, where, he says, “Russia is actively applying the Grozny model.” He added that the re-establishment of the “alliance with Russia” is why the Turkish media is barely discussing the “massacre and barbarity in Aleppo.”

Whether Ankara can ultimately rely on Moscow in containing the PYD remains a big question. Russia has allowed the group to open an office in Moscow and has not designated it a terrorist organization. It has said in the past that the Syrian Kurds must be represented at any peace talks.

Turkey and Russia also remain at odds over other issues, including the Crimea Peninsula. Turkish Foreign Ministry spokesman Tanju Bilgic expressed “regret” this week after Russia’s Supreme Court confirmed a lower court ruling declaring the Crimean Tatar parliament to be an extremist organization and banned its activities.

Bilgic said Turkey would continue to support the Tatars, a remark undoubtedly noted in Moscow with dissatisfaction. Bilgic’s relatively mild criticism of Moscow was nevertheless noteworthy and indicative of how far Ankara is prepared to go in criticizing Russia at the moment.