Turkey ups the ante in Syria

Turkey's shelling of YPG positions in Syria is not only fueling animosity between Ankara and Moscow, but is also causing fresh tensions with the United States. 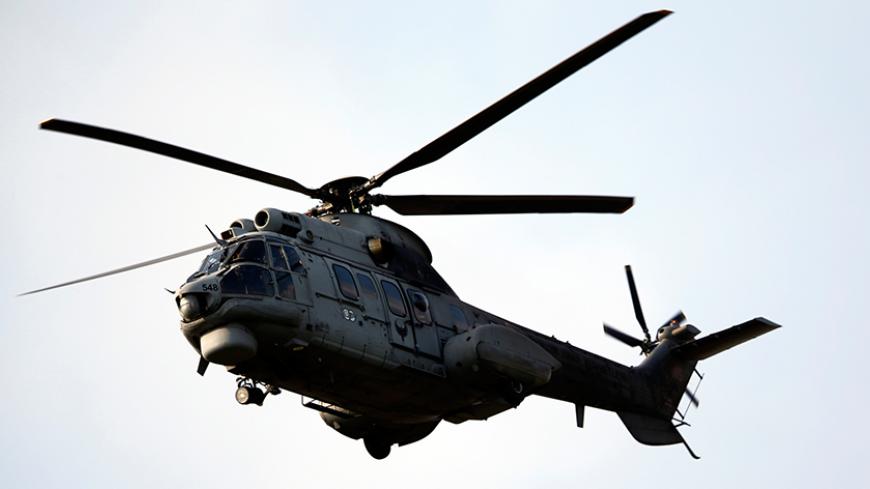 A Turkish air force helicopter takes off in the southern city of Adana, Turkey, July 27, 2015.

Turkey has raised the stakes in Syria by unleashing a campaign of heavy cross-border shelling against Russian-supported fighters from the People's Protection Units (YPG) that Ankara insists will continue despite international calls to desist. Ankara wants to prevent the Kurdish group, which it considers a terrorist organization allied with the Kurdistan Workers Party, from gaining more territory along Turkey’s border with Syria. In a separate development bound to further increase tensions, Turkey also shelled Syrian military positions across the border from Hatay province around the same time it unleashed its campaign against the YPG.

Turkish military sources told the daily Hurriyet that the shelling of Syrian army and YPG positions was in response to mortar attacks against Turkish territory. While this might be true with regard to the Syrian army, remarks by Prime Minister Ahmet Davutoglu indicate that Turkey has broader goals when it comes to the YPG.

A complication for Ankara, however, is that both the United States and Russia are supporting the YPG, albeit for different reasons. YPG fighters have advanced against the Islamic State (IS) east of the Euphrates River with US air support, while Russia has been using them against anti-Assad forces west of the Euphrates.

Meanwhile, animosity between Ankara and Moscow has been deepening since Turkey downed a Russian jet fighter Nov. 24. In addition, Washington is unhappy with the YPG’s Russian-supported advances, but nonetheless greeted Turkey’s military response against the group with disapproval.

Davutoglu told reporters Feb. 14 that he had laid Turkey’s demands on the line during a phone conversation with US Vice President Joe Biden earlier that day. To wit, the YPG is to stay clear of the town of Azaz, a stone’s throw from Turkey, and evacuate adjoining areas. It must also abandon attempts to sever the corridor between Aleppo and Turkey, which Ankara says it needs to provide support to refugees. Ankara also insists that the YPG evacuate the Menagh air base near Azaz, recently captured with Russian support, and has threatened to make the base inoperable by shelling it if the YPG does not abandon it.

Davutoglu said he also told Biden that the YPG does not represent Syrian Kurds. “Those who define this as a Turkish-Kurdish conflict only aim to lay the groundwork for a conflict among brothers in the Middle East,” he claimed.

The White House readout of Biden’s conversation with Davutoglu stated, “The Vice President noted US efforts to discourage Syrian Kurdish forces from exploiting current circumstances to seize additional territory near the Turkish border, and urged Turkey to show reciprocal restraint by ceasing artillery strikes in the area.” The reference to the “Syrian Kurds” and the attempt to address Turkey and the YPG equally have angered Ankara.

Foreign Ministry spokesman Tanju Bilgic said Feb. 15 that Ankara was “astonished” by US State Department spokesman John Kirby’s written response to Turkey’s shelling of YPG positions “in which Turkey and a terrorist group were placed on the same footing.” Bilgic said Ankara “strongly condemned this.” Adding to Ankara’s annoyance is that Europe's response to the shelling is echoing the US position.

Russia, on the other hand, is taking what appears to be a relatively low-key position for now, given the circumstances. “Moscow expresses its most serious concern about aggressive actions by Turkish authorities against a neighboring state,” read a Feb. 15 statement from the Russian Foreign Ministry. “Russia will support discussion of this issue in the UN Security Council for a clear assessment of the provocative line pursued by Ankara, which is creating a threat to peace and security in the Middle East and beyond.”

Moscow claims that Ankara is trying to help jihadis, who have been using the Aleppo corridor to enter Syria from Turkey. Davutoglu’s response was quick in coming. During a Feb. 15 visit to Ukraine, he shot back by remarking that Russian jets had struck a hospital in the Azaz region and accused Moscow of committing crimes against humanity.

“If Russia continues to act as a terrorist organization and forces civilians to leave their homes, then our response will be very resolute,” Davutoglu said. That he spoke while Ukrainian Prime Minister Arseniy Yatsenyuk visibly approved of his remarks is bound to have made blood boil in Moscow.

Retired Ambassador Ali Tuygan, who served as Turkish Foreign Ministry undersecretary during 2006-09, believes that Ankara's latest move is a continuation of mistakes made in Syria from the start. “It will be difficult to secure results in this way,” Tuygan told Al-Monitor. “It was also wrong to let relations with Russia deteriorate in this way,” noting that a major risk for Turkey is a confrontation with Russia over Syria.

“Ankara should work to de-escalate the tension with Russia, but we see Davutoglu doing the opposite in Kiev, of all places,” said Tuygan. He also commented that Turkey had worked hard for 25 years to bring ties with Russia to a positive and mutually beneficial level.

While in Kiev, Davutoglu also denied claims that Turkish troops had entered Syria. Most analysts agree that such a direct intervention is highly improbable given that Turkey would have to fight not just the YPG, but also Russian-backed regime forces, without support from NATO. This has not, however, stopped the pro-government Turkish media from trying to drum up support for direct intervention in Syria with scant consideration of the potential consequences.

The opposition, however, is warning that the government is steering Turkey toward disaster. Ozturk Yilmaz, deputy head of the main opposition Republican People's Party, underlined this position in a written statement after the shelling of YPG positions began. Yilmaz, an expert on the region, was Turkey’s consul general in Mosul when the city fell to IS in 2014. He was held hostage by the group for more than 100 days.

Yilmaz said that the ruling Justice and Development Party was still chasing its dream of leadership in the Middle East. He charged that the government’s lack of foresight “is doing irreparable harm to Turkey’s security interests and dragging Turkey step by step into the Syrian quagmire.”