After Syria intervention flop, what’s next for Erdogan?

Ankara’s latest statements show it has dropped the idea of sending regular troops to Syria, yet it is poised for new ventures to avoid a total exclusion from the Syrian equation. 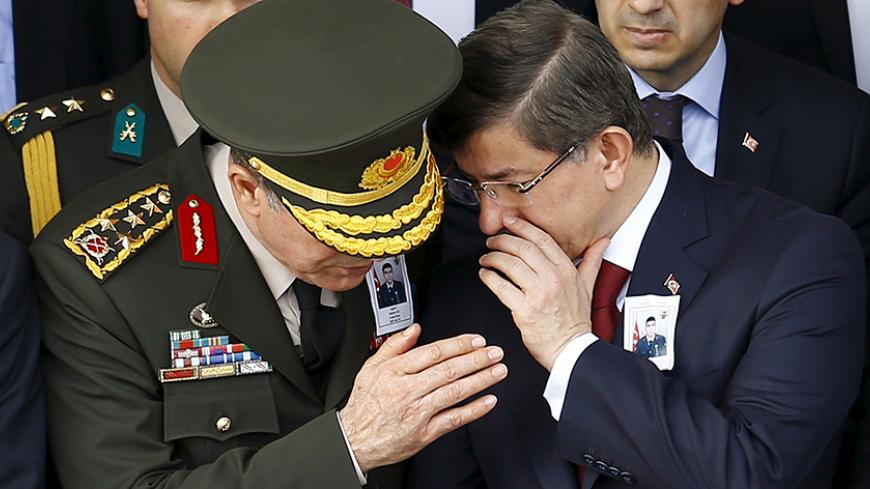 Prime Minister Ahmet Davutoglu (R) talks with Chief of Staff Gen. Hulusi Akar during a funeral ceremony for Army officer Seckin Cil in Ankara, Turkey, Feb. 18, 2016. Cil was killed during the clashes between Turkish security forces and Kurdish militants in the Sur district of the southeastern city of Diyarbakir. - REUTERS/Umit Bektas

In early February, the Russian-backed Syrian army cut the route from Aleppo to Turkey, a critical move that spurred President Recep Tayyip Erdogan’s desire for a Turkish military incursion in Syria. Ever since 2011, Erdogan and Prime Minister Ahmet Davutoglu have unsuccessfully tried all means except a military intervention to topple Syrian President Bashar al-Assad’s regime.

Yet toppling the regime was not the motive behind their latest advocacy of a military intervention. They knew this was already out of reach in September when Russia’s direct military involvement in Syria began. With the loss of the Aleppo route and the looming threat of a regime siege on the city, Erdogan’s objective shifted. He now sought to save Ankara from being totally sidelined from the Syrian equation and ensure it had some say on Syria’s future. Sending the Turkish army to Syria, he reckoned, was the only option left at hand to grab a prominent seat at the negotiating table.

However, Erdogan and Davutoglu failed to enlist any support from the United States, as they did each time they brought up the issue in the past. The Turkish military, too, signaled through the media it was not in favor of an intervention. Ankara, which has positioned itself as a “Sunni power” in the conflict, watched how its ally Saudi Arabia failed to impress the other actors in the crisis when it declared “readiness” to send ground troops to Syria, provided the US-led coalition against the Islamic State (IS) made “a decision to have a ground component.”

Ankara also reckoned that a unilateral Turkish incursion would generate a military response by Russia and spark a war between the two countries. According to reports, Moscow even warned Ankara it was prepared to use tactical nuclear weapons.

Two weeks after the first reports in early February of its intentions and preparations for an intervention, Ankara began to backtrack. The first statement came from Erdogan’s spokesman, Ibrahim Kalin. “We’ve never said Turkish soldiers should enter Syria, or that American or Saudi troops should do so in a ground operation, or that the country should be occupied. … We have been and remain committed to joint action with the international community,” he said in a live television interview Feb. 20. Kalin stressed Ankara had long advocated a no-fly zone, but conceded, “This has become difficult with the Russian involvement.”

Four days later, Davutoglu confirmed Ankara was not going to intervene, citing “Arab opposition” to Turkey. In an interview with Al Jazeera’s Arabic channel, he said, “Why did the Arab League condemn Turkey and urge it to pull out when Turkey went to Mosul to [help] liberate it and provide support? Who is going to guarantee that Arab countries will defend and support us if we intervene militarily in Syria?”

Ankara’s Syrian policy — basically an attempt to topple Assad and install Islamists to power in Damascus — collapsed a long time ago. The Ankara-backed jihadis and other radical Islamists keep losing ground against the Russian-backed Syrian army and the People’s Protection Units (YPG), the armed force of the Syrian Kurds. Now that the intervention idea is also dropped, what options could be left for Erdogan and Davutoglu to sustain their claim in Syria?

Davutoglu’s answer to one of Al Jazeera’s questions was quite telling in this regard. The question was put like this: “Your options are limited. Russia controls the skies over Syria. If you don’t want to confront Russia, your options are confined to short-range shelling across the border. Given that Russia supports the YPG as well, will you still do that?” Davutoglu replied with bravado, but his answer indicates Ankara does not have much at hand. “You say Russia controls the skies, but the hearts of the Syrian people are with us,” he said. “Even in the most recent attacks on Azaz, we retaliated for three days to YPG positions for breaching our engagement rules.”

Indeed, the shelling that lasted from Feb. 14 to Feb. 17 demonstrated that the Ankara regime’s real concern in Syria’s border region is neither IS nor Jabhat al-Nusra but the Kurdish YPG, which it labels a terrorist organization.

Due to the Russian threat, the Turkish air force has been unable to fly planes in Syrian air space. Now that a ground operation is also off the table, Ankara’s intervention capacity is limited to artillery fire with a range of 40 kilometers (25 miles), artillery rockets and its warplanes’ capability to strike from a distance.

Of course, the decision-makers in Ankara could be still assuming they hold a natural place in the Syrian equation for weakening the regime up until mid-2015, if not toppling it. This could be discerned in the answer Davutoglu gave to Al Jazeera’s interviewer when he asked him provocatively, “What is needed to happen so that Turkey and other countries intervene in support of the Syrian people?”

Here is how Davutoglu replied: “How have the Syrian people defended themselves if they lack Turkish support? Would have they been able to defend Aleppo otherwise? If a true Syrian moderate opposition exists today, this is thanks to Turkey. If the regime doesn’t control all of the country’s territory today, this is thanks to Turkey and some other states. If the Syrian people are still in Tell Rifat, Aleppo and Azaz, defending their lands, after last week’s heavy bombardment that Russia conducted there with 500 sorties and without targeting IS, this is thanks to our support. Our support will continue.”

But Davutoglu’s remarks constitute an open confession of how he and Erdogan have made Turkey a direct party to the Syrian war. If the Damascus regime has lost territory control because of Ankara’s role, Davutoglu’s words mean he assumes also the historic responsibility for the seizure of these territories by myriad jihadi and radical Islamist forces, including IS and Jabhat al-Nusra. If regime opponents have been able to defend themselves thanks to Turkey, as Davutoglu says, they could have done so only with weapons sent from Turkey. Hence, Davutoglu’s remarks constitute also an implicit acknowledgement of arms supplies to the rebels. And his pledge of continued support echoes like the continuation of arms supplies as well.

In sum, Ankara has given up the idea of intervention, but the position it maintains keeps the risk of a military confrontation with Russia alive.