How much support did Turkey provide to Syrian opposition?

The Turkish prime minister claimed that Turkey has done more than Arab countries to aid the Syrian rebels, though he stopped short of providing details about Turkey's "support." 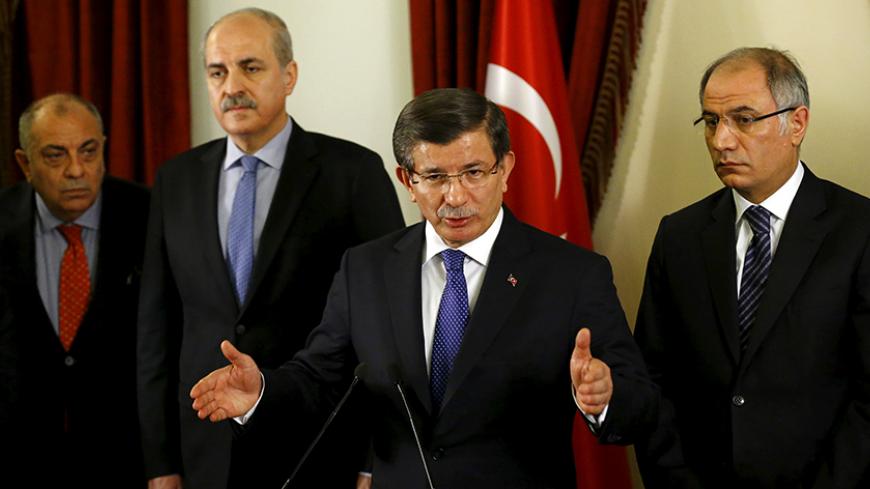 In an unusually candid interview with Al Jazeera Feb. 23, Prime Minister Ahmet Davutoglu admitted to aiding anti-Assad groups in Syria, claiming that Turkey had done more than most Arab countries in this respect.

Speaking a few days after Saudi Arabia’s Foreign Minister Adel al-Jubeir put to rest speculation that Turkey and his country were preparing for a ground operation in Syria, Davutoglu made several remarks that are bound to go down badly in Moscow and Tehran, suggesting that Ankara is betting on a defeat of the Syrian regime and its principal allies Russia and Iran, much like the defeat of the Soviet Union in Afghanistan. He also said Turkey would not actively intervene in Syria because it was not confident of support from Arab countries, citing the condemnation by the Arab League of the deployment of Turkish troops in Bashiqa near Mosul on Dec. 3.

Davutoglu’s remarks revealed that the Arab League’s reaction to the Bashiqa deployment, the complaint lodged at the UN Security Council by the Iraqi government and the lack of support from Arab countries for this deployment still rankle in Ankara.

Jubeir told Agence France-Presse on Feb. 18 that any special forces sent by Saudi Arabia to Syria would only fight the Islamic State, underlining that they would not get involved in unilateral operations against the Syrian regime unless an international coalition was established for this purpose. Jubeir’s remark deflated growing expectations in some quarters of the Islamist and pro-government Turkish media that Turkey and Saudi Arabia, with their own “coalition of the willing,” were preparing to intervene in Syria.

Davutoglu’s remarks followed reports in the Turkish press that Moscow was in touch with Saudi Arabia and Qatar, Turkey’s principal allies in Syria, prior to the Syrian cease-fire. These reports provided further evidence for anti-government quarters' concerns that Davutoglu’s policies have left Turkey isolated in the region.

He added, “How were they able to defend themselves if there was no Turkish support for the Syrian people? Could they be defending Aleppo or was it possible for them to survive? So if there is today a real Syrian moderate opposition, it is because of Turkish support. If today the regime is not able to control all the territories, this is because of Turkish and some other countries' support.”

Davutoglu’s remarks were taken as a confession of Ankara’s clandestine involvement in Syria’s civil war and condemned by opposition parties in Turkey.

“This is a confession that Turkey is involved in a proxy war and the threat against Syria’s territorial integrity, while working to secure the dominance of terrorist organizations there,” Oktay Vural, the spokesman for the Nationalist Movement Party, said in a statement reacting to Davutoglu’s remarks.

Riza Turmen, a former judge at the European Court of Human Rights who is currently a member of the main opposition Republican People's Party (CHP), said Davutoglu’s remarks reflected an intervention in Syria that violated international law, adding that the matter is under the jurisdiction of the International Court of Justice.

Bringing up the question of unilateral Turkish intervention in Syria himself during the interview, Davutoglu said he was asked about this by a very important Arab statesman. He said, “We sent military trainers and some troops to defend them in order to liberate Mosul. We sent them into Bashiqa, and the Arab League has condemned Turkey. Now those who are asking us questions, they have to look at themselves. Which Arab country did more — I am not criticizing all Arab friends — did more than Turkey?”

He added, “And why, when Turkey went to Mosul to liberate Mosul, to help Mosul, has the Arab League condemned Turkey and asked it to withdraw? Who will guarantee us, if we militarily intervene, that Arab countries will be defending and supporting this?”

Davutoglu knows, of course, that this was not the first time the Arab League has criticized Turkey for sending troops to an Arab country. It has condemned every ground operation by the Turkish armed forces against the Kurdistan Workers Party camps in northern Iraq, saying Ankara had violated the sovereign rights of an Arab country.

Al-Monitor asked Murat Ozcelik, a retired diplomat who was the government’s special envoy to Iraq in 2006 prior to becoming ambassador to Iraq in 2007, what lay behind Davutoglu’s apparent lack of confidence in Arab countries.

Ozcelik answered from another angle, saying that the lack of confidence in Turkey by Arab countries has a long history, one that Davutoglu had chosen to disregard in the past. He said, “In recent times, Davutoglu also misread the significance of Arab nationalism and viewed all of the Arab countries in the Middle East in the Islamic framework, assuming that they would fall behind an ascendant Turkey. That was a mistake and he is now trying to readjust the situation with such statements.”

Ozcelik, who is currently a CHP member, said there is also a perception among Arab regimes that Turkey aided radical Islamist groups in Syria, including IS, which they consider a threat.