Turkish Prime Minister Ahmet Davutoglu is trying to convince Washington that the real enemy is the Syrian regime, but appears to be failing to do so as the US-led coalition keeps its focus on the Islamic State. 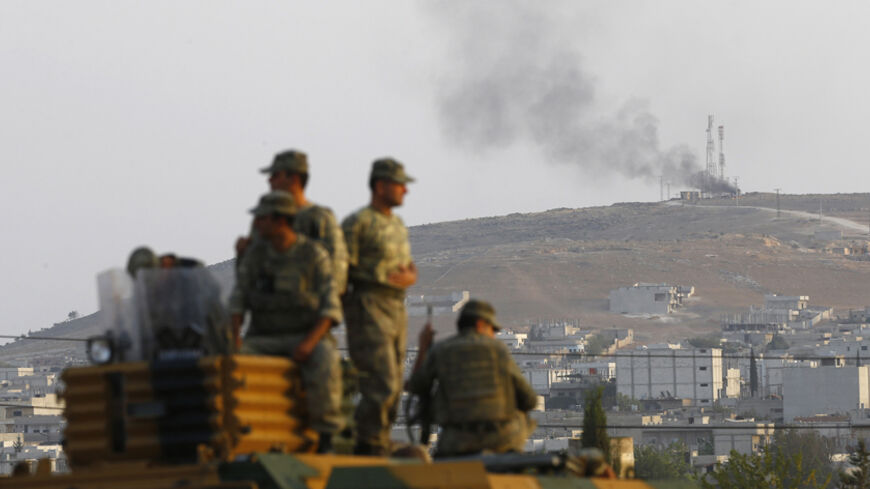 Turkish soldiers are seen on top of an armored vehicle with the Syrian town of Kobani in the background, near the Mursitpinar crossing on the Turkish-Syrian border, in the southeastern Turkish town of Suruc, Oct. 3, 2014. - REUTERS/Murad Sezer

Turkey’s active participation in the US-led coalition against the Islamic State (IS) is looking less and less likely, despite the parliament's Oct. 2 authorization to send troops to Iraq and Syria. That mandate was seen in the West as a prelude to Turkey’s decision to finally act against IS, but it is increasingly evident that Ankara’s priority remains taking out Syria’s President Bashar al-Assad.

This priority, however, is at odds with the mission of the anti-IS coalition as defined in the Jeddah Communique signed Sept. 11 by the Gulf Cooperation Council states, Egypt, Iraq, Jordan, Lebanon and the United States. The communique only mentions a resolve to destroy IS.

Turkey participated in the Jeddah conference but refused to sign the communique, arguing that IS was holding 49 Turks, including the Mosul consul general, hostage and it did not want to endanger their lives. After the hostages were freed, President Recep Tayyip Erdogan promised to contribute to the coalition against IS in every way possible, including militarily.

Prime Minister Ahmet Davutoglu has nevertheless made it clear now that this support is contingent on the Syrian regime being the principal target. “We are ready to do everything if there is a clear strategy that after [IS] we can be sure that our border will be protected. We don't want the regime on our border pushing people toward Turkey. We don't want other terrorist organizations to be active there,” Davutoglu told CNN’s Christiane Amanpour Oct 6.

When asked if degrading the Assad regime was one of Turkey’s conditions, Davutoglu also responded flatly, “Of course, because we believe that if Assad stays in Damascus with this brutal policy, if [IS] goes, another radical organization may come in.”

The second point ties in with Erdogan’s remarks Sept. 28, when he blasted the international community for moving against IS while refusing to do so against the PKK, which the United States, like Turkey, has designated a terrorist organization.

Davutoglu’s remarks also lend credence to claims in Turkey by the main opposition Republican People's Party (CHP) and the pro-Kurdish People's Democracy Party (HDP). Both maintain that IS is seen as the lesser evil by the Erdogan and the Davutoglu government compared with Assad and the PKK — even though the government is engaged in a peace process that also involves indirect talks with the PKK.

The CHP and the HDP voted against the government’s authorization motion, which allows the Turkish military to enter Iraq and Syria. They argued that its main target was not IS but the Syrian regime and Syrian Kurds.

Tellingly, Turkey appears to be doing little, if anything, to help the Syrian Kurds while IS gains control of the predominantly Kurdish city of Kobani, only a stone's throw away from the Turkish border. This inaction belies Davutoglu's remarks that Ankara will do everything to ensure Kobani does not fall to IS.

Erdogan and Davutoglu also want a no-fly zone and buffer zone on the Syrian side of the Turkish border for the estimated 1.5 million Syrian refugees in Turkey. Analysts, however, point out that IS has no aircraft and maintain that Ankara’s insistence on a no-fly zone has the Syrian regime in mind.

Despite its efforts, Ankara has failed so far to get the United States to accept the Syrian regime as the priority target in Syria and to get Washington’s support for a no-fly zone and buffer zone. Asked about Davutoglu’s remarks to CNN during her daily press briefing, US State Department spokeswoman Jen Psaki said Oct. 6, “Our position hasn’t changed. Our focus is on [IS].”

Turkey’s efforts appear doubly difficult since the Syrian regime has reportedly been mounting relatively successful airstrikes against IS. So why is Ankara maintaining a line that amounts to flogging a dead horse and could leave it isolated in the struggle against IS?

Zaman foreign policy commentator Abdulhamid Bilici, also the general director of the Cihan News Agency, which is covering events in Iraq and Syria firsthand, pointed out that unlike other countries, Turkey has faced serious problems as a result of the Syrian crisis these past three years.

Bilici told Al-Monitor that this is the reason why Ankara is trying to keep the focus on the Syrian regime even though the world’s attention has shifted to IS. “The Baathist regime continues to be the bigger problem for Ankara compared with IS. If this regime comes to be recognized by the world, this will pose even greater problems for Ankara,” Bilici said.

Brutal dictators are nothing new for the Middle East, of course, and the world has learned to live with them in the past. Given his proven staying power, it is not inconceivable that Assad could also come to be accepted in the end, even as he is internationally vilified as a bloody dictator. The strong backing he still gets from Russia and Iran also has to be factored in.

Soli Ozel, a lecturer on international politics at Istanbul’s Kadir Has University and a columnist for Haberturk who is frequently consulted by the Western media, also believes that Erdogan and Davutoglu fear that Assad, whom they continue to revile as a bloody dictator, may remain in power.

“Davutoglu is saying in effect that IS is the product of rage and if the source of that rage, namely the Syrian regime, goes, then such groups will also go. I don’t know if he believes this himself, though,” Ozel told Al-Monitor.

Ozel also wonders if there is an ulterior motive to Ankara’s insistence on a no-fly zone and buffer zone in Syria even though there is no international support for them. “If IS engages in a massacre in northern Syria this will provide an excuse for Ankara doing little to prevent it. It can say, 'I warned the international community, but it refused to act.'"

Nihat Ali Ozcan, a security expert at the Ankara-based Economic Policy Research Foundation of Turkey and a columnist for Milliyet, believes the real problem for the Turkish military in Syria is that it cannot decide who the enemy is. “If the target is Assad, the answer to this question is simple,” Ozcan argued in his Oct. 7 column. “Otherwise it is not clear who and where the enemy is. It wears no uniform and is a part of the civilian population.”

Meanwhile, Wolfango Piccoli, an expert on Turkey for the New York-based global advisory firm Teneo, pointed out that Ankara may be angry over accusations that it has been soft on IS, and there are factors that bolster this claim.

“In a country in which access to tens of thousands of websites has been blocked, Turkish-language pro-[IS] websites such as Takva Haber continue to glorify the group and encourage young Turks to join it, without any restriction,” Piccoli pointed out in an assessment provided to Al-Monitor.

The bottom line is that the situation in Syria keeps getting worse for Ankara as it tries to impose its own priorities on a coalition that appears to have very different ideas.