Analysts predict Ankara will continue to refuse active involvement against the Islamic State and retain its current policy until Washington spells out its plans for Syria’s future. 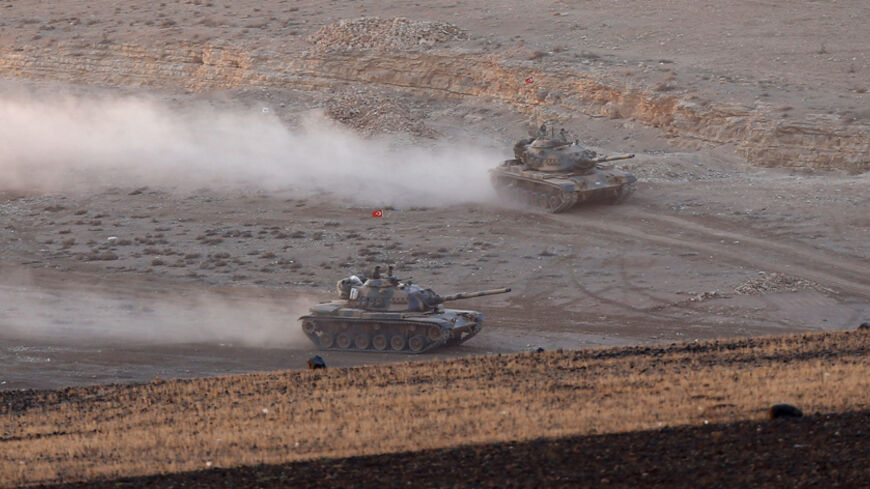 Turkish army tanks maneuver near Turkish Kurds (not pictured) watching the Syrian town of Kobani from atop a hill near the Mursitpinar border crossing, Nov. 18, 2014. - REUTERS/Osman Orsal

Turkey remains in a difficult situation in the US-led fight against the Islamic State (IS). Ankara’s efforts to keep the focus on regime change in Damascus gained little traction at the 60-nation meeting in Brussels on Dec. 3 called by US Secretary of State John Kerry to assess progress in “degrading and destroying” IS.

Meanwhile, Turkey’s reluctance to get involved militarily in the fight against IS continues to fuel doubts about its commitment to the anti-IS coalition. Allegations that Ankara remains soft on IS — if not aiding it covertly — also continue to hound the government of Prime Minister Ahmet Davutoglu.

These allegations resurfaced after the deadly suicide attack in the northern Syrian town of Kobani on Nov. 29. Reuters reported that four IS militants blew themselves up in Kobani, one detonating a car bomb at the Mursitpinar border crossing with Turkey. It cited the Britain-based Syrian Observatory for Human Rights, as well as a Kurdish official, alleging that the vehicle used in the bombing had come from Turkey.

In a related development, Turkey's pro-Kurdish People's Democracy Party (HDP) has contended that IS militants are using Turkish public grain depots in an area patrolled by Turkish security forces as a base from which to attack Kobani.

The government strongly denies these allegations but appears unable to overcome the stigma that has attached itself to Turkey in this respect. Turkish analysts contacted by Al-Monitor believe the perception that IS gets assistance from Turkey is being used to pressure Ankara into direct action against this group.

But these analysts do not expect Turkey to change its Syria policy, even though the international community’s focus remains on IS rather than Bashar ​al-Assad and his regime.

The official statement issued after the Brussels meeting, which was also attended by Turkish Foreign Minister Mevlut Cavusoglu, said the coalition partners had reaffirmed their commitment to work together under a common, multifaceted and long-term strategy to degrade and defeat IS.

This indicates that combating IS will remain the long-term priority, which is clearly not what Ankara wants to hear. President Recep Tayyip Erdogan’s determination to see Syrian President Assad toppled remains strong, while Davutoglu retains his belief that getting rid of Assad is the necessary first step to defeating IS.

Cavusoglu told reporters at the end of the Brussels meeting that the United States and other members of the coalition were beginning to understand why Turkey wants a no-fly zone and a safe haven in Syria. Ankara’s demand for a no-fly zone and safe haven mainly targets the Syrian regime, so Cavusoglu’s remarks can be interpreted as suggesting that Washington, and others, are coming around to Turkey’s position in Syria.

“When proposals about a no-fly zone or a safe haven came up first, everyone had a different view on the matter. Some didn’t even understand what it meant. But as we continued to explain why this was important, we have allies, starting with the US, who have begun to understand why this is important,” Cavusoglu said.

Washington’s take on the topic, however, is a little different. During his news conference after the Brussels meeting, Kerry said, “The United States remains extremely engaged in its discussions with Turkey,” but added, “It is premature to suggest at this moment of time that we are close to making a decision or moving forward with any form of a safe zone or a buffer zone.”

Indicating that Washington continues to believe that Assad has lost all legitimacy, Kerry nevertheless pointed out that the United States is “looking still for the way to engage all of the countries in the region in an effort to achieve what was originally laid out in Geneva. That remains the operative objective.”

Turkey pays lip service to the Geneva process, which was initiated by Washington and Moscow for a negotiated settlement to the Syria crisis, but continues to oppose Russian plans to make the Assad regime a party to those talks.

Despite Cavusoglu’s assessment, the picture to emerge from Brussels does not point to a shift in the foreseeable future by the anti-IS coalition toward Turkey’s position. Ankara, however, does not appear willing to revise its Syria policy, either.

Akgun told Al-Monitor that a Geneva-type process, whereby the Syrian regime is part of the talks but not Assad himself, may provide a way out of its dilemma for Ankara.

Pointing out that this does not appear likely at this stage, Akgun said that Ankara in this case will wait instead for Washington to clarify its position on Syria’s future.

“Turkey will maintain its current policy on Syria until Washington spells clearly what its future plans are for that country, which it is not doing at the present time,” Akgun said.

Ankara is concerned that Washington may in time come around to accepting that Assad, having proved his ability to remain standing, stays in power despite assurances by Kerry that he has lost legitimacy.

Akgun also argued that Ankara’s current Syria policy is also providing a means for it to refrain from active military engagement against IS. “The government does not want to enter this war because it knows it will be very messy for Turkey,” he said.

Unlike Akgun, Ufuk Ulutas, the director for foreign policy at the Foundation for Political, Economic and Social Research (SETA), does not see a need for Ankara to revise its Syria policy. Ulutas told Al-Monitor that Ankara’s policy of not getting actively involved in the military operations of the anti-IS coalition is also a correct one.

“There is also no need for Turkey to change its current position because the US-led operation is clearly unsuccessful. The recent suicide bombings in Kobani show this. The coalition is pursuing a misguided strategy and there is no reason why Turkey should be part of this,” Ulutas said.

“Unlike others, Turkey has to consider the broader implications of getting directly involved against IS such as security concerns, as well as the fact that these countries will continue to be its neighbors in the future. So it has to act very carefully,” Ulutas said.

Akgun, who was at the border region near Kobani last week for his Haberturk television program, also expressed doubts about allegations that IS is getting support from Turkey. “These allegations are clearly being used to pressure the government to act. They surfaced again after the recent car bomb, but having seen the region it is hard to believe there is a state policy to assist IS,” Akgun said.

He maintained that it would be very difficult to keep such a policy secret, underlining that, apart from the overbearing Turkish military presence near the conflict zone in Syria, the region was under constant surveillance by the US military, not to mention the presence of a large number of reporters from the international media.

“It is also hard to believe that IS uses Turkish silos without being spotted, or that everyone in the Turkish military is turning a blind eye to this group, even though some might be doing so. At any rate, these allegations do not come from foreign governments but from the media and nongovernmental groups,” Akgun said.

Whatever the truth may be, Syria continues to be a “messy” affair for Ankara, even if it is not prepared to revise its policies.