Will Turkey’s rules of engagement against Syrian planes now apply to Russian planes flying near the Turkish border? 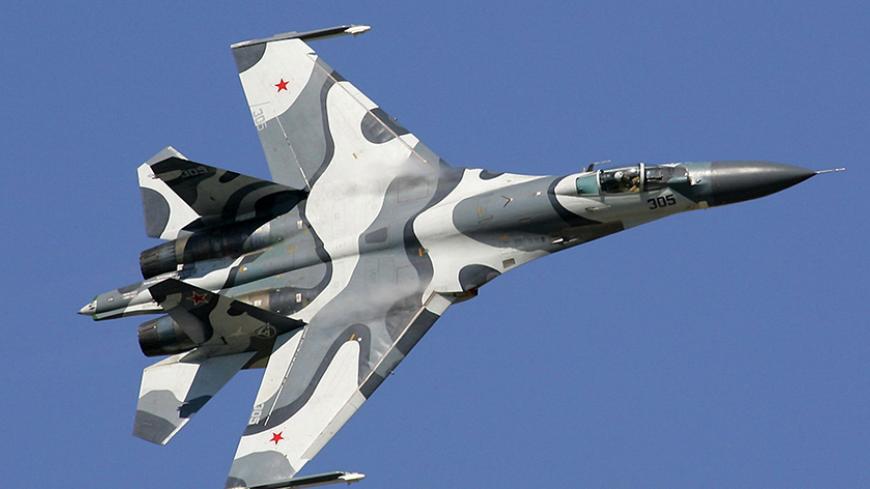 Turkey's July decision to finally open its air bases near Syria and Iraq, including Incirlik, to the US-led coalition fighting the Islamic State was a game changer for the region. It meant the coalition’s air raids against IS would become more effective and less costly.

Only days after the first detachment of six American F-16s was deployed to Incirlik in early August, the media reported the deployment of six Russian MiG-31 Foxhound interceptor fighter jets to the Mezze air base near Damascus. Russia’s military presence in Syria continued to grow thereafter, with the number of Russian warplanes said to have reached 28, including long-range Su-27 Flanker interceptor fighter jets.

The Russian military buildup, backed with air-to-ground assault aircraft, attack helicopters, drones, air defense systems, ground assets and a large number of military personnel, is said to have two aims: fighting IS and preventing the collapse of President Bashar al-Assad’s regime. In this sense, the impact of the Russian intervention is much stronger. By dramatically boosting its force and weight in the Syrian equation, Russia has turned upside down the game plans of others, chief among them Turkey’s ruling Justice and Development Party (AKP).

Using some imagination, one could foresee the adverse impacts Russia’s move will have on Ankara’s policies on the ground. Ankara is now likely to be forced to end the de facto situation — virtually a no-fly zone — it has enforced casually in border areas since 2012. In June 2012, after a Turkish reconnaissance plane was shot down by an air defense system in Syria, Ankara announced new rules of engagement, including the interception of Syrian aircraft flying close to Turkish airspace. There has been no indication so far that these rules of engagement have changed. Since the summer of 2012, Turkish media have occasionally reported incidents of Turkish fighter jets taking off from their bases to chase off Syrian planes and helicopters flying “too close” to the border.

Ankara-backed Islamist groups fighting Assad’s regime have emerged as the main beneficiary of these rules of engagement, which have effectively served as a Turkish air cover for their military and logistical operations in border regions.

Now, the following question arises: Will Ankara stick to its rules of engagement if airplanes approaching the border have the Russian star on their wings? My guess is that the rules of engagement will not be enforced against Russian aircraft, thus ending the de facto air cover for the rebels.

Similarly, Ankara’s intention to create a safe zone along the border stretch from Jarablus to Azaz inside Syria has become completely meaningless since the Russian intervention. Preventing Syrian aircraft from flying over the designated area is the first prerequisite for such a zone, which naturally requires the use of an air force. Thus, Russia’s deployment of interceptor fighter jets in Syria can be explained only with one objective: to deter Ankara as an initial step. Another explanation is hardly possible, given that jihadi groups such as IS, Jabhat al-Nusra and Ahrar al-Sham do not have an air force.

Turkish President Recep Tayyip Erdogan’s problem stems from his priorities, which are different from those of the coalition. Turkey may have opened its air bases to make coalition airstrikes on IS more efficient and less costly, but this doesn’t mean that fighting IS has become a top priority for Erdogan and his prime minister, Ahmet Davutoglu. IS is not and has never been a priority for the pair — this we have known for ages. Erdogan, for instance, waited until Sept. 25, 2014, to finally brand IS a terrorist group.

For the Erdogan-Davutoglu pair, the use of Turkish air bases against IS had been preconditioned on the simultaneous pursuit of a regime change in Syria, which, in turn, entailed the creation and enforcement of the safe zone they had advocated since 2012. So, what happened that they finally acquiesced to the air base deal in July after months of stubborn foot-dragging?

The decision was driven by three reasons, none of which places the IS threat in the foreground.

First, forces of the Kurdish Democratic Union Party (PYD), advancing under coalition air cover, captured the border town of Tell Abyad from IS in June. The Erdogan-Davutoglu duo was alarmed that the more it deferred cooperation with the anti-IS coalition the more ground slid from under its feet, while the PYD, the sister organization of Turkey’s Kurdistan Workers Party (PKK), grew stronger by the day, allied with the coalition.

Turkey is opposed to the idea of the PYD advancing from Kobani to the western bank of the Euphrates to help oust IS from Jarablus. This has been another factor in Ankara’s decision to open the bases. Yet, only time will tell whether Ankara can keep the PYD in Kobani, given that the United States aims to cut all ground links between IS and Turkey, something that the Turkish government forces have failed to deliver.

Second, the supply route from the Turkish border town of Kilis to Aleppo — a vital element in sustaining Ankara’s regime-change policy — came under IS threat in June. The area stretching from the Bab al-Salam border crossing down to Aleppo is controlled by rebel groups officially backed by Ankara. The AKP government needs to preserve this access to Aleppo, without which its ambitions in Syria become completely irrelevant. Thus, allowing the coalition to use Turkish air bases became imperative in light of stopping the IS advance on the eastern side of the route.

Third, the PYD — which has the PKK as its main supplier and supporter — emerged as the United States’ only reliable ally fighting IS in Syria. Driven by domestic political considerations, Ankara resumed its war on the PKK, weakening the sole US ally on the ground. Keeping the bases closed to coalition aircraft in these circumstances would have been a very unwise idea. In other words, the bases were granted as a sort of “hush money” to the US-led coalition. Washington says it has not sanctioned Ankara’s onslaught on the PKK, denying any explicit or implicit “bases-for-PKK” deal. Yet, Ankara’s logic in this equation functions independently from the categorical US attitude.

The United States is quite content with Ankara’s decision to open the bases. Turkey is said to have engaged in more serious cooperation against IS since the spring. Also, US support for the PYD is said to be limited to the fight against IS, not involving the supply of weapons and ammunition.

Stopping IS remains the No. 1 US priority. Had Turkey shared the coalition’s objective to degrade and defeat IS as a top priority, it would not have been affected that much by Russia stepping in against IS and on Damascus’ side. For the Erdogan-Davutoglu pair, IS represents a growing threat due to the reasons mentioned above, but is never a top priority.

Turkey’s No. 1 problem and priority today is the PKK, which it has been fighting since the two-year cease-fire came to an end in July. Yet, for the United States, the PKK’s Syrian extension, the PYD, is not part of the problem but part of the solution. Overthrowing Assad has ceased to be a US priority since IS emerged as a threat on a regional scale.

With Russia’s military moves balancing the gains that other jihadi groups made in Idlib in the north and Daraa in the south earlier this year, Ankara’s priority of toppling Assad has grown even more irrelevant. Ultimately, the Russian move means Ankara will have to settle for much less than it had hoped for by letting the anti-IS coalition use its air bases.