Are the US, Russia staking out territorial clout in Syria?

Moscow and Washington both deny they are dividing Syria into "zones of influence," but they might be laying the groundwork by creating military facilities at various sites. 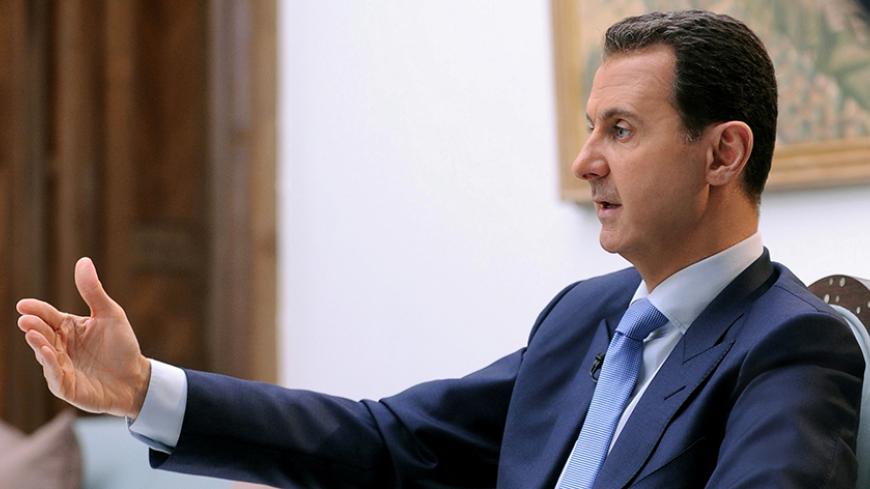 On April 22, the Russian Federation Council — the upper chamber of the Russian parliament — stated that Moscow could supply Damascus with air defense systems “on a priority basis.” However, no specifics were provided. A day before the statement was issued, Syrian President Bashar al-Assad noted that Syria and Russia were holding talks on new arms deliveries, including air defense systems.

As early as April 7 (shortly after the US airstrike on Syria’s Shayrat air base in retaliation for Syria’s alleged use of chemical weapons on its own people), Russian Defense Ministry spokesman Maj. Gen. Igor Konashenkov told the media that Russia would soon help strengthen Syria’s defense systems to shield the infrastructure.

If approached critically, the statements can be taken with a grain of salt. Bolstering Syria’s air defense doesn’t benefit Russia. Rather, Russia should use the threat of US airstrikes to pressure Damascus and Tehran to work toward a political solution and should also take advantage of Syria’s dispersed aircraft to control the Syrian air force. At the same time, Russia's military and pundits refuse to recognize that Tehran, by becoming involved in the battles for Wadi Barada and East Ghouta, derailed the struggling negotiations in Astana, Kazakhstan, under the far-fetched pretext that it was fighting Jabhat Fatah al-Sham in places where the group doesn’t even operate or has very few soldiers. That action provoked moderate opposition groups to join jihadi group Hayat Tahrir al-Sham, so that Syria's pro-government forces would release their grip on opposition enclaves outside Damascus.

However, it is hard to say what lessons the Kremlin has drawn from the results of Tehran’s actions. In a bid to impose "equal-footing dialogue" on Washington, Moscow has repeatedly changed its stance on Syria regarding both Russia’s military presence and the Syrian opposition. In October, Russian journalists reported on a possible dispatch to Syria of a Pantsir-S1, a short-range air-defense system designed to protect strategic military and civil targets. Under the pretext of the potential for American strikes, Moscow may expand its previously "behind-the-scenes" steps to strengthen the military infrastructure.

Any information about additional troops or the military’s use of Syria’s infrastructure is labeled media hype. Russian and American commanders prefer not to disclose details about their “boots on the ground,” and they deny any rumors or reports. In 2015, in his comments on the deployment of a Russian task force at Shayrat, Konashenkov emphasized "the absence of any operational need to establish additional military bases in Syria, whatever ‘couch strategists’ predicted.” Yet satellite imagery has repeatedly confirmed Russia is using Shayrat as a stage airfield.

Russia’s military presence in Syria goes beyond Khmeimim air base and Tartus naval base. Despite the international media’s and experts’ current keen interest in Khmeimim air base at Latakia, the country’s deployment of Iskander-M short-range ballistic missiles there remains uncorroborated. However, there have been sightings of Iskander transporter erector launcher vehicles.

While some Russian experts are quick to highlight the sub-strategic and deterrent role of the missiles, especially given Turkey’s unpredictability, others are disposed to link the Iskander with a new modified combat support vehicle known by the Russian acronym MOBD. Although July 2016 commercial photos of the air base revealed two Iskander-M launch and transport vehicles at the site, the evidence is inexplicably overlooked.

Moreover, Russia’s activity at the Kuweires air base in Aleppo, recaptured by Syria's army in November 2015 and fully reopened in March 2017, stays under the radar. In early January 2016, rumors about increased Russian military presence at the airport and deployment of air defense forces started to circulate. Those reports were substantiated in July 2016. When comparing satellite pictures of different years, analysts saw both the prepared ground for installing S-200 launchers and their deployment in the northwestern part of the airport.

Russian specialists undoubtedly had rendered assistance, since the sophisticated systems were deployed in Homs and south of Damascus decades ago, back in Soviet times. Moreover, they cannot be redeployed elsewhere, given their concrete bases and the length of some cables, exceeding a kilometer. The Pantsir-S1 air defense systems were also detected at the site. However, it still remains a mystery whether MiG-31 supersonic interceptor aircraft, able to fire long-range missiles, were deployed at the Kuweires base to patrol the area. An Al-Monitor source indicated that photos of the fighters were actually taken at the Kuweires base rather than at Khmeimim, and their redeployment was needed to improve the Russian air defense system.

The presence of Russian artillery units, special operations forces, military police and fighters from the private Wagner military group in other provinces does not imply that they are constantly based in an area. Russian military experts engage in combat for tactical purposes, and in most cases they train recruits and retrain the soldiers of the fifth corps of the Syrian army. They also deliver humanitarian aid and negotiate with the opposition. Al-Monitor has been informed that since the conflict between the pro-government Syrian forces and the Kurds erupted in August 2016, the Russian military has been acting as peacekeepers. Since then, Moscow has maintained a reconnaissance mission in Qamishli.

The Russian Aerospace Defense Forces and their effectiveness are extensively covered in the media, but helicopter activity at Kuweires, Shayrat and Tiyas air bases remains obscure. The tasks carried out by helicopter units include protection of the Khmeimim military base and support of Russian troops and Syrian pro-government forces as they combat Islamic State (IS) militants.

To complete the operation to retake the IS stronghold of Raqqa, the United States is building up its military presence and developing new airfields in Syria. It remains to be seen how many airfields will be built and how long they will remain, but the view in Russia is that after the provinces of Raqqa and Deir ez-Zor are liberated by the Syrian Democratic Forces (SDF) coalition, the United States will be reluctant to abandon its military infrastructure in Syrian Kurdistan. In fact, that infrastructure would enable Americans to remain in the heart of the region and to annoy Erdogan by responding symmetrically to his threats of restricting US use of Incirlik Air Base.

Formally, the US military states that it uses the facilities in northern Syria only to deliver and handle the cargo dispatched to its anti-IS allies. However, at least two tactical missiles are known to have been launched against IS units with the high mobility artillery rocket system deployed in Kobani. The United States has two facilities in this area. One is on the territory of the former Lafarge plant, where AH-64 Apache, Black Hawk and CH-47 helicopters have been detected, and a new one with a landing strip is being constructed about 20 miles south of Kobani. Apart from Manbij, where US military forces halted the advance of the pro-Turkish Free Syrian Army in late February, Americans and their NATO allies use Ayn Issa facilities to train SDF fighters, as well as the Abu Hajar airport in the Rmelan area. US engineers are rebuilding the Taqba air base freed from IS in late March, transforming it into the Qayyarah-2, a logistics center similar to the Qayyarah base in Iraq.

Although the external players, in particular the United States and Russia, officially deny Syria is being divided into de facto zones of influence, the separate use of the military facilities testifies to the opposite. However, if the parties manage to channel the conflict onto a political track, Russian and US troops may act as guarantors of the Syrian-style Dayton Agreement.