Strikes on Syria look more like practice than punishment

Moscow and Washington are putting the best possible spin on the results of airstrikes on Syria, each seeking to be seen as the victor. 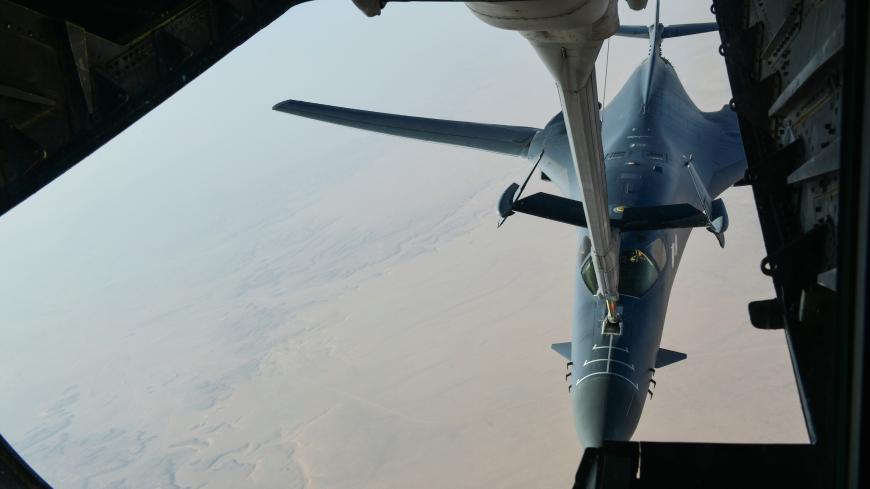 A US Air Force B-1B Lancer bomber, being deployed to launch strikes as part of the multinational response to Syria's use of chemical weapons, is refueled by a KC-135 tanker aircraft over an undisclosed location, April 14, 2018. - REUTERS/US Air Force

The Syrian conflict is proof that in modern warfare, the perception of victory is sometimes more important than actual victory. The April 14 US-led strikes on Syria and subsequent challenges of their supposed effectiveness by Moscow and Damascus are aimed at helping both parties save face.

The attack came in retaliation for Syria’s alleged use of chemical weapons. The way the offensive was managed creates the impression that the event was staged, and it’s certainly not clear whether Russia and the United States succeeded in establishing a deterrence factor for the future.

Shortly after the strikes, the Syrian and Russian militaries claimed that, somehow, their Soviet-era air defense systems efficiently intercepted the “nice and new and smart” missiles US President Donald Trump spoke of. The old systems were so effective, they apparently even intercepted US missiles over areas the Pentagon says weren’t targeted.

After the strikes, Russian Gen. Sergei Rudskoy, chief of the main operational directorate of the general staff, held a briefing claiming that out of 103 cruise missiles launched on Syria, 71 had been intercepted. According to Rudskoy, the S-125, S-200, Buk, Kvadrat and Osa Syrian air defense systems — produced more than 40 years ago — helped repel the attack. Russia’s Defense Ministry claimed the United States and its allies had targeted as many as seven military airfields, in addition to the facilities thought to be related to Syria’s alleged military chemical program.

Many Russian military experts immediately questioned the efficiency of Soviet-era air defense systems in taking down US and allied strikes. At an April 16 Defense Ministry briefing, spokesperson Maj. Gen. Igor Konashenkov made a slight yet important amendment to Moscow’s previous statements by acknowledging the use of the Russian-made Pantsir-S1 air defense system supplied to Syria some time ago and designed specifically to intercept cruise missiles and low-flying air targets, including drones. According to Konashenkov, it took 112 air defense missiles to repel the US-led strikes. The S-200 demonstrated the lowest efficiency rate, having fired eight missiles and hitting no targets since the system is primarily designed to hit aircraft.

As an example of the S-200’s efficiency when doing the job it’s made for, Konashenkov alluded to the Feb. 10 downing of an Israeli F-16. “This system shot down a fighter [jet] of a neighboring country. The aircraft took efforts to intrude on the airspace of the Syrian Arab Republic.”

The official Russian and Syrian narratives leave questions. First, there’s no photo or video proof of such a great number of intercepted missiles. As seen in footage, those military airfields that had allegedly been targeted but successfully defended may, in fact, have never been targeted in the first place. Second, the Syrian Defense Ministry’s photo allegedly showing debris from fired missiles provides little proof of anything since it’s hard to distinguish between debris from a cruise missile that hit a target and one that missed.

The US claim of 76 missiles looks strange, and Russia’s claim is hard to verify. Such conflicting information is nothing new in battle.

The Pentagon and Trump himself denied that even a single US or ally missile had been downed by either Syrian or Russian air defenses. Lt. Gen. Kenneth McKenzie, director of the Joint Chiefs of Staff at the Pentagon, said the Syrians “launched surface-to-air missiles on a ballistic trajectory” and “most of the launches occurred after our strike was over.” Washington thus implied Damascus was basically just shooting into the air merely to support subsequent propaganda saying it had repelled American attacks.

The day after the attacks, chief Pentagon spokesperson Dana White accused Russia of launching a “disinformation campaign,” adding, “There has been a 2,000% increase in [the activity of] Russian trolls in the last 24 hours.”

The question in the US narrative, though, is about the number of missiles used to strike just one of the three stated targets — buildings of the now totally destroyed Barzah Research and Development Center in Damascus, which the United States claimed were used for chemical weapons research, development and production. Theoretically, the 76 cruise missiles the US military said it launched were supposed to overwhelm Syrian air defenses. The United States thus might have been preparing for a certain portion of its missiles to be thwarted; otherwise, the task would have taken no more than six missiles. Yet the official American narrative is that no missiles were intercepted. That means there should be shell craters around the site, and none are visible in pictures from the area. The number 76 is a comfortable figure to disguise how many missiles might have jammed or been intercepted. In April 2017, when the Russian Defense Ministry stated that only 23 American missiles had reached the Shayrat air base, satellite images helped disprove the claim since the images showed 44 craters with some targets having been hit twice.

So the US claim of 76 missiles looks strange, and Russia’s claim is hard to verify. Such conflicting information is nothing new in battle.

Yet in the US-led strikes on Syria, there are some important elements that deserve special attention. Practically all media reported that Syria moved its aircraft to cover and evacuated all regional staff. Kommersant newspaper reported the Russian military had been preparing for the US-led missile strikes for more than a week. During this time, there were both back-channel talks about the precise targets the Western coalition was eyeing for itself and coordination with Syrian forces that had been trained to counter the attack.

And as flawed as they might be, the old Soviet air defenses — whose combat capability had been reinforced by Russian specialists from day one of the Russian campaign in Syria in 2015 — aren't entirely useless. They have proved their efficiency in taking out cruise missiles in the past — for example, in Yugoslavia. In Syria, the defending party appears to have known the targets and an approximate time of the strikes and had been receiving information from Russian on-the-ground radio detectors and airborne early-warning and control systems.

This makes the strikes and interceptions look like military drills, with a fair degree of improvisation between the parties in some kind of tacit agreement. In this regard, even the reports last week of an alleged cat-and-mouse game between Russian and British subs — which read like a spy thriller — need to be taken with a grain of salt. That said, the United States and allies have exercised military coordination and shown they can destroy different targets from different launchers with different types of missiles. Some of the missiles have indeed been “new” — tested in combat for the first time — such as the French cruise missiles MdCN and American missiles AGM-158B JASSM-ER. Whether all this will serve as a deterrent for Russian and Syrian actions — or increase their appetites for a regional arms race — remains to be seen.