After four years of fighting in Syria, Russia expands military facilities, but the nature of looming challenges is political. 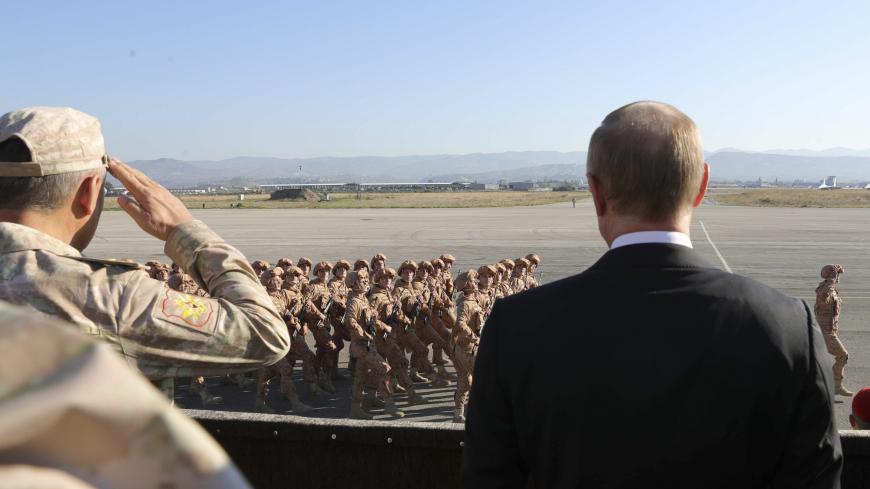 In the run-up to the fourth anniversary of the launch of Russia’s military campaign in Syria, the Russian military announced Moscow is eyeing expansion and reconstruction of the Khmeimim​ air base in Syria's Latakia province. The initiative, at the initial stage, involves the rebuilding of the second runway to allow the facility to service more aircraft.

Lt. Col. Konstantin Dolgov, deputy commander of the mixed air regiment deployed in Khmeimim, pointed out that the facility is already capable of hosting missile carriers. Earlier, the strategic airplanes of Russian Aerospace Forces (Tu-95MS and Tu-160) launched their cruise missile attacks on the positions of the opposition groups and Islamic State terrorists from Mozdok and Olenya air bases in Russia, sometimes having to refuel in flight.

Moreover, the Russians constructed new aircraft hangars, able to shelter the Su-35 fighter jets and Su-34 bombers from occasional drone strikes. The spokesman for the Defense Ministry, Maj. Gen. Igor Konashenkov, told journalists that in the last two years, about 120 rebels who tried to assault the air base have been killed by the air defense systems and electronic countermeasure devices.

Dolgov added that the shelter hangars are equipped with a centralized system of fuel and lubricant provisions. As a result, the timelines of preparation for consecutive flights decreased significantly.

The base, according to the official, hosts about 30 aircraft, including airplanes (Su-35S, Su-34 and Su-24) and military helicopters (Mi-35 and Mi-8), roughly the same amount as in 2015, at the beginning of the campaign.

The military officials reported on the improvement of another facility in Syria. On Sept. 26, the deputy head of Russian operational command for distant maritime zones, Evgeny Guschin, announced that a Russian navy-based shipyard was constructed in the port of Tartus. The factory, supposed to open Oct. 15, covers an area of 2,100 square meters. The same day, the head of command, Sergey Tronev, said that the port hosts two submarines equipped by Kalibr missiles.

It is noteworthy that the official reports emphasize the status of facilities in Tartus. After the port’s waterway was deepened and widened with necessary legal approval, the facility, previously a minor technical maintenance point, became a full-fledged Mediterranean foothold of the Russian navy, able to host up to 11 warships, including ones equipped with nuclear power generators.

Interestingly, the military spreads this information more as a matter of fact than as breaking news. During the entire four years of the Russian air force's presence in Latakia, the Defense Ministry has continuously expanded Khmeimim’s capability, even while certain politicians in Moscow viewed the constant presence as nonviable. In July 2016, the satellite images of the air base made in late 2015 were compared with ones made in June 2016, revealing a new aircraft parking lot, expanded helipads and a lengthened runway.

Russia’s four-year record in Syria is remarkable, but nuances should not be overlooked.

First, the commanders are reluctant to admit their mistakes. They reject criticism of any kind, even if it's constructive. For instance, trying to justify its obvious failures leading to the surrender of Palmyra in December 2016, the ministry was rapidly increasing the alleged number of Islamic State troops targeting the city. On Dec. 11 the reported number of terrorists assaulting Palmyra totaled up to 4,000. The next day the military officials said it was, in fact, 5,000 militants. Meanwhile, even pro-government Russian and Syrian reporters mentioned significantly smaller numbers, up to 1,500 combatants.

A source in the Russian military industry told Al-Monitor, speaking not for attribution, that Kalibr cruise missiles had been missing their targets often, in spite of their improved accuracy during launches from marine and air platforms. According to the source, Russia, suffering from limited capability to provide supplies to remote battlefields, tried to compensate by every means acceptable, including KIL-158 lifting-and-mooring ships, dry cargo ships and other vessels previously utilized by Turkish and Ukrainian ship owners (such as Turkish Smyrna, Dadali, Alican and Deval) and purchased for the so-called marine express under the Russian navy’s patronage.

Discussing the results of its four years of operations, the Russians emphasize that the Syrian campaign allowed for the gaining of an impressive experience of combat and logistics on a "faraway” battlefield. It also allowed for a wide variety of weapons and equipment — including the Su-57 and fifth-generation fighter jets — to be put into regular rotation. At the same time, due to the participation of private military companies, the conflict has not been “Afghanized,” thus the government’s reputation was not damaged. On the contrary, against the backdrop of numerous sanctions, Moscow managed to enforce an “equal dialogue,” demonstrate its significant role in world politics and prove its commitment to support Syrian sovereignty and government institutions, imperfect as they are.

However, these factors are meant primarily for domestic Russian consumption, as many still long for the glory of the Soviet past. In actuality, Moscow was most successful at utilizing the exhaustion caused by the conflict among regional and external actors, who themselves failed to create a strong anti-Assad alliance in face of their own differences. Moscow entered the crisis amid a competition of great powers and suffered from a lack of resources. Russia, nonetheless, deployed its troops in Syria, launched a military campaign, fragmented the opposition via de-escalation zones and enforced "reconciliation" between former rebel factions and Damascus, as seen in the southwestern region.

There’s a theory in Moscow that the actions of the United States and the Gulf monarchies deliberately sought to shift responsibility for Syria’s future onto Moscow, including having Russia resist Iranian influence in post-war Syria, however limited it may be.

Even if this were true, Russia benefited from the situation. Moscow hijacked the agenda, which it can now constructively discuss with various actors across the region, acting as a mediator both for the Syrian conflict and other regional crises.

The “stabilization” Russia promotes has not improved the living conditions of Syrian civilians in the southwest and elsewhere. But it created conditions that allowed Moscow to link the issue of refugee repatriation with programs of reconstruction in the areas where the refugees are supposed to return. Meanwhile, the Kremlin is hardly ready to take part in the operation in Idlib. Nor is it willing to bear the expenses of providing security if the United States withdraws its troops from eastern Syria. Russian business circles, except for the pro-government entrepreneurs involved in state-supported projects, are reluctant to invest into Syrian projects. The creation of the constitutional committee, which essentially coincided with the anniversary of the Russian campaign, hinders by default on the reform of the Syrian regime, as the political opposition and armed dissident groups are too weak.

As a result, Russia continues to balance relations between Turkey, Iran, the United States and Israel, and stay on good terms with Damascus. Even if its current tightrope walk is successful, Russia will eventually have to make a choice: either seek a compromise that could satisfy the outside players, or continue investing in saving the Assad regime. The bottom line is: One cannot count on Syria to be safe and secure through investments from Russian businesses and loyal Syrian nationals living abroad.