Russia is working on expanding the Hmeimim air base in Syria to accommodate all types of aircraft. 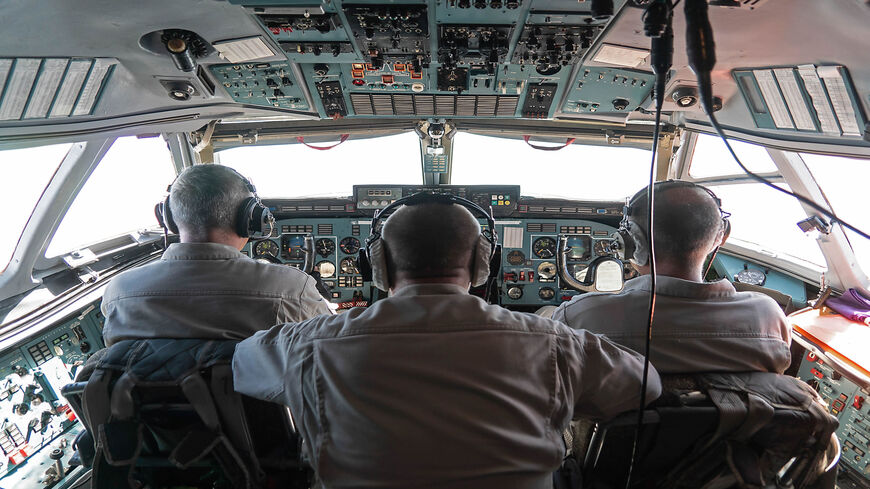 This picture taken during a guided tour by the Russian forces in Syria shows the cockpit and crew members of an Antonov 72 Russian military aircraft during a flight between Hmeimim air base and Aleppo, Syria, Aug. 16, 2018. - Andrei Borodulin/AFP via Getty Images

The Russian Ministry of Defense is currently working on expanding the capacities of Syria’s Hmeimim air base in Latakia countryside as part of Russia’s plans to entrench its presence in the eastern Mediterranean in the long run.

The War Zone website specialized in military analysis had published in a Feb. 5 report satellite images showing the ongoing work to expand one of the two main runways of the Hmeimim military air base by around 1,000 feet. “The extension would allow the base to support more regular deployments of larger and more heavily laden aircraft, including heavy airlifters and even potentially bombers,” the website stated.

Meanwhile, Russian media cited a Russian pilot as saying May 27 that it is now possible for airplanes to land at the Hmeimim air base, one after the other, with a time lapse of one minute. The pilot said that the airport at the air base will also be equipped to welcome civil airplanes.

In late April, reports circulated about the first flight between Israel and Syria, claiming that a Russian plane took off from Ben Gurion Airport in Tel Aviv toward the Hmeimim air base in Latakia.

Nasr al-Yousef, a Russian-Syrian journalist residing in Moscow and chairman of the board of Syrian Today news website, told Al-Monitor, “Moscow is handling the Hmeimim air base as Russian territory, and it is trying to control wide stretches in the surroundings of its bases and allowing expansion operations under the pretext of securing them against external attacks. As per the deal to control the Hmeimim air base, the Syrian regime has no right to monitor the cargo of planes and ships entering its bases. Russians and their guests can also enter and exit the bases without the need for an entry visa from the Syrian regime."

He added, "Since the Russian bases need many employees to control them because they contain service, administrative and productive institutions and since the area does not share land borders with Russia, the only solution was a civil airport for passengers to transfer this large number of employees in the bases.”

Abdel Wahab Asi, a researcher at the Jusoor Center for Studies in Istanbul, told Al-Monitor, “Russia is completing the expansion and maintenance of the airport’s runways to be able to accommodate the three Russian bombers that it recently introduced — TU 22 M3, TU-95 MS and TU 160. However, apart from Russia’s goal behind expanding the base — which is to increase the capacity of the Hmeimim base and transform it into an operational center in the region — it is working on making it a center to facilitate logistical and strategic transfers from Russia to Syria, and from there to any other base in the Middle East such as al-Jufra base in Libya or others in the future."

He said, "This reflects an unprecedented interest in the Middle East. The expansion also carries a message to the new US administration — that there will be no immediate withdrawal of the Russians [from the region] and that Syria is a major area of influence for them. The expansion operations make it easier to receive civil aircraft, provided that they are used in diplomatic and security trips, whether between Russia and the Syrian regime or any other country such as Israel, in the event that bilateral negotiations such as those that took place in early 2021 are conducted.”

Wahab Asi added, “Russia is refraining from using the Damascus or Aleppo airports or others because these airports might be destined for civil rather than diplomatic missions under the current instability. Russia is trying to secure the highest level of safety and trust, in case of a visit from Russian President Vladimir Putin, ministers of defense and foreign affairs, or any other high-ranking officials, including from Arab states and Israel, especially with the travel ban to and from Syria. The civil airports in Syria need costly restoration because their infrastructure has been destroyed [throughout the Syrian war] or due to lack of maintenance. Russia does not want to bear the cost of improving the function of tarmacs to expand the operation and capacity of these airports. Therefore, it is working on expanding its own military air base.”

Russia and the Syrian regime signed an agreement in 2019 that provides for Moscow's lease of the Tartus port for 49 years, in a move that consolidated Russian hegemony over the entire Syrian coast. Article 25 of the terms of agreement stipulates that it will be automatically renewed for another 25 years if neither of the parties sends a letter of intent through diplomatic channels requesting its termination, provided that the date of sending this letter is at least one year before the date of the expiry of the agreement.

Muhammad Fayez al-Asmar, a military analyst and Turkey-based Syrian army defector who provides analysis for a number of study centers and news channels, told Al-Monitor, “Russia is working for a long-term military presence and influence in Syria, by using its aviation to all the military and civilian airports in Syria, and working on deploying ground military bases and equipping them with modern weapons and equipment, buying the loyalties of Syrian military and security officers, appointing them to important leadership positions, and sending officers to Moscow to take leadership courses in Russian military and security academies. Moscow also seeks to expand the Tartus naval base and build new floating docks to receive barges, Russian warships and commercial ships, and provide them with logistical and technical services.”

He noted, “The Hmeimim airport can welcome civil airplanes because any military airport has this capacity if equipped with additional technical features. Work is currently underway to develop the Hmeimim airport on the security level by securing air defense and enhancing the capacity, speed and accuracy in providing the necessary technical services, such as repair, fuel filling, availability of hangars and maintenance workshops, not to mention modern firefighting, steering devices, lighting, navigational devices and towers that help pilots in the take-off and landing, day and night, during difficult weather conditions.”