Russia's repair shop in Tartus is working to build a floating dock, greatly expanding the capabilities of the military base. 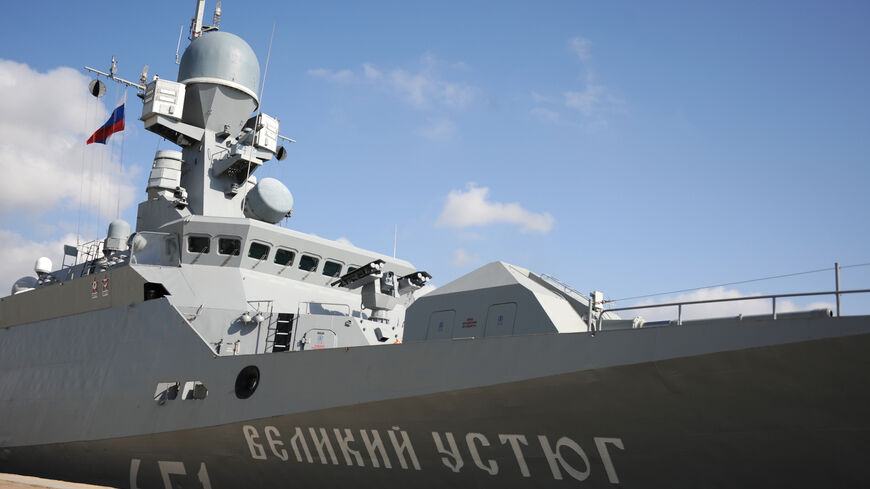 Russian corvette Velikiy Ustyug is pictured at the Russian naval base in the Syrian Mediterranean port of Tartus on Sept. 26, 2019. - MAXIME POPOV/AFP via Getty Images

The Russian Ministry of Defense is working to expand its naval base in the Syrian port of Tartus following the major expansion of the main Hmeimim base, located in the Latakia countryside.

On Feb. 5, a website called The Drive published satellite images showing work in progress to extend one of the two main runways of Russia's Khmeimim airbase outpost in Syria by around 1,000 feet. “The extension would allow the base to support more regular deployments of larger and more heavily-laden aircraft, including heavy airlifters and even potentially bombers,” the outlet reported.

A few days ago, the Russian TASS news agency quoted a source connected to the Russian military as saying that the ship repair shop at the Russian naval installation at Tartus will have a floating dock in 2022.

TASS stated that the Russian military is working to expand the technical capabilities of the naval base in the port of Tartus to facilitate the repair of ships and submarines. Repairs are currently carried out by floating workshops brought from the Black and Baltic Seas. Ships that need repair are sometimes sent to Russian ports.

Mohammed Fayez Al-Asmar, a defected colonel from the Syrian regime residing in Turkey and providing analysis for a number of research centers and news outlets, told Al-Monitor, “It has become known that Russia is seeking to conclude long-term agreements to create a permanent presence and strengthen its military capabilities in the Middle East." He explained that the floating dock is one of those projects. "This will make Russia’s bases in Syria a launch pad for Russia activities in the Middle East and the Arab Gulf region.”

He continued, “The floating dock will provide Russia with space to service its battleships, merchant ships and other vessels that roam the Mediterranean more quickly and at a lower cost. Russia will no longer need to withdraw idle ships that need periodic maintenance to the Baltic Sea or the Black Sea. It opted for the floating dock instead of a permanent one, because it will be quick to construct and at a low financial cost" Permanent docks are enormous and require extensive studies and great engineering efforts to construct, he said. "Meanwhile, floating docks can be dismantled and moved to another suitable area in the future.”

Mustafa Al-Mustafa, a researcher at Nama Center for Contemporary Research, told Al-Monitor, “It has always been clear that the United States was not interested in Syria and its operations were limited to the oil-rich areas [now] controlled by the Syrian Democratic Forces. Russia, meanwhile, has been Syria's staunch ally from the days of Hafez al-Assad. Also, Moscow faces no threat of being forced to leave Syria, and all the conflicting parties on the Syrian soil, including the armed opposition and Turkey, are ready to engage with Russia in hopes of getting rid of the regime. The only competitor for Russia in Syria is Iran. But all parties agree on coordinating to oust Tehran from Syria and get  Russia to fill the vacuum it will leave behind. All this reassures Moscow and prompts it to develop its bases in Syria and expand its presence in the Middle East.”

Of note, Russia and the Syrian regime signed an agreement allowing Moscow to lease the port of Tartus for a period of 49 years. The agreement entered into force in early 2018. Article 25 stipulates that it will be automatically renewed for another 25 years unless one of the parties sends a letter through diplomatic channels requesting its termination at least one year before the date of expiration.

Nasr al-Youssef, a journalist of Syrian origin living in Moscow and head of the Syrian Today news site, told Al-Monitor, “The floating dock will serve Russia's military and economic interests because it offers control of the port of Tartus. According to the agreement signed with the Syrian regime, Russia will contribute an estimated $500 million to develop the base and its capacity to receive large ships. … However, despite Russia’s lack of competitors in Syria, it still opted for constructing a floating dock instead of a permanent one. This could reflect Moscow’s unwillingness to stay in the port for a longer period. It seems the Russians preferred the less useful but foolproof option.”

Russians are deployed throughout Syria, within the regime-controlled areas and in the east of the Euphrates River, which is under the Kurds' control. Russian forces have also made it to the heart of the Syrian desert. In addition to the port of Tartus and the Hmeimim military base in western Syria, Russia is investing in a number of oil fields and phosphate factories in central and eastern Syria and signing dozens of economic agreements that analysts believe will consolidate Moscow’s hegemony over the Syrian economy.