Moscow has reportedly landed Tupolev Tu-22 bombers at Syria's Hmeimim Air Base for the first time. 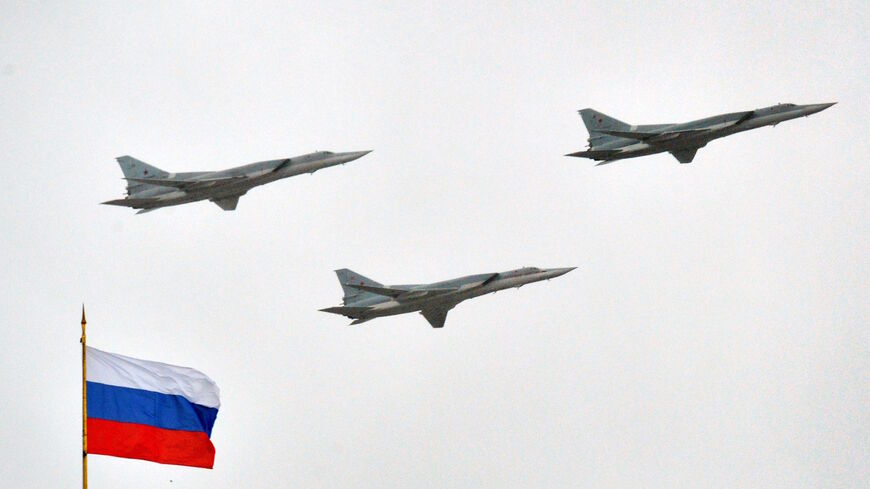 Russian Tupolev Tu-22M supersonic strategic bombers fly above the Kremlin in Moscow, on May 7, 2014, during a rehearsal of the Victory Day parade. - YURI KADOBNOV/AFP via Getty Images

Russia has based nuclear-capable bomber aircraft on the Mediterranean for the first time, the Defense Ministry in Moscow said Tuesday.

Three Tupolev Tu-22M3 long-range bombers were sent to Russia’s Hmeimim Air Base in western Syria after improvements were made to runways at the site. The aircraft will participate in training exercises over the eastern Mediterranean before returning to Russia, the ministry said.

If confirmed, the deployment would demonstrate an extension of Russia’s aircraft-based nuclear strike range well into the Middle East and Mediterranean region. Moscow has flown Tu-22s in combat missions in Syria before, but they were not based in the country.

Video purporting to show a Tu-22M over Latakia with landing gear extended circulated on Twitter and Telegram Monday prior to the Defense Ministry's statement.

A pair of what appears to be Tu-22M bombers were spotted over Syria's Lattakia today. pic.twitter.com/WJ5HoF2fZu

Hmeimim was constructed in 2015 as the Russian military’s central base of operations in support of Syrian President Bashar al-Assad amid the country’s civil war. The Kremlin retains the base as a main node of its long-term military presence in Syria alongside the naval base at Tartus.

The airbase has allowed Moscow to extend its reach into North Africa, where it intervened in Libya on behalf of rogue commander Khalifa Hifter in his 2019-2020 offensive against the UN-backed Libyan government in Tripoli.

Russia has flown thousands of Syrian mercenaries and its own Wagner paramilitary contractors into Libya via Hmeimim and shows little interest in removing its forces from the North African country despite requirements under the UN-backed cease-fire.

The vast majority of Russia’s senior military commanders have gained combat experience in Syria and have incorporated that experience into training and exercises, President Vladimir Putin claimed in Sochi on Tuesday.

Moscow’s use of Syria to project its power on the Mediterranean has been closely watched by Western military strategists.

The head of US forces in Africa, Gen. Stephen Townsend, warned Congress last year that Russia’s introduction of fighter aircraft into Libya could foreshadow the arrival of Russian air defenses, a move that would likely hamper NATO’s access to its southern flank.

Washington has continued to bolster military ties with Libya’s westerly neighbors amid Russia’s inroads into the region, moves the commander of US forces in the Middle East Gen. Kenneth “Frank” McKenzie has described as opportunist.

McKenzie has advocated additional weapons sales to US allies in the region as a way to dampen local governments' interest in Russian military technology and reduce their dependence on US forces in the region, Al-Monitor has reported.

Last November, the US Army announced it was consolidating command of its forces in Europe and Africa into a single headquarters.

The move was aimed at shoring up NATO’s southern flank and came at the direction of US Air Force Gen. Tod Wolters, who serves as NATO’s most senior commander and the head of all US forces in Europe.

Russian Su-27 fighter aircraft intercepted and flew alongside a US nuclear-capable B-52H bomber over the Baltic Sea last week in the latest of a running series of aerial encounters between the two adversaries.

The Kremlin confirmed on Tuesday that Putin would meet with President Joe Biden for a summit in Geneva on June 16.