Is Russia’s naval base in Sudan a signal to Turkey ... and Biden?

Moscow is set to create a strategic foothold in Africa along vital shipping routes. 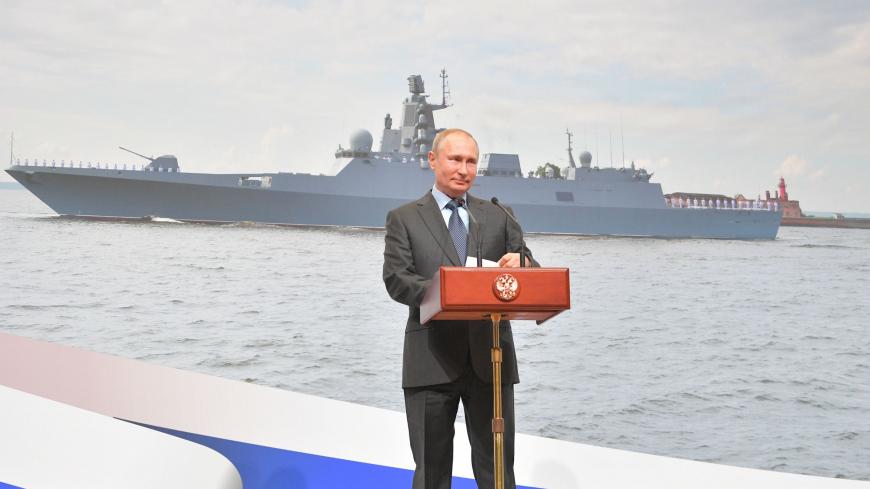 Russian President Vladimir Putin approved on Nov. 16 the government’s plans to create a naval facility in Sudan to service the needs of the Russian navy in the region and serve as a logistics center. The Russian Defense Ministry signed the respective agreement on the facility construction with Khartoum. Given the character of Russian authorities’ decision-making, most experts believe the decision concerning the establishment of the facility had been taken long before its formal announcement. The question, then, is the pace of the facility’s construction, something that will largely depend on the Kremlin’s priorities moving forward. And there are factors that can prompt one to be at least somewhat doubtful as to whether Russia is really all that serious about expanding its footprint in the region.

The first factor in this context is Russia’s constrained economic, military and logistical capabilities. According to the former chief of staff of the Russian navy, retired Adm. Viktor Kravchenko, the most primitive facility in the Red Sea will take three to four months to be completed.

As already noted by Al-Monitor, no concrete details of Russia’s presence in the Red Sea have been divulged so far. More to the point, we do not yet know what sort of base Russia would like to establish in Port Sudan. For example, the Soviet-era logistical facility in Vietnam had in reality served as a proper military base. Does Russia intend to deploy a full-scale facility containing infrastructure for military purposes? Or is this new base just a PR stunt that would merely be comprised of facilities providing occasional service to Russian ships, which are rare in the region anyway? The agreement for easing the passage of Russian ships was reached with Sudan last January, although Moscow has this sort of agreement with many countries — including Nicaragua, a wayward US ally.

There are objective obstacles that may stand in the way of the speedy deployment of the facility. All of the means to protect the base — air defense systems, the tools of electronic warfare together with the infrastructure equipment for social purposes (hospital unit, desalination units) — can be delivered in one of two ways. First, those components can be airlifted to Port Sudan 20 kilometers from the shore by transiting through Khmeimim air base, the route used by the Russian military as an "African hub." The other option is using the sea route. The difficulty, of course, is that Russia does not have many ships for long-distance travel at its disposal, even if we take into account the possibility for those ships to be serviced at Syria’s Russian naval base Tartus.

One expert dealing with the Russian energy sphere, who spoke with Al-Monitor on the condition of anonymity, suggested that a possible choice for the facility’s location may be the least suitable one from the point of view of energy supply. The Sudan facility will be deployed near a city of 600,000 residents that has an oil refinery and the largest dock in the country. At the same time, the city will contain just one diesel and oil-fuelled heat and power plant with a capacity of 337 megawatts. All of this creates problems with powering the facility given that, like the Syrian Khmeimim air base, it would have to be powered by the diesel generators that use fuel that would have to be shipped from Russia. There are not many energy resources in Sudan, and their costs are quite high anyway.

Furthermore, the point in the agreement that allows Russia to station four of its ships — including nuclear-powered ones — at the facility may all sound very well in theory. In practice, though, the Port Sudan infrastructure and the Red Sea in general are not well-equipped for mooring and servicing nuclear-powered submarines. The Iranians use diesel-electric submarines, while the Chinese are perhaps the only ones in Djibouti prepared to conduct large-scale bottom-dredging operations. Meanwhile, the Russian surface vessels with nuclear power units do not carry cruise missiles of the Kalibr type that Russian experts believe will frighten other regional players.

As noted by the head of the Center for International Security at the Primakov National Research Institute of World Economy and International Relations, Alexey Arbatov, the boost of Russia’s prestige in the region may incur additional costs, even if one accounts for the possibility of expanding Russia’s gold-mining operations in the country. On top of it all, Moscow will have to be mindful of the potential risk of political instability in Sudan, given the potential for a large-scale conflict to break out in the country.

The second factor one needs to keep in mind when reflecting on Russia’s ambitions in the region is competition with other players. China in particular has been expanding its footprint in the region and has brought its One Belt, One Road project to African countries. While the Kremlin may think that competition is a positive development and engaging in it can enhance Russia’s global standing, there are certain dangers arising from that competition.

Russian radical patriotic media already suggested that the naval base in Sudan is but an anti-Turkish step. Seen from this perspective, Russia came forth in its decision to establish the naval facility, while Ankara is still struggling to regain its influence following the deposal of Omar al-Bashir. As a result, Turkey has not been able to establish its own naval base in the country, not least because of Khartoum’s growing ties with the United Arab Emirates and Egypt following the revolution. Had Turkey established the facility, it would have helped it to project its power more effectively in conjunction with Turkish facilities in Qatar and Somalia. Turkey’s official position has been to dismiss any reports coming from the Gulf countries suggesting Ankara has military plans in Sudan. The agreement concerning the reconstruction of the Suakin port, Turkey authorities claimed, was aimed at turning the island into a tourist attraction, especially for hajj pilgrims. The Turkish Ministry of Foreign Affairs continues to claim that negotiations on the seaport have not broken down, and the Turkish Cooperation and Coordination Agency is continuing to restore Ottoman-era artifacts left on the island.

Now, there is a precedent for Russia to take an anti-Turkish stance in political disputes and even side with the anti-Turkish blocs in the region. One case in point is Libya, where Russia lent support to strongman Khalifa Hifter, who has ties to Egypt, the UAE and Saudi Arabia. And even if those actions by Moscow did not lead to serious adverse consequences in relations with Ankara, the Turkish factor can be a variable in shaping Russia’s behavior, at least to an extent. Indeed, some experts suggest in private conversations they do not rule out that the phrase in the agreement saying the “Sudanese side may itself use the facility for mooring the Russian navy” — if it is granted such access by Moscow — can mean that the facility may also be used by warships of other foreign powers; for example, Egypt.

Moreover, Port Sudan is situated opposite Mecca in Saudi Arabia. From this standpoint, Russia’s actions can be easily construed as destabilizing, especially given that, as some experts predict, Russia may deploy the reconnaissance assets in the facility as well as special forces and private military companies. Notably, Russian mercenaries are already present in Sudan, and their numbers will likely increase further.

Thirdly, and perhaps most importantly, Sudan’s grievances against the actions of Donald Trump’s administration also play a role. The idea of building the Russian facility on the Red Sea gained traction at the time when Trump first promised to remove Sudan from the list of a state sponsor of terrorism, but then extended the national emergency with respect to Sudan for a year after Khartoum made concessions in the form of paying out compensations to the victims of terrorist attacks and agreed to normalize relations with Israel.

It is thus logical to assume that the Sudanese may in the future be ready to use its ties with Russia as a currency in relations with the United States if the Joe Biden administration agrees to lift the existing sanctions. Sudan may possibly decide to walk back on its decision on the military base, even despite Khartoum’s interest in receiving military equipment from Russia.

At any rate, any Russian activity abroad comes down to the desire to demonstrate its strength vis-a-vis the United States. Biden’s team cannot avoid the topic of relations with Sudan. At the very least, it will have to try and induce Arab countries into normalizing ties with Israel, something a new US administration would likely construe as not just the product of Trump’s administration but a long-term process. Hence, the question becomes whether or not Moscow, like Sudan, is ready to use its new base as a currency in international politics.

“This is the time to restore our navy presence,” said Vladimir Komoedov, a retired Russian admiral and former commander of the Black Sea Fleet, commenting on the news of the facility construction. He said the facility will be another one of Russia’s installations deployed against the background of the supremacy of the United States and NATO in the Atlantic, Pacific and Indian oceans, as well as in the air, at sea and underwater."