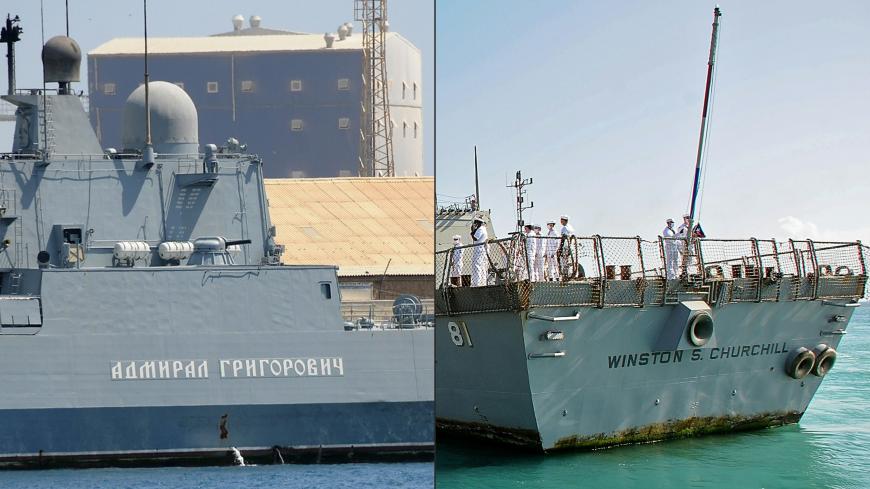 A US Navy destroyer on Monday docked in Port Sudan, on the African country’s Red Sea coast, as Washington looks to expand its ties with the post-revolutionary government in Khartoum.

The USS Winston Churchill arrived in port just a day after a Russian frigate, the Admiral Grigorovich, docked nearby ahead of implementation of a recent deal that would allow Moscow to establish a naval base there, AFP reported.

A pro-democracy uprising that ousted Sudan’s longtime dictator, Omar al-Bashir, in 2019 has provided the United States an opportunity to counter Russia’s attempts to expand its influence in Africa.

Last month, the USNS Carson City, a transport ship, became the first US military vessel to dock in Sudan in decades. The stopovers follow a visit in which US Navy Rear Adm. Heidi Berg and Ambassador Andrew Young, AFRICOM’s deputy to the commander for civil-military engagement, met with senior officials in Khartoum to discuss “pathways for partnership.”

The United States removed Sudan’s government from its state sponsors of terrorism list last year after officials in Khartoum made steps toward establishing a democracy and agreed to normalize ties with Israel. The outgoing Trump administration offered significant debt relief and removal from the terror list to extract the latter concession.

Meanwhile, Khartoum granted the Kremlin rights to establish a naval logistics center capable of housing nuclear-powered vessels at Flamingo Bay, just north of the eastern coastal city of Port Sudan. The 25-year lease is subject to renewal each subsequent decade. The Associated Press reported that Russia will provide Sudan with weapons and military equipment in exchange.

Russia also maintains the right to transport weapons and ammunition to the base, which will be protected by Sudan’s armed forces. The agreement also allows Russia’s military to offer training and cooperative support to Khartoum’s military — an influence-building tactic which US commanders have sought to parry with competing offers around the globe.

Moscow's support for Syrian dictator Bashar al-Assad in his country’s brutal civil war allowed the Kremlin to keep its only Mediterranean naval base at Tartus and granted it an air base at Khmeimim.

Khmeimim has enabled Russia to fly Wagner paramilitary fighters and weapons into Libya to aid strongman Khalifa Hifter in his war against the United Nations-backed government in Tripoli.

The US military merged command of its army forces in Africa and Europe in November. The Pentagon in recent years has increasingly sought to refocus its priorities on contesting both Russia's and China’s attempts to expand their influence abroad.

East Africa has drawn increased strategic interest amid growing economic potential, as well as the ongoing war in Yemen and threats to maritime security in the Arabian Sea and Persian Gulf.

Foreign Policy reported earlier this month that the Biden administration has considered creating a special envoy position for the Horn of Africa as US officials deliberated whether or not to return special operations troops to Somalia, where they have trained local forces in combat against al-Shabab extremists.

A revamped Russian naval presence on the Red Sea could allow Moscow to exert pressure on the flow of goods from the Pacific to Europe and potentially on petroleum supplies from the Persian Gulf.

Meanwhile, Moscow is rushing to complete a second pipeline to Germany that would bypass Ukraine and double Russia's natural gas export capacity to Europe. Eighteen companies have recently quit the Nord Stream 2 project amid the threat of US sanctions, the State Department informed Congress last week.