Erdogan more isolated than ever on Syria

The Turkish president is on the defensive after Turkey’s shooting down of a Russian warplane; the Syrian war enters a more dangerous phase. 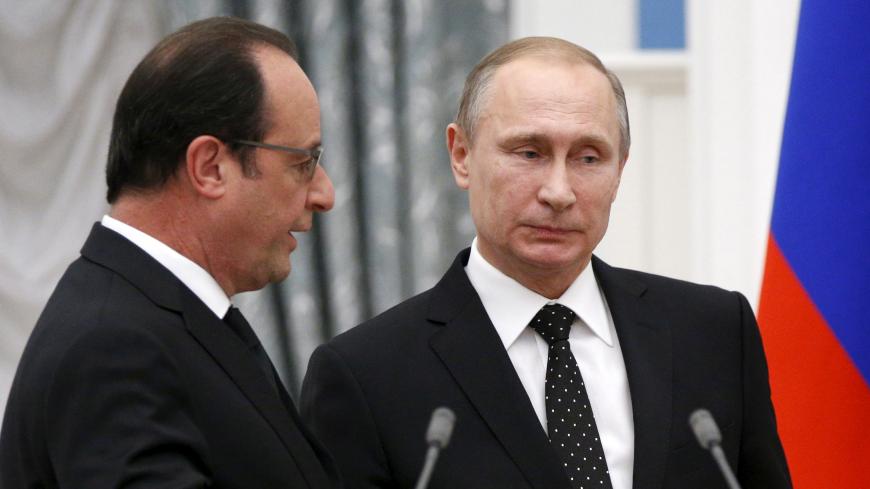 Russian President Vladimir Putin (R) and his French counterpart, Francois Hollande, speak after a news conference at the Kremlin in Moscow, Nov. 26, 2015. France and Russia agreed to exchange intelligence on the Islamic State and other militant groups in Syria to help improve the effectiveness of their aerial bombing campaigns in the country, Hollande said. - REUTERS/Alexander Zemlianichenko

The most notable consequence so far of Turkey’s shooting down a Russian fighter jet Nov. 24 has been a possible opening for a deepening of Russia’s cooperation with the US-led coalition against the Islamic State and a free fall in Turkish-Russian relations.

Russian President Vladimir Putin and French President Francois Hollande agreed Nov. 26 to share information about targets in Syria and to strike “only terrorists.” Putin added that Russia is “ready to cooperate” with the US-led anti-IS coalition.

Credit for the inspired diplomacy of turning crisis into opportunity goes to Hollande and US President Barack Obama, who apparently have decided that the overall objective of ending the war in Syria should not be held hostage to Turkey’s aggressive response to the Russian warplane’s alleged violation of Turkish airspace.

In another sign of Turkey’s increasing isolation on Syria, The Wall Street Journal's above-the-fold feature on Nov. 28 was a report on how the United States has been pressing Turkey to seal its side of the Turkish-Syrian border. The article quotes a senior Obama administration official as saying “enough is enough. … This is an international threat, and it’s all coming out of Syria and it’s coming through Turkish territory.”

Metin Gurcan explains the context of the battle that led to the confrontation between Russian and Turkish aircraft. Gurcan writes that Syrian military forces backed by Iranian Shiite militias and Russian air power have been battling Turkmens, the Army of Conquest and Jabhat al-Nusra forces in the predominantly Turkmen Bayirbucak region since Nov. 19, which is only 9 miles from the Turkish border. Syria and its allies are seeking to clean this mountainous and densely forested area from opposition fighters as a precursor of further Syrian regime and Russian moves toward Idlib and Aleppo and “to expel Chechen Caucasian fighters from Bayirbucak” in advance of a possible cease-fire.

Semih Idiz reports that Ankara had protested Russian and Syrian attacks on Syrian Turkmen forces in this region, and quotes Turkish Prime Minister Ahmet Davutoglu as saying Nov. 22, two days before the incident, “We are prepared to take all the necessary diplomatic and other measures in order to protect our brothers there, and wherever they may be, against any threat, and to preserve their human rights.”

Idiz explains how Turkey’s actions have served to undermine its case in support of its Turkmen allies in Syria: “Once Turkey’s national 'feel good' moment of having shown its resolve and military capability by the downing of the Russian jet fighter is over, attention will shift to the diplomatic field to see what political fallout there is in the aftermath of this incident. … NATO went through the motions of calling for an emergency meeting to discuss the issue, as it has to by its charter, but few expect it to opt for an escalation of the crisis. Given that there is little sympathy in the West for radical Islamic groups following the Paris attack, and that France is acting with Russia to bomb IS targets in Raqqa, it is likely that Moscow will have the upper hand at the Security Council. This means that Turkey is unlikely to gain much sympathy from its allies for the Turkmens, or other radical Sunni groups in the region fighting the Syrian regime. Turkey ultimately remains at odds with its allies over the question of fighting the Assad regime, which US Secretary of State John Kerry has said is not part of their military mission in Syria, where they are to fight IS and to aid groups committed to fight this group. Without the active support of its allies, though, there is little that Turkey can do in the end to respond to Russia and the Assad regime in northern Syria in order to secure the Sunni-dominated political configuration in the region that it wishes to see.”

The incident has drawn increased scrutiny to Turkey’s approach to Syria’s Kurds, which is in direct contrast with both US policy and Russian initiatives in Syria. Erdogan said Oct. 14 that there is “no difference” between the Patriotic Union Party of Syria (PYD), the leading Syrian Kurdish group there and IS. The US has singled out the People’s Protection Units (YPG), the armed wing of the PYD, as among its most effective Syrian partners, so US and Turkish policy will eventually face a day of reckoning, as the differences are to date irreconcilable.

Cengiz Candar writes that “the souring of relations between Ankara and Moscow might also cast a shadow on the cooperation between Turkey and the United States to evict IS from the 98-kilometer (61-mile) border that is still under the control of IS in northern Syria. Turkey enlisted the Americans by opening up its Incirlik Air Base in exchange for a tacit pledge to prevent YPG forces from moving ‘west of the Euphrates.’ If Russia were to provide overt support to the YPG in its quest to remove IS from the border region, such a political move could further complicate not only US-Russian relations but also the cooperation between Washington and Ankara. After all, Turkey is a member of NATO, but for Washington, under an Obama administration serving its last year in office and increasingly reluctant to engage in any sort of direct military involvement in Syria, it might be difficult to push 'the unruly teenager of the Transatlantic Alliance' to invoke Article 5.”

Zulfikar Dogan describes how Erdogan’s Justice and Development Party (AKP) has successfully divided and weakened the Peoples’ Democratic Party (HDP) by equating the HDP with the Kurdistan Workers Party (PKK). Orhan Cengiz reports that a shadowy Islamist paramilitary force, termed “Allah's lions” (Esedullah), has been operating in Turkey’s predominantly Kurdish southeast regions against the PKK. The security situation in these areas is the worst it has been in a decade. “What has emerged so far from news reports, witness accounts and images in the media,” Cengiz writes, “suggests that a group within the police — religiously motivated, heavy-handed and hostile to Kurds — is increasingly taking the forefront in security operations in the southeast. The locals tend to believe these policemen share the same mindset as IS fighters and see them as an IS-linked paramilitary force. Regardless of whether this perception has any factual basis or stems from psychological fears only, one thing is certain: It serves no good for Turkey’s Kurdish problem, already mired in conflict, tensions and mistrust.”

Erdogan has shown signs of seeking to de-escalate the crisis, which has proved a fiasco, despite the nationalist chest thumping, as Pinar Tremblay reports, and the platitudes about self-defense from NATO allies. Erdogan has appealed, so far without success, for a meeting with Putin, perhaps during the climate talks that start in Paris on Nov. 30. Such a meeting, in the company of other world leaders, could yet be another step forward for a political settlement in Syria and a more coordinated military campaign against IS.

Turkey’s shooting down of the Russian jet signals that the Syrian war has entered a new, more dangerous phase. No more is Syria just a "proxy war" between Syrian parties backed by Iran on the one side, and Qatar, Saudi Arabia and Turkey on the other. The battlefield now includes American, Russian and Iranian "boots on the ground." Russia has two military bases and provides air cover for all of Syria. Turkey prudently suspended its air operations over Syria. The stakes have far exceeded both Erdogan’s personal vendetta against Assad and his desire to thwart the Syrian Kurds. Turkey’s reckless action put NATO on the hook for a type of escalation that would have repercussions beyond Syria. The credit goes to Obama, Hollande and Putin for weathering the storm.

The incident draws attention to Turkey’s grudging and half-hearted contribution to the war in Syria. If Russian planes were indeed targeting groups affiliated with Jabhat al-Nusra, should Ankara not grant them a few minutes of airspace? The point here is not to get into the back-and-forth about the specifics of whether the Russian and Turkish planes followed appropriate procedures to change the flight path of the Russian plane. The point, more broadly, is that Turkey’s actions in the war against IS may be of a lesser nature than those of Russia and Iran, not to mention Assad’s forces, who are actually engaging IS and Jabhat al-Nusra fighters. There are also the questions of the flow of foreign fighters and illicit trade along the Turkish-Syrian border, which are the subject of several UN Security Council resolutions.

Another dimension of the new phase of the Syria war regards the role of Syrian troops in the battle against IS and Jabhat al-Nusra. Both Hollande and French Foreign Minister Laurent Fabius referred to the use of Syrian government troops to combat IS, although only in the context of a political transition without Assad. The reality is that Syrian troops, backed by Iran, Hezbollah and Russia, are the most effective Arab force battling these terrorist groups, as Arab coalition forces are almost nonexistent, as Bruce Riedel wrote last week, and many of the opposition forces are now penetrated by Jabhat al-Nusra, as the United Nations and other organizations have pointed out. It might be a fair question to ask that if Syrian military forces, backed by Iran and Hezbollah, retake Aleppo, will the citizens of Aleppo be clamoring for the return of sectarian forces backed by the Arab Gulf states, or welcome the new forces in hopes of calm?

If the Vienna process gets traction in the coming months, the next frontier will be whether those who have backed opposition and Salafi forces in Syria, especially Saudi Arabia, will keep their focus on whether Assad should go, as part of a negotiation over a transition, or continue to carry the fight against the so-called Iranian axis to break Iran’s relationship with Syria. This trend is worth watching, especially if the Russian-Iranian-Syrian-Hezbollah alignment continues to take the fight to terrorists on the ground, and both Syrians and the international community, eager to end the scourge of IS and other terrorist groups once and for all, grow tired of the sectarian agendas that have caused so much misery for the Syrian people.