After Turkey's 'stab in the back' to Russia, will anyone support Ankara?

After it shot down a Russian fighter jet, Turkey is unlikely to get much support from its allies. 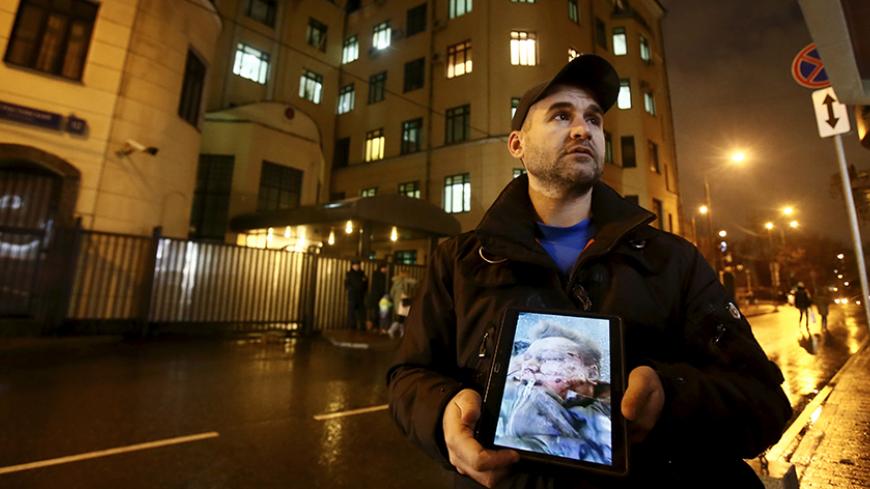 An activist holds a tablet with a picture showing what was said to be the lifeless body of a Russian pilot of a warplane shot down by Turkey, in front of the Turkish Embassy in Moscow, Nov. 24, 2015. - REUTERS/Maxim Shemetov

Turkish-Russian relations, already tense due to Moscow’s military engagement in Syria to aid the regime of President Bashar al-Assad, took a dangerous turn Nov. 24 when a Russian SU-24 fighter jet was shot down by the Turkish military. Ankara said the plane had violated Turkey’s airspace, a claim that Russia is rejecting.

The incident follows angry statements in recent days from Ankara aimed at Russia for hitting targets north of Latakia, in regions surrounding Turkmen Mountain, where Turkmen fighters armed and supported by Turkey are fighting the Syrian army, supported by Russian fighter jets.

A fuming Russian President Vladimir Putin warned Ankara after the downing of the jet that there would be “significant consequences,” signaling that the tone of Turkish-Russian ties will be changing radically.

"The loss today is a stab in the back, carried out by the accomplices of terrorists. I can’t describe it in any other way. Our aircraft was downed over the territory of Syria using an air-to-air missile from a Turkish F-16. It fell on Syrian territory 4 kilometers [2.5 miles] from Turkey,” Putin told reporters in Sochi while waiting for King Abdullah II of Jordan.

“Neither our pilots nor our jet threatened the territory of Turkey. This is obvious. They are fighting terrorists in the northern areas around Latakia,” he added.

Turkish Prime Minister Ahmet Davutoglu reacted angrily to Russia on Nov. 22 for hitting Turkmen targets in the region mentioned by Putin, saying that Turkey would respond without hesitation if Turkish airspace was violated during these joint operations by the Syrian army and the Russian air force.

“A massacre of Syrian civilians, and particularly Turkmens, must not take place in this region under the guise of fighting Daesh,” Davutoglu said, using an alternate reference for the Islamic State and underlining that there was no IS presence in regions being bombed by Russia.

“We are prepared to take all the necessary diplomatic and other measures in order to protect our brothers there, and wherever they may be, against any threat, and to preserve their human rights,” he said, adding that Turkey would take the matter to the UN Security Council.

The two pilots from the downed Su-24 were reported by witnesses on the Turkish side of the Syrian border as having ejected before their jet crashed. Turkish media said after the incident that at least one of the pilots was in the hands of Turkmen fighters.

Some reports, including photographic evidence, claimed the second pilot had been killed in the incident. The fate of the two pilots is expected to add to tensions between Ankara and Moscow. The incident comes a day before Russian Foreign Minister Sergey Lavrov was due to visit Turkey for talks on Syria but reportedly canceled the visit.

The Turkish General Staff’s office said in its statement on the incident that “a fighter jet of unspecified origin” had been downed by two Turkish F-16 fighter jets around 9:20 a.m. Nov. 24 in the Yayladag region of Hatay province, after having been “warned 10 times within the space of five minutes” that it was violating Turkish airspace.

It added that the Turkish air force had responded according to rules of engagement specified for such violations, and provided radar analysis maps which it said showed the violations clearly.

In its statement on the incident, the Russian Defense Ministry confirmed that the downed jet belonged to Russia and denied that it had violated Turkish airspace.

“The plane was located at an altitude of 6,000 meters (approximately 19,600 feet). The fate of the pilots is being determined. According to the preliminary data, the pilots were able to eject. The circumstances of the plane's crash are under investigation. The Russian Ministry of Defense notes that during the flight the plane stayed strictly within Syrian airspace and the flight was logged," the statement read.

This development has merely added to the complications Ankara faces with regard to the Syrian crisis. Some are suggesting that Turkey may end up gaining little from this incident with regard to its plans for Syria, instead increasing Moscow’s resolve to fight anti-Assad groups supported by Ankara.

Turkey is also taking the matter to NATO and the UN Security Council, where Russia has a veto. A Western diplomat talking to Al-Monitor on condition of anonymity due to his sensitive position said NATO would show solidarity with Turkey, but would work to de-escalate the crisis, not wanting to get embroiled in a military entanglement with Russia at a sensitive moment in the fight against IS in Syria and Iraq.

Ankara insists that there is no IS presence north of Latakia, where Turkmens are located, and says Russia is hitting legitimate groups fighting the Syrian regime. The pro-government Russian media, for its part, has reported that the Turkmens in the region are allied to radical Islamist groups such as Jabhat al-Nusra, which has been designated as a terrorist group by Washington and Moscow, and even by Ankara, albeit unwillingly, according to Western diplomats.

Earlier in the day Murat Yetkin, the editor-in-chief of the English-language Hurriyet Daily News and an expert on foreign policy issues, told the CNN Turk channel that the planned visit by Lavrov to Turkey for talk with Foreign Minister Feridun Sinirlioglu had gained added importance now.

“If this visit does not take place, it will show the seriousness of the matter. If he comes, we will understand that he wants to contain and control the crisis,” Yetkin said, speaking before news came that Lavrov had canceled his visit.

Pointing out that Ankara and Moscow are both engaged in the Vienna talks on Syria, Yetkin added that he did not think this incident would lead to a “Turkish-Russian war.” Yetkin also argued that the downing of the Russian jet was a blow to the Syrian regime.

Retired Brig. Gen. Naim Baburoglu, who works as a military analyst for the 21st Century Turkey Institute,” said there is no question that the Russian jet violated Turkish airspace. He told Al-Monitor that this fact is verifiable, not just by Turkey, which has already provided radar maps tracking the flight path of the Su-24.

“This is ultimately NATO’s eastern border, and is also being monitored by alliance facilities in the region. The Turkish armed forces would not make such a claim without proof,” Baburoglu said

He added that Russia, through its liaison officer at the Turkish general headquarters, and its military attache in Ankara, were made aware of Turkey’s rules of engagement in the region in the event of a violation some time ago.

Baburoglu believes, however, that this incident will increase Putin’s determination to stand behind the Syrian regime, and could also lead Moscow to increasingly support anti-IS Syrian Kurdish groups considered terrorist organizations by Ankara.

“Putin is not known to climb down,” Baburoglu said, adding, “Turkish-Russian relations will not be the same after this.” Maintaining that the Turkmens in the regions of northern Syria, which Russia has been bombing recently, are allied to al-Qaeda-related groups such as Jabhat al-Nusra, and other radical Islamist groups such as Ahrar al-Sham, Baburoglu said Moscow would underscore this fact at the UN Security Council.

“Russia will also hit these groups much harder now. This means it will bomb the Turkmens with even more intensity,” he said.

“In addition to this, it has the economic advantage over Turkey in terms of energy supplies and could use this as a weapon against Ankara even if it means a financial loss to itself,” Baburoglu added.

Once Turkey’s national “feel good” moment of having shown its resolve and military capability by the downing of the Russian jet fighter is over, attention will shift to the diplomatic field to see what political fallout there is in the aftermath of this incident.

The position taken by Turkey’s NATO allies will also be significant. NATO went through the motions of calling for an emergency meeting to discuss the issue, as it has to by its charter, but few expect it to opt for an escalation of the crisis.

Given that there is little sympathy in the West for radical Islamic groups following the Paris attack, and that France is acting with Russia to bomb IS targets in Raqqa, it is likely that Moscow will have the upper hand at the Security Council.

This means that Turkey is unlikely to gain much sympathy from its allies for the Turkmens, or other radical Sunni groups in the region fighting the Syrian regime.

Turkey ultimately remains at odds with its allies over the question of fighting the Assad regime, which US Secretary of State John Kerry has said is not part of their military mission in Syria, where they are to fight IS and to aid groups committed to fight this group.

Without the active support of its allies, though, there is little that Turkey can do in the end to respond to Russia and the Assad regime in northern Syria in order to secure the Sunni-dominated political configuration in the region that it wishes to see.