Leading military analysts say Putin is trying to draw Ankara into a fight that could have disastrous results for Turkey. 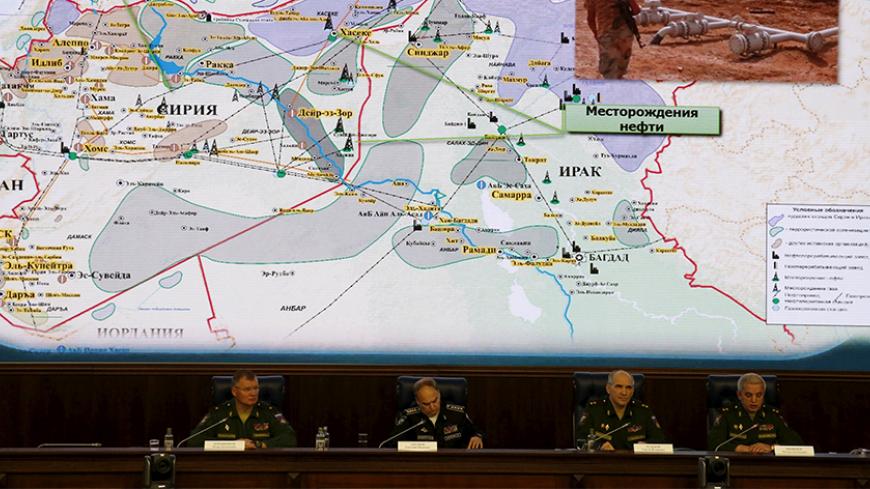 Russian Defense Ministry officials sit under a display showing the Turkish-Syrian border during a briefing in Moscow, Dec. 2, 2015. - REUTERS/Sergei Karpukhin

Tensions between Russia and Turkey continue to escalate following the downing in November of a Russian Su-24 fighter jet that strayed into Turkish airspace.

Questions are being raised now whether the two countries are heading for a military confrontation. A leading Turkish military expert told Al-Monitor that such a Russian move could spell disaster for Turkey.

Turkey accused Russia of violating its airspace again last week and summoned Russia’s ambassador in Ankara to lodge a formal protest. President Recep Tayyip Erdogan and Prime Minister Ahmet Davutoglu also warned Moscow that it was playing with fire and would have to face the consequences.

Tellingly, however, the Russian Su-34 fighter jet was not shot down this time. Despite Ankara’s dire warnings to Moscow, the protest lodged with the Russian ambassador shows that Davutoglu's government, despite its apparent tough stance, is treading more cautiously to avoid another head-on military incident with Russia.

“Before the violation actually took place, the Russian plane was warned numerous times by Turkish air radar units both in English and Russian,” it said, adding that this new violation was “another example of Russian escalatory behavior.”

The statement indicated that such actions would lead to serious consequences, for which Russia would be totally responsible. Moscow has denied these accusations, referring to them as “Turkish propaganda.”

"Statements by the Turkish side of an alleged case of violation by the Russian Su-34 aircraft of airspace are unsubstantiated propaganda," Russian Defense Ministry spokesman Maj. Gen. Igor Konashenkov said in a statement Jan 30.

Talking to reporters prior to flying to Chile for an official visit Jan. 30, Erdogan also said the latest Russian violation was an attempt to escalate the crisis between the two countries. “If Russia continues to violate Turkey’s sovereign rights in this way, it will suffer the consequences,” Erdogan warned.

A similar warning came from Davutoglu a day later in Riyadh, where he was for talks on Syria. Deriding Russia’s denial, Davutoglu said that it was impossible to hide such violations from anyone in this day and age.

“Turkey does not intend in any way to increase the tension with Russia,” Davutoglu said, pointing out that the operation the Russian jet was conducting when it violated Turkish airspace indicated that Moscow’s intention were not good.

“We are warning Russia once again. The damage they are doing to Syrian opposition elements and the threatening stance they are maintaining with regard to Turkish airspace is not to Russia’s advantage,” he said, adding that Turkey “had taken all the necessary precautions along its border with Syria.”

The Turkish media has reported that the Turkish air force has put its bases on “orange alert” and deployed additional jets to bases near the Syrian border, while ordering its pilots to strike, without further orders, anyone violating Turkish airspace.

The Pentagon has also corroborated the violation by Russia. “We are aware of reports and can confirm that yesterday another Russian combat aircraft violated Turkish — and NATO — airspace,” Pentagon spokesman Mark Wright was cited by the Russian media telling the RIA Novosti agency in a written statement.

NATO Secretary-General Jens Stoltenberg also weighed in on Turkey’s behalf and called on Russia “to act responsibly and fully respect NATO airspace.” He added, “Russia must take all necessary measures to ensure that such violations do not happen again." Stoltenberg said, "NATO stands in solidarity with Turkey and supports the territorial integrity of our ally, Turkey."

Meanwhile, developments in northern Syria are aggravating tensions between Ankara and Moscow. Following the downing of its jet, Russia intensified its air campaign, particularly against the Turkmens, but also against radical Islamic groups supported by Turkey, Saudi Arabia and Qatar that are fighting the Syrian army.

Russia has a particular ax to grind with the Turkmens because it was their fighters who killed the Russian pilot in his parachute after he ejected from the Su-24. Turkmen refugees have started entering Turkey as the Syrian army gradually takes control of the region with Russian air support.

Turkey’s preventing the Democratic Union Party (PYD), the largest group representing the Syrian Kurds, from joining the Geneva talks on Syria on the grounds that it is a terrorist organization allied to the Kurdistan Workers Party (PKK) seems to also have played into Moscow’s hand.

Russia has an added incentive now to support the PYD and hit Turkey in its most sensitive spot, namely the Kurdish issue. Russia says it is unthinkable that the PYD can be kept out of the Geneva talks and insists the group will be part in these talks in the future.

Meanwhile, the Turkish media is reporting that Russia had started to provide air support to the PYD’s military wing, the People's Protection Units (YPG), west of the Euphrates River. This is bound to further fuel tensions between Ankara and Moscow.

Worried that the Syrian Kurds will gain an autonomous region along its border with Syria, Ankara has declared a PYD/YPG presence west of the Euphrates to be a red line. But what can Turkey do to stop this and the Syrian advances in northern Syria with Russian help? The same question comes up if Russia violates Turkish airspace again.

Al-Monitor discussed this matter extensively with retired Brig. Gen. Naim Baburoglu, who is currently an adviser to the Ankara-based National Security and Foreign Policy Research Center and a frequent commentator on military matters.

Baburoglu indicated that Ankara had entered a high-risk area in its crisis with Russia. “Since the downing of its Su-24, Russia has augmented its forces in the region with Su-34 and Su-35 fighter jets, which are far more advanced than Turkey’s F-16s,” Baburoglu said.

Baburoglu said Russian President Vladimir Putin is not prepared to let this affair go and is trying to draw Turkey into a fight, not just by violating Turkish airspace but also by destroying the Turkmens in Syria and supporting the YPG.

Judging by what Baburoglu says, there seems to be little Turkey can do to respond to the Russian challenge.

“Since the downing of the Russian jet, Turkish F-16s are unable to fly in Syrian airspace. The US doesn’t want them there either in case they confront Russian jets,” Baburoglu said. He pointed out that the Russian Su-35 Flanker-E type jets deployed in the region, which are far more advanced than anything Turkey has, is of concern to Washington.

“Russia is trying to draw Turkey into a fight to avenge the downing of its jet. Putin is confident he can win. He also needs this to counter domestic difficulties. Downing one or two Turkish F-16s will make him a hero at home,” Baburoglu said. “It will also be a serious embarrassment to Turkey and the Turkish air force,” he added.

Baburoglu also doubts that NATO will rush to Turkey’s assistance the way Ankara wants in the event of a confrontation with Russia.

“Decisions are taken unanimously in NATO. The US and UK may support Turkey militarily, but it is doubtful that countries like France, Germany and Greece will. All NATO is likely to do is to deploy Patriot anti-ballistic missiles in eastern Turkey and allocate AWAC [Airborne Warning and Control System] planes to support the Turkish air force.”

Baburoglu conceded that domestic considerations may still push Erdogan into supporting an intervention in Syria, but he believes such an intervention could have disastrous results for Turkey.