After shooting down Russian jet, what's next for Turkey?

The Syrian army offensive backed by Russia in the region northeast of Latakia and the downing of a Russian Su-24 by Turkey leaves many to wonder which scenario will play out in the coming weeks . 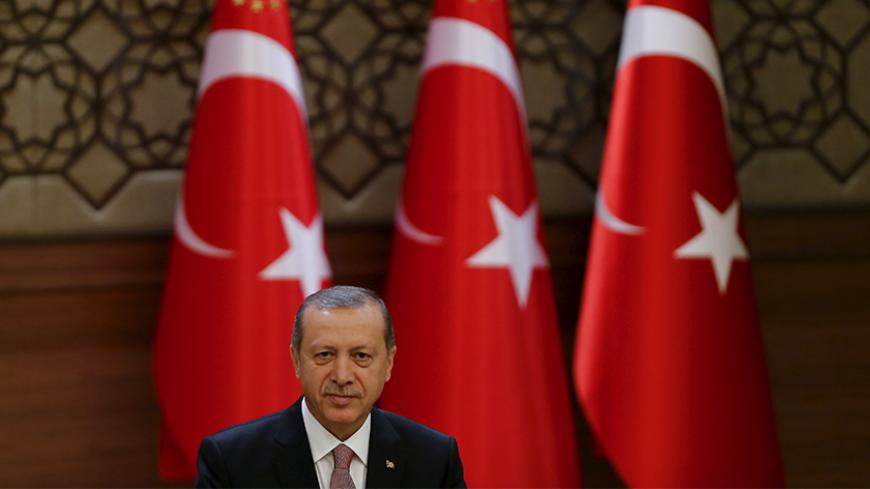 Turkish President Recep Tayyip Erdogan makes a speech during his meeting at the Presidential Palace in Ankara, Nov. 26, 2015. - REUTERS/Umit Bektas

If one wonders what targets the Russian planes and Syrian air force have been bombing most heavily since Nov. 19, the answer would be the Bayirbucak area, between the northeast of Latakia and west of Aleppo, where about 90,000 Turkmens live and which has been under the control of anti-regime opposition forces, including Turkmens, for the last 3½ years.

Attacks by Syrian President Bashar al-Assad's ground forces and Iranian Shiite militias against Turkmen Mountain, which is 15 kilometers (9 miles) from the Turkish border and dominates Latakia and Gimam village in the area of Kizildag to the north, have been ongoing for the past three days at Bayirbucak’s areas of Acisu, Firinlik and Kizildag, with close air support of Russian Su-24s and Su-25s and heavy bombing by Syrian air force MiG-29 planes.

According to information Al-Monitor obtained from local sources, Assad's forces supported by the Russian air force and on the ground by Shiite militias affiliated with Iran’s Zulfiqar Brigade have gained the complete control of Turkmen Mountain, and shifted their offensive toward Kizildag.

The Syrian regime forces are confronted by the Turkmen Sultan Abdulhamid Brigade and Sultan Murad Brigade deployed on Turkmen Mountain. Al-Monitor was told that militants of the Army of Conquest, Ansaruddin Front and about 500 Jabhat al-Nusra fighters have joined the Turkmens.

In this confined area some 10,000 soldiers of the Syrian regime backed by the Shiites are fighting against roughly 6,000 Turkmens, the Army of Conquest and Jabhat al-Nusra fighters.

Why are the Assad regime and Russians fighting at Bayirbucak?

Studying the field developments and listening to Russian decision-makers, one can discern three basic reasons for this operation: to secure the Latakia region where Russia has its largest military presence — to clean this mountainous and densely forested area from opposition fighters is the prerequisite of further Syrian regime and Russian moves toward Idlib and Aleppo; to expel Chechen Caucasian fighters from Bayirbucak; and — according to Mehmet Akif Okur, assistant professor of international relations at Gazi University — the desire of the Assad regime to secure more defensible, expanded territory before an eventual cease-fire as recommended in the Vienna meetings goes into effect.

“Looking at the field indicators, the regime doesn’t want Turkey to have a common border with the Syrian Sunni masses,” Okur said.

He added that the real struggle against the Islamic State (IS) will follow a cease-fire to be called by the UN Security Council. Okur thinks IS, which has withdrawn from the Hasakah region, shows signs of withdrawing from the Aleppo-Idlib line as well. Assad forces will be poised to fill the void, but in order to control this area they will need to control Bayirbucak first.

“Another possibility is the non-applicability of the Vienna calendar. In that case, all parties will try to hold on to the areas they are actually controlling. Bayirbucak, in the area north of Latakia and close to the Syria-Turkey border, then becomes essential for Assad's forces to control,” Okur said.

Turkey refrained from any perceptible move until the fall of Gimam in the regime’s Bayirbucak offensive, except to deplore Russia for its part in the operations in the last days of particularly heavy attacks. Turkey summoned Russia’s Ambassador Andrey Karlov to express its concern about the attacks.

The diplomatic crisis between Turkey and Russia triggered by the Bayirbucak operation took a completely different turn Nov. 24 when a Turkish F-16 flying an air combat patrol shot down a Russian Su-24 with an AIM-9X Sidewinder missile. With this incident, the worst-case scenario of a Russian warplane being shot down by Turkish planes I had written about in my Al-Monitor article Oct. 9 became reality.

From a radar picture released by the Turkish military shortly after the incident that shows the radar tracks of the Russian plane and voice recordings of warnings issued by Turkish planes, it is understood that the Turkish air force used UHF 243.000 MHZ emergency call channel to warn the Russian plane 10 times in five minutes, and only then shot it down for violating Turkish airspace.

What's next for Turkey? This is the question on everyone's mind in the country. There are three possible scenarios.

The best-case scenario is for life to go on as if nothing has happened. Both Russia and Turkey will opt to reduce tensions and treat the issue as a low profile one, similar to after the downing of the Russian passenger plane over the Sinai Peninsula on Oct. 31. The ramifications of the incident will be controlled through back channel diplomacy, and will eventually drop from the global agenda. We may still hear reports of mock dogfights, airspace violations and mutual angry statements by officials, but these will not be any more than a show of force to appease their respective publics.

In the worst-case scenario, the first move will be a Russian retaliation. Russia by using its Su-30 and MiG-31 interceptors may try to shoot down a Turkish jet in Syrian airspace or on patrol along the border.

In the worst-case scenario, it could retaliate by employing a passive infrared ground-to-air system that doesn’t leave a radar track. It may hit a Turkish civilian or military plane flying over Syria or along the border, similar to what happened with the Malaysia Airlines flight MH17 shot over Ukraine in 2014. Nobody will accept responsibility and the issue will be inconclusive. Even worse would be for Russia to launch a proxy war against Turkey by making use of clashes in Syria and/or with the Kurdistan Workers Party.

Of course, as widely predicted, Russia could apply damaging sanctions on Turkey, which is dependent on Russian natural gas and counts on Russia for the construction of the Akkuyu nuclear power station and continuation of the lucrative flow of Russian tourists. Turkish businessmen who have billions of dollars of investments in Russia are seriously worried.

The final question will be who is most delighted with the Russia-Turkey tension. My answer is definitely IS.