Turkey gambles on the Turkmens

The Turkmen card Turkey is playing in Syria is likely to backfire and endanger the Turkmens. 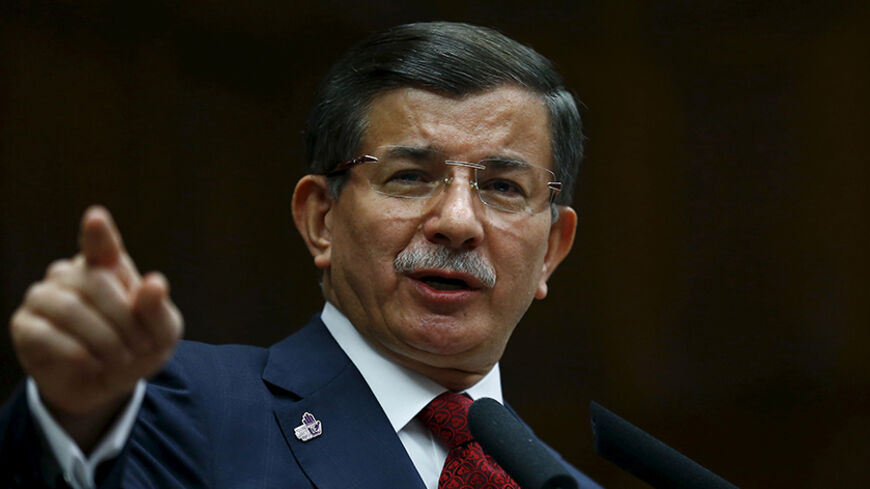 Turkey's Prime Minister Ahmet Davutoglu addresses members of parliament from his ruling Justice and Development Party during a meeting at the Turkish parliament in Ankara, Nov. 25, 2015. Davutoglu sent Russia a stern warning over its operations in Syria, saying attacks on Turkmens should not be carried out under the pretext of fighting the Islamic State. - REUTERS/Umit Bektas

The Syrian army’s gradual expansion of its operational area with Russian support and the United States' beefing up of the Kurdish-Arab-Syriac coalition (aka the Syrian Democratic Forces) are further restricting Turkey’s options in Syria.

Turkey has had problems supporting Salafi jihadists because of international reactions that shifted its calculations about Turkmens since the summer.

In response to the plans by the Kurdish People's Protection Units (YPG) to move westward and expel the Islamic State from Jarablus, Turkey has declared the Euphrates River a red line for the Kurds. Once it is cleared of IS, Turkey is planning to use the Turkmens to control both these areas and the Azez-Aleppo line, which is being considered for a buffer zone. Such plans naturally upped the value of the Turkmen card. Turkey, unable to prevent the Russian bombing against the groups supported by the West and the Gulf, has pushed back with the Turkmens.

But the Russians ignored the Turkish moves and expanded their operations to Turkmen Mountain.

Once it assumes the control of Turkmen Mountain with Russian air support, the Syrian army will score several significant points:

​Nearby Jabal Akrad (Kurdish Mountain) is as important as Turkmen Mountain. Jabal Akrad is currently controlled by Jabhat al-Nusra, Ahrar al-Sham and Ansar al-Sham, which frequently launch joint operations with the Turkmens.

Although the technical reason for shooting down the Russian plane was an airspace violation, the real reason is the risk of losing the logistical corridor — the area now controlled by the opposition groups — and the increasing possibility of losing control of the entire liberated zone.

Over the past few weeks the Syrian army has recaptured Qatil Maaf, Firinlik, Acisu and Kizildag north of Turkmen Mountain and Gimam, Sawanli, Zuwaik, Deir Khan and Toros to its south. Kizildag changed hands several times. If the regime can capture Kizildag, it will be easy for it to control 17 Turkmen villages in the area.

Turkey attaches strategic importance to dominating this area and is counting on Turkmens to confront IS in rural Aleppo. The Turkmens’ capture of Harcele and Delha was the result of this plan.

But many wonder how strong Ankara’s Turkmen card is and how effective it will be. A little background may help in understanding the situation:

When the Syrian uprising began in 2011, the Syrian Turkmens began organizing in the civilian and military spheres with Turkey’s support. Until then, Turkmens, who generally lived in villages and worked in agriculture, were not a politicized and organized community. Turkmens in the villages of Homs, Latakia, Damascus, Raqqa, Hama, Idlib and Daraa did not have an urban base, in contrast to the Kurds, who controlled Qamishli. It was the Turkmens who had settled in Turkey and pioneered post-2011 efforts to create a political movement with a diaspora flavor. The first organization that emerged in 2011 was the Syrian Turkmen Movement, which tried to get the Turkmens to take to the streets to protest the regime. Next, 180 Turkmens living in Turkey established the Union of Syria Turkmens. These two organizations united in November 2011 under the Syrian Turkmen Mass (STK) to boost their representation capacity. But they eventually split and the Democratic Turkmen Movement of Syria (SDTH) was set up in March 2012.

The SDTH has been more active in Aleppo, while the STK focuses on Bayirbucak. STK activities are run from offices in Turkish border provinces. Their activities in Latakia are being directed from Yayladag, Raqqa from Akcakale and Aleppo from Gaziantep. Under the strong influence of Turkey, the Syrian National Council allotted 16 seats to Turkmens while the Syrian National Coalition offered them three seats.

In addition to the two main Turkmen groups, some influential Turkmens living in Turkey formed the Syrian Turkmens Platform. The platform working under the tutelage of the Turkish Foreign Ministry pioneered the creation of the Syrian Turkmen Assembly that sought to unify the Turkmens.

On Dec. 15, 2012, the then-speaker of Turkey’s parliament, Cemil Cicek, and then-Foreign Minister Ahmet Davutoglu attended the unification meeting in Istanbul. The Turkmen Assembly was officially established in a March 2013 meeting attended by then-Prime Minister Recep Tayyip Erdogan and Davutoglu. In the second session of the assembly, held in Ankara May 9-10, 2014, a 42-person legislative assembly and 13-person executive council were elected from among some 350 delegates. The Turkish parliament recognized the Turkmen Assembly as the legitimate representative of Turkmens.

As for the military activities of the Turkmens, many armed units were set up after 2012. Turkmen units participated in the Anfal operation on March 21, 2014, by jihadist groups to capture the Armenian towns of Kasab and Samra.

In operations on Aug. 4-19, 2013, Alevi villages were raided and some 200 civilians were killed. IS and Jabhat al-Nusra also joined Turkmens in these attacks. Meanwhile, there was regular rocket fire from Turkmen Mountain toward Latakia.

Turkmens who were suspected of being the “legacy of the Ottomans” when Syria was first created threw themselves into the ring of fire by participating in the armed resistance under the guidance of Turkey.

Apart from some who came to Turkey to study and then to settle down, Turkmens never had strong political ties with Turkey. The Turkish government was more concerned with the Turkmens of Kirkuk and Mosul in Iraq than with the Syrian Turkmens. But after abandoning Iraqi Turkmens to IS, Turkey decided that Syrian Turkmens could be useful and set up close ties with the Turkmens concentrated in the Baba Amr neighborhood of Homs, considered the capital of the revolution.

Should the Syrian army impose its control on the region, Syrian Turkmens will face the danger of being identified as Turkey's “fifth column,” with all that label implies. Moreover, Turkey’s game plan of placing Turkmens as a barrier to the Kurdish YPG is also planting the seeds of enmity between the Kurds and Turkmens.