Many argue that Ankara’s prime motive in signing the accord is to improve strained ties with Washington. 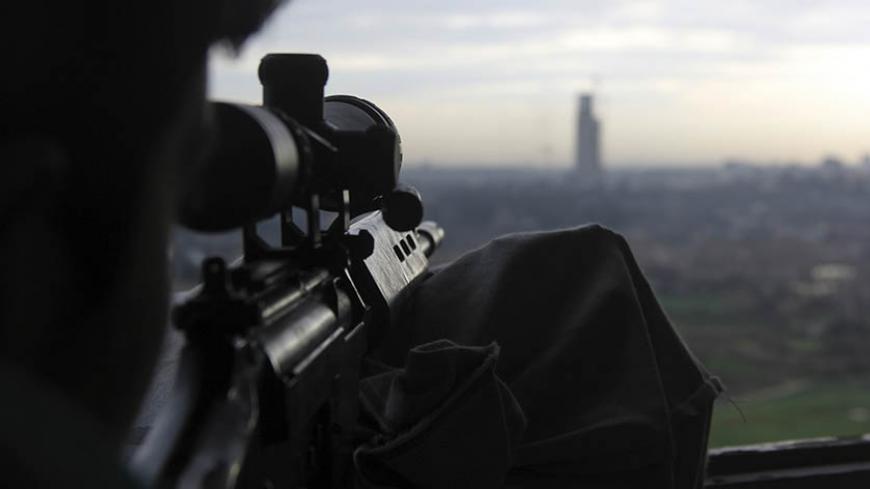 A rebel fighter aims his weapon at an area controlled by forces loyal to Syria's President Bashar al-Assad, from a rebel-controlled area in the northwestern Homs district of Al Waer, Feb. 18, 2015. - REUTERS

Following months of delay and speculation, Turkey and the United States have finally signed an agreement to train and equip moderate Syrian fighters whose prime objective, according to Washington, will be to fight the Islamic State (IS).

Few details of the accord have been released, though, raising fresh questions about the undertaking. There are also signs that Ankara and Washington are not in full agreement about the objectives of the program.

Given its reluctance to date to get involved actively against IS, there are also questions as to why Turkey decided to participate in a program that, contrary to its expectations, does not involve the targeting of the Bashar al-Assad regime by the United States.

Many argue this is essentially a fence-mending effort by Ankara, given its current frosty ties with Washington due to differences over Syria, Egypt and Libya. Remarks by Foreign Ministry Undersecretary Feridun Sinirlioglu, who signed the accord for Turkey on Feb. 19, also reinforce this view.

Sinirlioglu said the accord was an “important step taken within the context of the strategic partnership between the two countries,” and added, “This is only the first step. We still have much to do.”

US Ambassador John Bass signed the agreement on behalf of the United States. Despite the need for urgency, given advances by IS in Syria, the signing comes months after the US Congress authorized the program in September. It is still not clear, though, when the program, which Saudi Arabia and Qatar will also participate in, will begin.

While Turkish Foreign Minister Mevlut Cavusoglu said it will begin “in the first days of March,” Pentagon spokesman Maj. James Brindle told Today's Zaman that the program was expected to begin "in the coming months."

The little amount of information provided to the media indicates that 400 Syrian fighters will initially be trained in Turkey by 20 to 30 members of the US special operations forces in a camp in the central Anatolian province of Kirsehir. Their equipment will be provided by the United States. The fighters to be trained will be selected from among moderate members of the Free Syrian Army (FSA).

Washington has also reportedly assured Ankara that members of the Kurdistan Workers Party, or related Kurdish groups in Syria that are currently allied with the US-led coalition against IS but are designated as terrorist organizations by Turkey, will not be selected for training.

The key problem between Ankara and Washington concerning the objectives of this program emerged almost immediately in a statement by Cavusoglu when he was answering questions put to him by reporters in Ankara on Feb. 20.

"The aim of the program is to ensure a political transition and strengthen the opposition in their fight against threats such as extremism, terrorism and all elements that pose a threat to the opposition, including from the regime [of Assad]," Cavusoglu said. He refused to go into more detail, saying this would be provided later.

Cavusoglu’s attempt to broaden the program’s scope to include the Assad regime as a target is at odds with Washington’s position on the matter. A statement by Pentagon spokesman Rear Adm. John Kirby a day before the accord was signed made it clear that fighting IS would be the sole objective of the program.

“Everything that we've done inside Syria has been aimed at that group and that group only,” Kirby said in response to a question. “The fight is against [IS] and [IS] only as far as the coalition is concerned,” he added when pressed.

President Recep Tayyip Erdogan and Prime Minister Ahmet Davutoglu have made regime change in Syria a key foreign policy objective and continue to push for this.

They have been highly critical of the US-led coalition for prioritizing the fight against IS instead of fighting the Assad regime.

Washington and its Western allies, however, remain focused on IS, especially after the recent attacks in Paris and Copenhagen. Washington’s regional allies Jordan and Egypt, with support from Saudi Arabia and the United Arab Emirates, have also increased their role in the fight against IS following the brutal murder by the group of a downed Jordanian pilot, and 21 Egyptian Coptic Christians.

These developments go against the grain as far as Ankara’s efforts at trying to keep the attention on the Assad regime are concerned. Supporters of Erdogan and Davutoglu’s Syrian policy are also unhappy that the program to train and equip members of the Syrian opposition does not have Assad in its cross-hairs.

Ufuk Ulutas, the director of the foreign policy section at the Ankara-based Foundation for Political, Economic and Social Research (SETA), for example, is among those who believe that sending 5,000 US-trained “Rambos” into Syria after five years of inaction against Assad is too little, too late, and will not produce any results.

“The second and much more important point is that the 5,000 people (reportedly to be trained overall under this program) will not be trained against the Syrian regime, but to fight IS. The authorization by the US Congress makes this very clear,” Ulutas said in an article on the topic.

Ulutas’ remarks not only reveal a disappointment that Assad is not the target, but also show that government supporters are not convinced by the claim that the Syrian regime will be one of the targets of those trained and equipped under this program.

Not everyone agrees, however, that the program is “too little, too late,” or that making IS the main priority is wrong. Pointing out that the fight against IS will be a long, drawn-out affair, retired Maj. Gen. Armagan Kuloglu believes a well-trained and equipped crack force can be effective against this group in the long run.

“Because of its actions, the fight against IS has justifiably become the main priority now,” Kuloglu told Al-Monitor. “This group is much more effective and dangerous than al-Qaeda, and has shown that it is able to field significant military forces, rather than merely carrying out acts of terror,” he added.

Kuloglu, currently a military analyst with the Ankara-based 21st Century Turkey Institute, is also aware that training and equipping fighters from the FSA will make Turkey a target for IS. He underlined the need for increased vigilance now against IS cells in the country.

“This accord will also contribute to improving Turkey’s strained ties with Washington and show that it remains part of the Western world,” Kuloglu said.

Faruk Logoglu, who served as Turkey’s ambassador in Washington from 2001-2005, believes that improving Turkey’s ties with the United States is the main reason why Ankara decided to sign this accord.

Seconding remarks of Robert Ford, the former US ambassador to Syria, Logoglu said he doubts that the program will be effective because it will take time to become operative.

“It is also not clear who is with whom, and who is fighting whom at this stage in Syria,” Logoglu told Al-Monitor, adding that signing this agreement under these circumstances provided further proof of the government’s mistaken and confused Syria policy.

The effort to mend fences with Washington — which clearly is why many believe Ankara is getting involved in the train-and-equip program — is unlikely to be popular among the government’s grass-roots supporters, whose anti-Western sentiments are often fostered by Erdogan’s frequent angry remarks aimed at the West.

Whatever its merits or demerits, signing the agreement to train and equip moderate members of the Syrian opposition, and then claiming this also targets the Syrian regime — when that is not the intention of the US-led coalition — only reinforces the impression that the government’s Syrian policies, not to mention policies on other regional issues, are in a daze.