Ankara wants to set up three cities for refugees on the Syrian side of the border with EU funds, but suspicions linger about its true intentions. 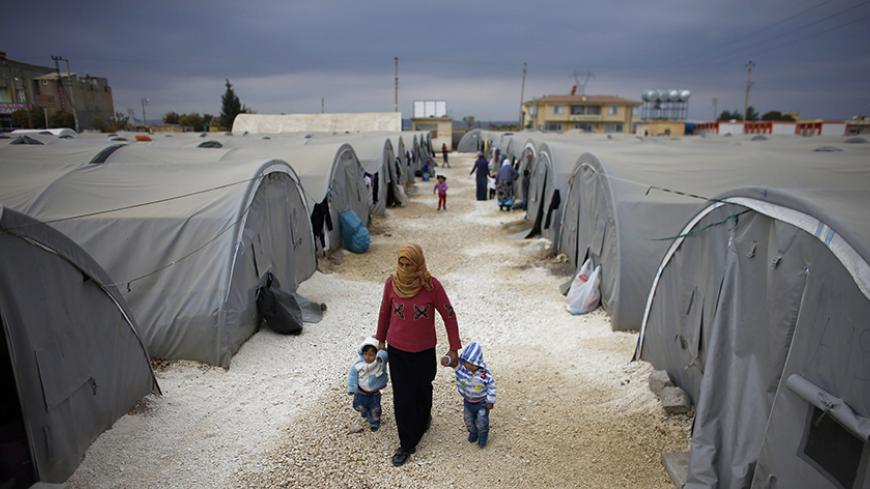 A Kurdish refugee woman from the Syrian town of Kobani walks with her children at a refugee camp in the border town of Suruc, Sanliurfa province, Nov. 17, 2014. - REUTERS/Osman Orsal

Talking to reporters in New York over the weekend prior to addressing the UN General Assembly, Turkish Prime Minister Ahmet Davutoglu made remarks that clearly indicated Ankara is not on the verge of a major policy change on Syria, despite recent speculation to that effect. His statements also suggested that Turkey will remain at odds with Washington and Moscow over priorities in Syria and how to proceed with regard to the future of President Bashar al-Assad.

Davutoglu also admitted, in effect, why Turkey had decided to take part in US-led airstrikes against the Islamic State (IS), using words that indicate that Ankara’s thinking had more to do with preventing further advances by the Syrian Kurds than with fighting IS.

Davutoglu also clarified Ankara’s position on whether Assad has any role to play in a settlement. A recent remark by Turkish President Recep Tayyip Erdogan following his talks with Russian President Vladimir Putin in Moscow were taken as a sign that Ankara may be changing tack in this regard.

“We can have a process without Assad, or something like going with Assad during a transition period,” Erdogan told reporters in Istanbul when asked about his discussion with Putin on Sept. 23.

Davutoglu repeated Ankara’s demand that Assad be kept out of any negotiations. This was not a rare moment of disagreement between Erdogan and Davutoglu, since Erdogan had also back-paddled on this issue by then, underlining the fact that Ankara’s position on the Syrian leader has not changed.

Davutoglu’s overall remarks about Syria, nevertheless, showed that his government will continue chasing what many at this stage believe are pipe dreams. A case in point was his call on the European Union to finance a plan by Turkey to set up three cities in a safe zone to be declared in northern Syria, adjacent to Turkey, to house Syrian refugees.

The People's Protection Units (YPG), the armed wing of the Democratic Union Party (PYD) — which has become the umbrella organization of Syrian groups — is poised to capture the region Davutoglu referred to from IS, according to reports in the international press.

Turkey says the PYD and YPG are terrorist organizations affiliated with the outlawed Kurdistan Workers Party (PKK). Washington has also declared the PKK a terrorist group, but has made clear it has no intention of doing the same for the PYD or YPG.

The prospects of the Kurds gaining a contiguous region in northern Syria along the Turkish border that also has access to northern Iraq is a nightmare scenario for Ankara, given its large and restive Kurdish minority. Turkey has been accused of trying to prevent this development by assisting radical Islamic groups against the Syrian Kurds.

Ankara’s failure to assist the Kurds besieged by IS in Kobani last year not only agitated its own Kurds, but also cost much in terms of international sympathy for Erdogan, whose pronouncements at the time were considered anti-Kurdish.

Much to Ankara’s annoyance, the PYD and PYG have become key allies of the US-led coalition, providing them with much-needed ground forces against IS and displaying their military capabilities. Few diplomats believe that Washington will give up on the Syrian Kurds at this stage in deference to Turkey, especially when doubts continue to linger about Turkey’s true intentions in Syria.

The following is what Davutoglu told reporters in New York, and a brief analysis of his remarks:

“The PYD gets its arms and human resources from the PKK in the Qandil Mountains in Iraq, and there is interaction among them. It is also in competition with [Iraqi Kurdish leader] Massoud Barzani and is trying to establish a region for itself. We spoiled this game by our decision to mount operations on July 23, and joined the coalition against [IS]. By mounting operations against [IS] and the PKK at the same time, we also prevented the PKK from legitimizing itself. Until the PYD changes its stance, we will continue to see it in the same way that we see the PKK.”

These remarks by Davutoglu reinforce the belief in Turkey and abroad that Ankara joined the fight against IS not because of the massacre perpetrated by this group in July in the Turkish town of Suruc, but to use the cover of these operations to upset the PYD’s plans.

Davutoglu also admitted in this way that another aim was to prevent the PKK from raising its profile in Western eyes with its contributions against IS. These remarks will increase doubts about Turkey’s determination to fight IS. Such doubts are already prevalent because of the large number of airstrikes by Turkish jets against PKK targets in Iraq, contrasting sharply with the relatively few operations it has participated in against IS.

“We told Europe that Turkey will not become a concentration camp. We have the capacity to establish three container cities to house 100,000 people each, or even lasting cities in the region between Jarablus and Azaz. The EU can bear the cost while we do the building.”

Davutoglu is in effect repeating Turkey’s call for a safe zone to be established in the area, with the new idea of building three cities there. He is clearly trying to capitalize on the refugee pressure on Europe to recruit EU support for this project.

Western countries, while paying some lip service to Turkey’s call for a safe zone, have so far made it clear they will not participate in establishing this zone or provide the boots on the ground necessary to protect it. Meanwhile, Russia remains strongly opposed to the idea, arguing that it violates Syrian sovereignty. It is not clear how Ankara hopes to succeed in this project, given Western reluctance and Russia’s opposition.

Davutoglu’s remarks are also likely to feed suspicions that Turkey’s main aim here is to prevent the Syrian Kurds from gaining this territory. It is clear, however, that if Ankara can sell this idea to the international community, it would also alleviate Turkey’s refugee problem. But the whole question remains a moot point for now.

“We will accept anything the Syrians accept, but it is not possible for the Syrians to accept a settlement that includes Assad. We have decided that a settlement with Assad will not work and are maintaining our position on this. [IS'] presence is helping Assad, and Assad’s presence is helping [IS]. Russia’s decision to establish an air force unit to help Assad and to provide assistance in other ways is also a source of concern.”

These remarks show that Turkey is not prepared at this stage to change its position on Syria and come more in line with what Moscow and Washington are saying. Turkey has already made known its concerns about Secretary of State John Kerry’s recent remarks, in which he indicated that Assad’s departure was not an immediate precondition for a settlement in Syria.

The problem for Turkey, however, is that it is insisting on maintaining a policy that has not only accomplished little to date but has also failed to prevent things it does not want to see emerge in Syria. Analysts point out that Ankara is refusing to recalibrate its Syria policy even though it has no say over developments, or the necessary power to achieve the results it wants.

Soli Ozel, a lecturer in international relations at Istanbul’s Kadir Has University and a columnist for Haberturk, characterizes Turkey’s overall Middle East policy as a “fiasco.” He believes that Ankara’s failure to accept reality, continuing instead to insist on failed positions as if they had any value left, is actually a cover to shroud its helplessness in the face of developments it cannot control.

“It is clear that the Davutoglu government has lost its compass in Syria at a time when the world is searching for alternative means to solve the crisis. What is worrying is that Ankara repeats its failed positions at important international forums, even though it has no capacity to make others listen or to get them to help it alter the course of events,” Ozel told Al-Monitor.