Despite Ankara’s dissatisfaction over suggestions that Syrian President Bashar al-Assad has to be part of a settlement, experts say there is little Turkey can do to alter the course of events. 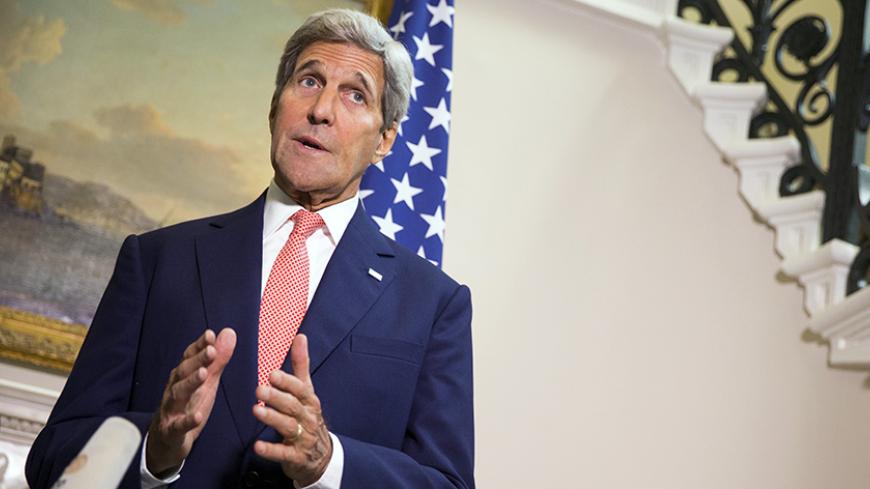 US Secretary of State John Kerry (R) answers a question about the ongoing crisis in Syria during a news conference with British Foreign Secretary Philip Hammond in London, Sept. 19, 2015. - REUTERS/Evan Vucci

Turkey’s lack of diplomatic clout in Syria is becoming more glaring as the crisis moves toward a new trajectory, which includes the highly unsavory prospect for Turkish President Recep Tayyip Erdogan and Prime Minister Ahmet Davutoglu of a role for Syrian President Bashar al-Assad in efforts to settle the crisis.

Ankara’s failure to consider the historic “Russian factor” has proved to be the main rock that Erdogan and Davutoglu’s Syrian plans foundered on, as Moscow remains resolute in supporting Assad, and is increasing its military support for his regime.

Turkey can also do little now but look on as Washington grapples with the notion of including Assad in any Syrian settlement. Bloody-handed dictator he might be, but Assad — much to Ankara’s annoyance — is emerging as the lesser evil for the West, which is more concerned about the rise of the Islamic State (IS) in Syria and Iraq.

US Secretary of State John Kerry broached the subject in London last week, during a press conference with Philip Hammond, his British counterpart. "For the last year and a half we have said Assad has to go, but how long and what the modality is … that's a decision that has to be made in the context of the Geneva process and negotiation," Kerry said.

He added, "It doesn't have to be on day one or month one … there is a process by which all the parties have to come together and reach an understanding of how this can best be achieved."

Reports by Al-Monitor’s congressional correspondent Julian Pecquet also indicate a change in mood in the US Congress. Following a Sept. 16 Senate discussion on Syria, Pecquet indicated that a growing number of Democratic lawmakers are questioning whether toppling Assad should still remain a priority as IS continues to make steady gains.

Influential papers are also floating the same idea, a case in point being the opinion piece in the Financial Times on Sept. 21 by Gideon Rahman. “The overriding goal must be to end the war and to persuade outside forces to back a peace settlement, rather than fueling the conflict. A diplomatic solution clearly has to involve the regime and, almost certainly, President Bashar al-Assad,” Rahman wrote.

These views do not sit well with the Turkish government. Foreign Minister Feridun Sinirlioglu made this amply clear Sept. 20 during a press conference in Ankara with his Austrian counterpart Sebastian Kurz when asked to comment on Kerry’s remarks.

“Assad is the basic reason for this crisis. A ruthless dictator who has declared war on his own people cannot be part of any political settlement in any way,” Sinirlioglu said. His remarks show there is no change in Ankara’s basic position.

The problem for Turkey is that few are listening to what it has to say on Syria at this stage. A series of miscalculations by Ankara regarding Assad’s survivability, and suspicions that the Justice and Development Party is pursuing its own Islamist agenda in Syria have cost Turkey much credibility.

In a phone call with Kerry last week, Sinirlioglu reportedly repeated Turkey’s demand for the establishment of a safe zone in northern Syria for refugees and moderate elements of the Syrian opposition.

But Ankara’s demand has largely fallen on deaf ears. The idea for such a zone has merely gained lip service from Turkey’s Western allies, which remain opposed to any suggestion of sending ground forces to Syria to provide the protection that a safe zone would require.

Russia opposes such a zone, maintaining this would be a violation of Syria’s sovereignty. The Ankara-based Center for Economic and Foreign Policy Studies indicates in its latest report on Syria that the increasing Russian military involvement in this conflict has ensured that the prospects for this zone are next to nil.

“The Turkish position of establishing safe zones in Syria has been rendered virtually impossible, as going forward with such a plan and foregoing working together with Russia would risk engagements with Russian assets and defenses over Syrian skies and potential Russian casualties,” the report said.

Sinirlioglu met with Russian Foreign Minister Sergey Lavrov in the Russian Black Sea resort of Sochi last week for discussions that also covered Syria, but clearly made little headway in convincing his Russian colleague. Remarks by Lavrov to reporters after the talks showed again that Russia is unlikely to change its position on Syria.

“We see no reason not to cooperate with the regime in Damascus against terrorism. Besides, Syrian President Assad — as the commander in chief of his armies — remains the most effective force against terrorism,” Lavrov said. “Not cooperating with the Syrian regime amounts to chasing pipe dreams.”

Lavrov said countries concerned with Syria face two choices: “The first is to sit back and wait for the utopia of seeing the Assad administration toppled, which no one believes in anymore. The second is to engage in realistic and honest cooperation to save this historic region."

Erdogan was due to meet Russian President Vladimir Putin in Moscow on Sept. 23, but few expected him to convince Putin about the need to keep Assad out of any Syria settlement.

Another problem for Turkey is that it has still not fully convinced the United States and its other allies that it is committed to fighting IS, despite having opened up its bases to the US-led coalition for this purpose.

All of Turkey’s energy is currently concentrated on fighting the Kurdistan Workers Party (PKK) at home and in Iraq, and on trying to keep the Democratic Union Party (PYD), which has become the umbrella group for Syrian Kurds, from securing more gains along Turkey’s borders with Syria.

Ankara considers the PYD and its military wing, the People's Protection Units (YPG), as PKK extensions and has listed them as terrorist organizations. Washington has also listed the PKK as a terrorist group, but refuses to do the same for the PYD and YPG, which are its allies against IS.

Turkey’s call for a safe zone in northern Syria has also stirred the suspicion that this is merely a shrouded attempt to ensure the Syrian Kurds do not secure a contiguous area for themselves on the other side of the Turkish border.

Turkey’s attempts to drive a wedge between Washington and its PYD and YPG allies — and to get these groups listed as terrorist organizations — has failed thus far. This became apparent again Sept. 21 during State Department spokesman John Kirby’s daily press briefing in Washington.

“We don’t consider the YPG a terrorist organization, and they have proven successful against [IS] inside Syria. And as I said, we’re going to continue to work with counter-[IS] fighters who are and can be successful against this group,” Kirby said in response to a question on the topic.

Retired Ambassador Ali Tuygan, who is also a former undersecretary for the Foreign Ministry, and is acting currently as an analyst on foreign policy issues, is among those who believe Assad will most likely be part of any solution in Syria.

Tuygan said that IS remains one of Russia’s prime concerns in Syria, given reports of thousands of Chechen fighters among its ranks, and thinks this could push Washington and Moscow closer in the search for a settlement to the Syrian crisis.

“Turkey’s position appears unchanged in light of the latest statements. But if the US and Russia decide to meet halfway over Syria and cooperate for a solution, Turkey will have no choice but to accept the outcome, whatever it is,” Tuygan said.

The bottom line is that Turkey is not only seriously out of tune with Moscow over Syria, but now risks the same with Washington. It is not, however, in a position to alter the course of events, which continue to move in the direction least desired by Ankara.