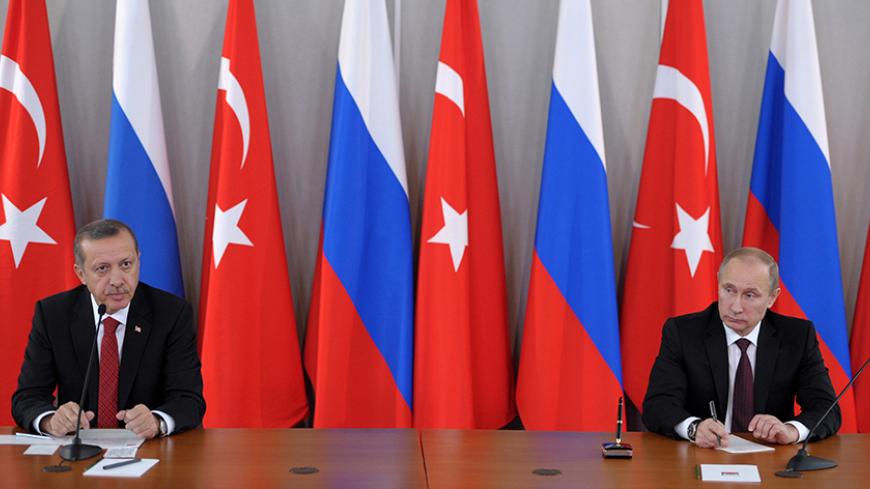 Russia’s latest military moves in Syria — which include renovating and expanding the airport at Latakia, the dispatch of hundreds of military advisers to train regime forces and the supply of advanced weaponry to the Syrian army — have compounded Turkey’s frustration with this ongoing crisis. Moscow's activities, details of which can be found in Fehim Tastekin's Sept. 11 article for Al-Monitor, represent another spanner in the works thwarting Turkey’s desire to see the earliest possible demise of Bashar al-Assad and his regime.

As Tastekin notes, Russia’s moves may have also sounded the death knell for what little hope there had been for the establishment of the “safe zone” Turkey wants to establish along its border with Syria. Ankara says the zone will be allocated for refugees as well as moderate groups fighting the Assad regime. Moscow argues that such a zone would violate Syrian sovereignty. The issue remains academic at this stage, however. The establishment of a safe zone has only received tenuous support from the United States and Turkey’s other NATO allies, which have not shown any interest in supplying the ground forces necessary to protect it.

The broader issue concerns Moscow’s determination to continue supporting Assad, which is thwarting Ankara’s plans for the future of Syria. Ulrich Speck of the German Marshall Front argues that Moscow's loss of ground in Ukraine is increasing its determination to ensure that the same does not happen in Syria.

Although displeased with the recent turn of events, Ankara’s ability to put pressure on Moscow in regard to Syria is extremely limited. Turkey’s vast economic stakes in Russia and its strategic cooperation in the energy field also serve as brakes.

Despite serious disagreements with Moscow on a score of issues, ranging from the Cyprus issue and the Crimea Peninsula to the Armenian question and Syria, Ankara and Moscow have always chosen to “compartmentalize” their relationship. This has ensured that differences on specific issues, no matter how serious they might be, do not endanger their broader mutual interest. In addition, Turkey has always had to factor in Russia’s superpower status.

Ankara’s overall stance remains the same. It might be annoyed by the latest Russian moves in Syria, but it has not openly criticized them. The only concrete sign of Turkey’s displeasure appeared in a Sept. 15 news item in the daily Hurriyet, which cited unnamed officials saying that Turkey had conveyed to Moscow, “in various ways,” that it was making the already intractable situation in Syria worse.

Hurriyet also quoted the same sources as indicating that some bilateral contacts between the two countries could be postponed as an expression of Turkish displeasure. This apparently does not include the visit to Sochi by Foreign Minister Feridun Sinirlioglu that, according to the Turkish Embassy in Moscow, will take place Sept. 17.

Sinirlioglu’s talks with his Russian counterpart, Sergey Lavrov, will reportedly include Syria. Sinirlioglu will undoubtedly voice Turkey’s concerns about Russia's moves, but no one expects the topic to dominate the talks because the sides remain resolute in their Syrian policies. Turkey’s weak position with regard to Russia is nevertheless apparent. Its inability to influence matters in Syria contrasts sharply with Russia not only being a staunch Assad supporter, but also a key player that will have a major say in the future of Syria.

Ozdem Sanberk, retired ambassador and head of the Ankara-based International Strategic Research Organization, believes Turkey’s current position is untenable and therefore requires that Prime Minister Ahmet Davutoglu overhaul Ankara’s Syrian policy. “The latest steps by Russia in Syria represent a new headache for Turkey and show that it is not possible for it to continue with the policy it has tried to pursue from the start of the crisis,” Sanberk told Al-Monitor. “These steps by Russia consolidate Turkey’s impasse and highlight the need for a new assessment of the overall situation in Syria.”

Turkey says it wants a centrally administered Syria run by a democratically elected government. It is no secret, however, that what President Recep Tayyip Erdogan ideally wants is a government based on Syrian demographics, which translates into a Sunni-majority administration. Russia, not to mention Iran, is determined to prevent this and is pushing for a political settlement that involves negotiations with Assad or his representatives. Meanwhile, the West appears to be of two minds about Assad.

Sanberk remarked, “There is no real unity in the West with regard to Assad. Many fear what will replace him if he and his regime should fall abruptly. The US says it wants a political solution, but insists there is no place for Assad. But it is still worried about what comes after him. At any rate, it is unlikely that Russia will desert Assad.”

He also stated, “Russia is much more certain of what it is doing in Syria than the West is and has been consistent in this regard from the start.” He said Russia not only wants to maintain its strategic foothold in the eastern Mediterranean, but more important, is signaling that it will not be brushed aside as the new global balance of power for the 21st century takes shape. “It wants to co-manage emerging situations in the 21st century. It has set goals in this regard and is pursuing them with predictability and consistency,” said Sanberk.

With its one-dimensional approach to Syria, Ankara also appears unprepared for its ultimate nightmare — the likelihood of Syria being split into three regions: one controlled by the Russian- and Iranian-backed Assad regime, one along Turkey's border controlled by Kurds and another along the Turkish border controlled by radical Islamists. Turkey continues to refuse to have a dialogue with the Syrian Kurds. It is also unlikely to contact the Assad regime anytime soon. With a view toward gaining some influence in the region, this only leaves Ankara with the risky prospect of overt or covert contacts with radical Islamic groups like Jabhat al-Nusra.

In an interview with Al-Monitor in May 2014, Lakhdar Brahimi, the former joint UN-Arab League special envoy for Syria, argued that the Russians were right at the beginning when they said that Syria is not Egypt or Tunisia and that Assad was not going to fall in a matter of two or three weeks. “Maybe if people listened to them, and went to them, and said, listen you clearly know the situation in Syria better than anybody else. Let’s sit down and see how we can help Syria solve its problems. Perhaps things would have been different. But that did not happen,” Brahimi said.

The period Brahimi is referring to was also the time when Davutoglu, then foreign minister, was highly optimistic about Turkey’s “pre-eminent role” in the Middle East. Even today, Davutoglu harks back to his meeting with Assad in Damascus in 2011, recalling how he spent six hours trying desperately to convince the Syrian leader to make democratic reforms and avert crisis in his country. Looking back, Davutoglu’s assessment of Turkey’s position in the region appears overly ambitious and his advice to Assad excessively naive given the deep sectarian fault lines in that country and the bloodshed they have caused in the past.

In hindsight, one cannot help feeling that rather than doing all the talking, Davutoglu should have perhaps done some listening as well. He might have also lent an ear to what was coming out of Moscow at the time, which given its strategic ties to Damascus stretching back to the Cold War clearly knew more about Syria than he did.

What is more than apparent in retrospect is that Ankara never considered the Russian factor at the start of the Syrian civil war. It continues to pay for this mistake.