Ankara is trying to regain its lost influence over Syria with a radical change in policy, but its past mistakes make that a difficult challenge. 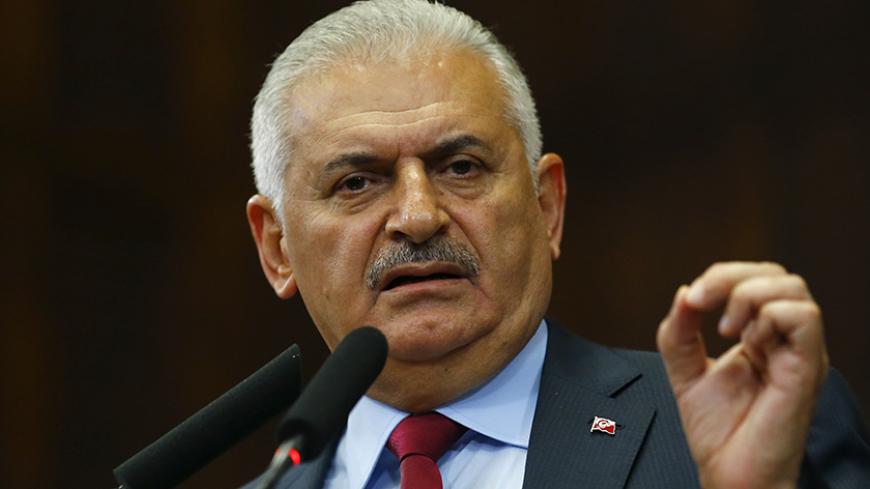 Turkey's Prime Minister Binali Yildrim addresses members of parliament from his ruling Justice and Development Party during a meeting at the Turkish parliament in Ankara, July 19, 2016. - REUTERS/Umit Bektas

Months of speculation about Turkey inching toward a radical change in its Syrian policy have finally ended. On Aug. 20, Prime Minister Binali Yildirim officially announced Ankara’s new policy, which aims to settle the crisis with the involvement of all the key players, including Syrian President Bashar al-Assad. This about-face had been in the making since Turkish President Recep Tayyip Erdogan hinted a year ago that a transition period in Syria could include Assad. Prior to that, Ankara had taken the hard-line position that there was no room for Assad in any shape or form in Syria's future.

Erdogan made his remarks last September, a day after holding talks with Russian President Vladimir Putin in Moscow. That was two months before Turkey downed a Russian fighter jet that had strayed into Turkish airspace — a charge denied by Moscow — while on a bombing mission against anti-regime forces supported by Ankara in Syria. The incident further reduced what little remaining influence Turkey had over Syria following a series of policy mistakes.

Turkey’s resetting of its Syria policy comes on the heels of its reconciliation with Russia earlier this month. The radical change in Ankara’s approach also follows a decision to improve ties with Iran and to initiate a new dialogue on Syria with Moscow and Tehran.

The Yildirim government is also acknowledging that Ankara’s former policy was out of touch with the reality in Syria. Deputy Prime Minister Numan Kurtulmus was quoted extensively after telling a group of reporters and academics that all of Turkey’s present troubles were rooted in Syria. “Much of what has befallen us is the result of the situation in Syria and our Syria policy,” Kurtulmus said during the Aug. 17 meeting. “This applies to others too, but we were also unable to put forward a valid policy [on Syria].”

The Islamist supporters of Erdogan and the ruling Justice and Development Party (AKP) are unlikely to be happy with this turn of events given the extent to which Assad was systematically demonized in Turkey. They have already had to swallow a bitter pill with Turkey’s decision to reconcile with Israel. There is also, however, a new sense of realism among these supporters.

Akif Emre, a well-known Islamist columnist from the pro-government daily Yeni Safak, for example, argued that the bloody situation in Syria, and the major headache this poses for Turkey, has to be addressed above all other considerations. “Stopping the bloodshed and the tragedy in Syria has taken precedence over whose position will be politically vindicated by any settlement, especially when the urgent need for a settlement is no longer just Syria’s internal affair, but also concerns Turkey directly,” Emre wrote. Overlooking that it was Russia and Iran that ultimately undermined Ankara’s initial Syria policy, Emre added that cooperating with Russia and Iran on Syria would also give Turkey leverage over the West.

It is also interesting to note that Yildirim spelled out Turkey’s new Syria policy on the very day that the Turkish parliament endorsed the reconciliation deal with Israel. Yildirim told a group of foreign reporters Aug. 20, “No one should be surprised if new and noteworthy developments are seen with regard to Syria over the next six months.”

He added that Turkey would be much more active over this period, to ensure that the threat from Syria does not increase, and went on to list the key elements of Ankara’s new policy as follows:

Yildirim’s most striking remarks, however, concerned Assad. “The United States and Russia also know that in the long run it does not seem possible for Assad to be a unifying factor,” he said, adding, however, “Whether we like it or not, Assad is one of the actors.” Yildirim’s words spelled the definitive end of Erdogan and the AKP’s initial dream of elections in Syria that would propel the majority Sunnis to power under a government led by the Muslim Brotherhood.

Fehmi Koru, a seasoned conservative commentator, believes that the cadres that crafted Ankara’s failed Syria policy seriously underestimated Assad. “They got bogged down in one aspect of the Baathist regime of 40 years standing [namely, the fact that it was a Nusairi/Alawite structure that excluded Sunnis] and overlooked the fact that [Assad] had over the years gained a status over and above ethnic and sectarian divisions,” Koru wrote in his widely read blog. “Influenced by this outlook, our foreign policy was based on the assumption that the Assad regime would not survive long and a regime close to Turkey could come to power in Damascus.”

Washington’s subsequent alliance with the Syrian Kurds against the Islamic State (IS) and the advances by the Kurds in northern Syria also set off alarm bells in Ankara, where the notion of an autonomous Kurdish entity along the Turkish border is anathema. The news that regime forces have started fighting the military wing of the Democratic Union Party (PYD) — previously accused by Turkey of being allied with Assad — in the city of Hasakah also makes the about-face on Assad a little more palatable for Ankara.

Yildirim appeared to hint at this during his meeting with foreign journalists when he said, “It is apparent that the regime has also understood that the Kurdish entity trying to be established in the north is a threat to Syria.”

Turkey says the PYD is a terrorist organization because of its links to the outlawed Kurdistan Workers Party (PKK). Washington considers the PKK a terrorist group but refuses to designate the PYD as such, which is a major sticking point between Turkey and the United States. Russia has also allied itself with the PYD, but Ankara’s reconciliation with Moscow and decision to cooperate more closely with Russia on Syria, as well as the evolving conflict between the PYD and the Assad regime, make this a lesser concern for Turkey than Washington’s ties with the Syrian Kurds.

The emergence of IS as a major threat to Turkey is also seen as one of the driving forces behind Ankara’s new Syria policy. Turkish officials are aware that the struggle with IS will require closer cooperation with global and regional powers.

Soli Ozel, from Kadir Has University in Istanbul and a foreign affairs commentator for daily Haberturk, believes that the change in policy should have been made three years ago, but was delayed due to the approach of Ahmet Davutoglu, first as foreign minister and later as prime minister.

“The downing of the Russian plane and the manner in which this left Turkey even more isolated was a wake-up call for Ankara,” Ozel told Al-Monitor. “Once Davutoglu was replaced [as prime minister] and Turkey decided to reconcile with Russia and improve ties with Iran, it was clear that its approach to Syria would also change.”

Ankara is clearly trying to regain lost influence in Syria with its new policy. Huseyin Bagci, from the International Relations Department at Ankara’s Middle East Technical University, believes it is too late, however.

“The steps being taken now regarding Syria do not alter the situation on the ground,” he told Al-Monitor. “Serious policy mistakes in the past have ensured that Turkey is merely a wagon attached to someone else’s locomotive, and not even a first-class wagon at that.”