How AKP supporters learned to live with Assad

Having vilified President Bashar al-Assad for years, President Erdogan and his supporters are backing off their previous threats against the Syrian president with the growth of Kurdish groups in Syria. 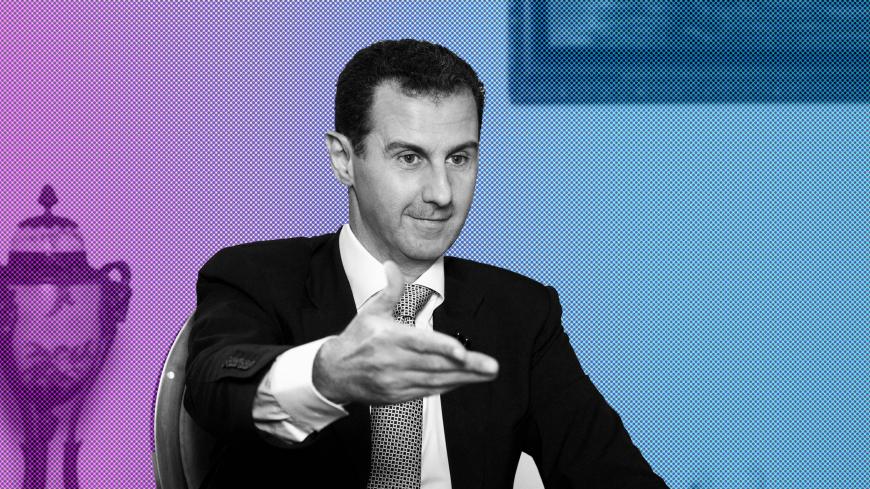 Many Turkish experts argued from the start that it was wrong for Ankara to turn against Syrian leader Bashar al-Assad the way it did after the Arab Spring. They said this policy disregarded ethnic and sectarian divisions in Syria, as well as the implications for Turkey if the central government lost its grip on the country.

Nevertheless, maintaining ties with Damascus was considered an abhorrent idea by the ruling Justice and Development Party (AKP) and its staunchly Islamist supporters at that stage. Ahmet Davutoglu — who as foreign minister at the time was the main architect of Ankara’s “moralistic” Syria policy — believed the demise of the “brutal dictator who kills his own people” was imminent.

“This will not take years, but months or weeks,” he said in August 2012 — a remark that has haunted him since.

The simple expectation of the AKP and its Islamist supporters was that with Assad gone, Syria’s majority Sunnis would sweep into power in any free elections held and form a Muslim Brotherhood-led government friendly to Turkey.

Meanwhile, the fact that Assad was already “a brutal dictator” when President Recep Tayyip Erdogan developed his “brotherly relations” with him prior to 2011 (when Erdogan was still prime minister) was conveniently overlooked.

Ankara was not perturbed by the past crimes of the Assad family either, including the massacre of Sunnis in the 1980s. Having good ties with Damascus was seen as a pragmatic necessity in those days.

It was only after March 2011 that the AKP crystallized its anti-Assad stance and burned all bridges with his regime. Davutoglu, however, never factored in the very distinct possibility that Assad might remain in power with backing from Russia and Iran, who were his close allies even then.

Today, Davutoglu — who became prime minister in the interim until Erdogan fired him in May 2016 — is gone, while Assad stands entrenched. After dismissing Davutoglu, Erdogan also toned down his vitriol against the Syrian leader to a great extent, mainly because of his dependence on ties with Moscow to counterbalance Turkey’s deteriorating ties with the West.

Erdogan was chastised by Russia in November 2016 when he said the ultimate aim of Turkey’s military incursion into northern Syria, under the code name Operation Euphrates Shield, was to “end the rule of the tyrant Assad.”

Following Moscow’s reprimand, he corrected himself, saying, “The aim of Operation Euphrates Shield is not to target any country or person but only terrorist organizations.”

The simple expectation of the AKP and its Islamist supporters was that with Assad gone, Syria’s majority Sunnis would sweep into power in any free elections held and form a Muslim Brotherhood-led government friendly to Turkey.

Meanwhile, Erdogan’s supporters in the media started gradually arguing that Turkey’s security needs require dialogue with Damascus. After Davutoglu’s dismissal, it became easier for them to lay the blame for Turkey’s failed Syria policies on Davutoglu.

Deputy Prime Minister Numan Kurtulmus’ remark some months ago that Turkey’s Syria policy was wrong from the start also eased the way for the dramatic about-turn some key Erdogan supporters are displaying now.

A case in point is Ibrahim Karagul, the editor of Yeni Safak — a paper known for its hard-line support of the AKP and devotion to Erdogan. Karagul considered Assad the devil incarnate in the past, but now — like many Erdogan supporters — sees the United States as the “the greatest threat to Turkey.” This, he says, makes it necessary to talk to Assad.

Referring to the US alliance in Syria with the People's Protection Units (YPG) against the Islamic State (IS), Karagul argued in his column recently that Washington was using this group to undermine Turkey. Ankara says the YPG is an offshoot of the outlawed Kurdistan Workers Party (PKK).

“We have to overcome our anger and free ourselves of our obsessions regarding the regime in Damascus,” Karagul wrote. “Otherwise, Syria will become America’s, the Syrians will be hostages, and Syria will turn into the staging ground for attacks against Turkey and Iran by Western armies.”

These loaded remarks reflect a prevalent belief in Turkey — including among government officials — that Washington is determined to hammer out an independent Kurdish entity hostile to Turkey in Syria.

Erdogan has himself encouraged remarks such as those uttered by Karagul. He suggested earlier this month that the real issue in Syria for the West was no longer to fight terrorism but to promote an agenda that threatens Turkey.

“It is patently clear that the issue in Syria has long surpassed the limits of combating a terrorist organization,” he told a gathering of supporters in the eastern Turkish city of Malatya.

Adding that Ankara would take “important steps” very soon, Erdogan said, “We are determined to push deeper the dagger we drove into the heart of the terrorist formation’s project in Syria with new advances.” He was referring to the YPG.

Erdogan’s remarks were taken to mean that Turkey would launch a new operation into Syria soon against the YPG in the city of Afrin, a stone’s throw from the Turkish border. That has not materialized yet, and it is not clear if it will.

Ankara’s problem is that it has to also contend with Russia and not just the United States in Syria. The Turkish operation against the YPG in April, which killed many members of the group, was equally condemned by Washington and Moscow.

Russia has also declared officially that it does recognize the YPG and PKK as terrorist groups, and it was the first to float the suggestion of regional autonomy for the Kurds in Syria. All of this compounds Turkey’s dilemma.

Ankara, however, remains largely in denial regarding the Russian position and instead — due to its multiple grievances with the West — prefers to reserve its anger for the United States.

Foreign Minister Mevlut Cavusoglu, for example, said recently that “Russia understood Turkey’s position on the YPG better than the US.”

He was speaking prior to the visit to Ankara by Russia’s chief of general staff, Gen. Valery Gerasimov, for talks regarding Syria, and most notably the situation in Idlib. Cavusoglu also appeared to disregard reports that Moscow is trying to convince Ankara about the need to give the Democratic Union Party (PYD), the umbrella organization of the YPG, a say in the Syria talks.

The "realism" pro-government circles bandying about now to support their argument for the need to talk to Assad have many faces, though.

Galip Dalay, an expert with the government-sponsored Political, Economic and Social Research Foundation, which stands very close to Erdogan, says Ankara is already in contact with Damascus indirectly through Russia and Iran. Turkey is part of the “Astana Process” initiated for Syria with these two countries.

Dalay argues that any expectation that direct dialogue with Assad will provide what Ankara wants in Syria is misplaced.

“Supporters of this thesis are chasing pipe dreams. This includes the expectation that an accord with Damascus, Tehran and Moscow will produce a joint understanding and roll back the PYD’s gains in Syria,” Dalay argued in an article for daily Karar.

He added that “this does not appear very realistic” and cited Moscow’s position regarding the YPG and PKK. He also recalled that Russia had provided the YPG protection against Turkey in Afrin earlier this year.

Dalay pointed to another difficulty for those who are exhorting direct dialogue with Damascus. “A Turkey that establishes a relationship with Assad for the sake of developing joint policies cannot at the same time remain as the main country sponsoring the opposition,” he said.

He went on to indicate that Turkey will also have to evacuate territory it gained from IS in northern Syria during Operation Euphrates Shield if it wants closer ties with Assad. “This will mean Turkey will lose the only actor it has any influence over in Syria,” Dalay argued.