Pro-government Turkish analysts say Moscow’s call for dialogue between Ankara and Damascus over Afrin is an effort to sideline Turkish aims in Syria. 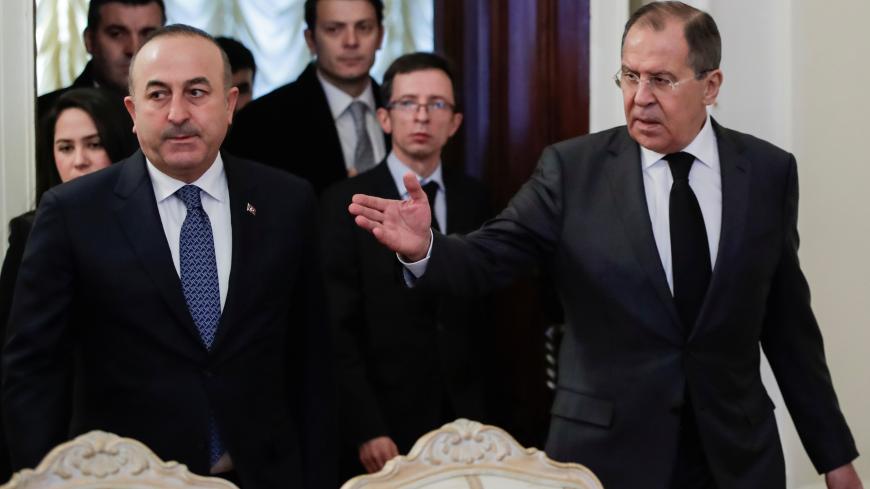 Cracks appeared again in the alliance of convenience between Turkey and Russia last week following Russian Foreign Minister Sergey Lavrov's call on Ankara and Damascus to sort out their differences over Afrin through dialogue.

The call ruffled feathers in Ankara and prompted pro-government and independent Turkish analysts to once again question the extent to which Turkey can ultimately rely on Russian support in Syria.

Lavrov’s remarks came amid reports that pro-regime militias had entered Afrin in response to a call from the People's Protection Units (YPG), the group Ankara says is a Kurdish terrorist organization. Turkey launched its ongoing Operation Olive Branch Jan. 20 to expel the YPG from Afrin.

What angered Ankara most was Lavrov’s implication that Damascus is now party to the dispute between Turkey and the YPG in Afrin, adding a complicating and possibly obstructing dimension to the Turkish government’s plans for territories under its control in northern Syria.

During a joint news conference with his Pakistani counterpart Khawaja Muhammad Asif in Moscow Feb. 20, Lavrov was asked about reports that pro-regime forces had entered Afrin.

He answered by first underlining the need to respect Syria’s territorial integrity in what appeared to be a dig at Turkey, the only country presently conducting overt military operations in Afrin. After acknowledging Turkey’s “legitimate security concerns,” Lavrov said Ankara could realize and protect its security aims through direct dialogue with the Syrian government.

The general assumption among Turkish analysts is that Moscow could have prevented the regime's move in Afrin if it had wanted to.

Nagehan Alci, a columnist for Haberturk who is known for her close links to President Recep Tayyip Erdogan and the ruling Justice and Development Party (AKP), noted that it was unthinkable that forces attached to the regime could have moved on Afrin without Russian knowledge and approval. She added, “Seeing the regime’s flag wave in Afrin would be to Russia’s advantage.”

Erdogan continues to adamantly reject the idea of dialogue with President Bashar al-Assad. Ankara, however, carefully refrains from any direct criticism of Russian proposals it does not like. Tellingly, Turkey is aiming all its barbs over the deteriorating situation in eastern Ghouta at Assad and is intentionally disregarding the Russian involvement there.

Turkey is mindful that its operation in Afrin relies on Moscow’s tacit green light, especially with regard to using Syrian airspace for airstrikes. It also has to consider the vast economic interests involved in its relations with Russia, and Ankara's growing ties with Moscow are providing a counterbalance to its deteriorating ties with Washington.

Russia is also careful in its statements regarding Turkey’s policies in Syria. Moscow did not openly criticize Turkey for its incursion into Syria against the YPG even though it complicates its plans for Syria, preferring instead to blame the United States for forcing Ankara into the move.

Retired Turkish Ambassador Ali Tuygan believes — as many do — that one of Moscow's principal aims in appeasing Ankara is to drag Turkey away from the United States and NATO toward its own orbit.

In remarks to Al-Monitor, Tuygan noted, however, that Moscow is also aware of the need to ensure that it does not lose the Kurds to the United States. “It is trying to chart a course accordingly. It does not, for example, recognize the YPG as a terrorist organization and has produced a draft constitution that also factors in the Kurds,” he said.

Responding to Lavrov with measured words, Erdogan’s spokesman Ibrahim Kalin said in Ankara that while direct dialogue between Ankara and Damascus was out of the question, there were “indirect contacts” through Russian and Iranian intercession.

“However, if extraordinary situations require it and when certain problems have to be resolved, our intelligence agencies can establish direct or indirect contacts,” Kalin added in what appeared to be a diplomatic concession to Moscow.

Many in Turkey also believe that Moscow turned a blind eye to Damascus' move in Afrin as a warning shot to Ankara following US Secretary of State Rex Tillerson’s recent visit to Turkey. It requires little imagination to guess that Moscow is closely monitoring fresh Turkish-US efforts aimed at arriving at some kind of an accommodation over northern Syria.

Hilal Kaplan, a columnist for the pro-government Sabah, believes that Tillerson’s visit to Ankara forced Russia’s hand. She argued, however, that heeding Lavrov’s call would drive the Turkish-backed Syrian opposition to seek US support. “What is calling for Turkey to throw away its influence over the opposition, if not nonsense?” Kaplan wrote.

In the meantime, Ankara is still trying to fathom what Moscow’s often repeated assertion that it “recognizes Kurdish aspirations” means in plain terms. Turkish officials are aware that Russia is trying to get all the parties in Syria to accept a draft constitution that includes representation and some degree of autonomy for the Kurds.

Having made itself the key player in this crisis, Russia is currently pushing hard for a political settlement in Syria that will have its own large stamp on it. A Russian Foreign Ministry statement last week — following the Security Council’s adoption of Resolution 2401 calling for a 30-day cease-fire in Syria — reflected this goal, underlining Moscow’s determination to “toughly oppose attempts to derail the political process in Syria.”

Turkey, however, remains equally determined in its opposition to any autonomous Kurdish region in northern Syria, whether it is set up by the United States or Russia.

Mehmet Ocaktan is a former AKP deputy who writes for Karar, which represents the more liberal wing of the AKP. He was also direct in his assessment of Lavrov’s call for dialogue between Ankara and Damascus. Saying it was an attempt to “dynamite Turkey’s aims in Syria,” Ocaktan wrote, “What Lavrov is openly saying is this: If you want to be in Syria, you have to agree with Assad. You can also forget about the US.” He added that Russia would never give up on Assad and would also continue to protect the YPG and its mother organization the Democratic Union Party, which Turkey says is also a terrorist organization.

Ankara, which officially welcomed the resolution, did not respond to the Russian ambassador’s remarks. Deputy Prime Minister Bekir Bozdag was nevertheless quick to point out that it did not apply to Turkey’s Olive Branch operation.

Hurriyet's Taha Akyol believes that Moscow’s policy in eastern Ghouta — which is supposed to be one of the de-escalation zones agreed on between Turkey, Russia and Iran in Astana — also shows the limits of its relations with Ankara. He argued in his column, “Russia will, at an as yet indeterminable stage, oppose Turkey. We should not forget that it is only acting positively today to cause fractures in NATO.”

As the Syrian crisis enters a new stage following the defeat of IS, Ankara is still not sure which world power’s help it can rely on to realize its aims in Syria. It is also unclear whether it can achieve its aims on its own.

These aims are mainly predicated on curbing Kurdish aspirations along its border with Syria. Ankara is also hoping to create a region under its protection in northern Syria, where it can house large numbers of predominantly Sunni Syrians who have taken refuge in Turkey.

The only thing that is clear yet is that Turkish and Russian plans for Syria do not overlap to the extent that both sides would like the world to believe.