Turkey’s Western allies are increasingly frustrated with its attempts to direct the US-led military coalition’s focus from the Islamic State to the Syrian regime, while Russia and Iran are openly opposing Turkey’s attempts to establish a buffer zone. 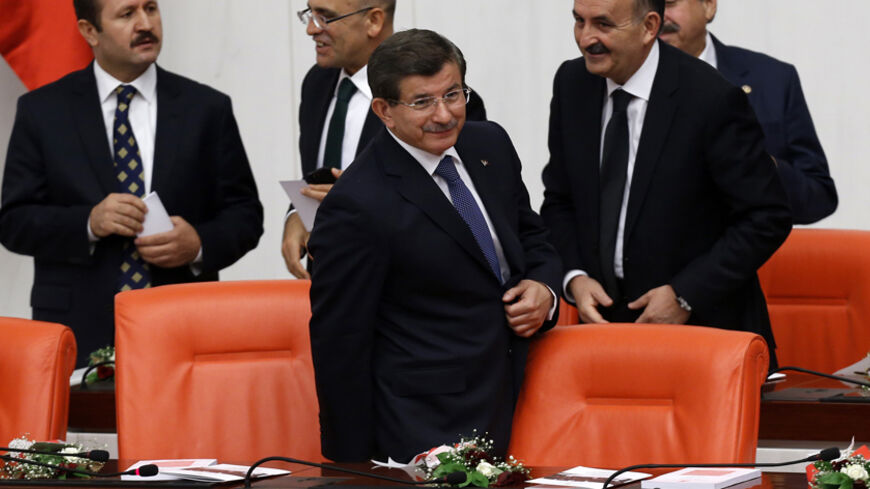 Turkey’s Syria policy is increasingly at odds with those of its Western allies, who are frustrated with Ankara’s attempt to shift the focus of the mission of the US-led military coalition from the Islamic State (IS) to the regime of President Bashar al-Assad.

Unable to get its allies to target Assad directly, Ankara is not only fighting a losing battle in this regard, but also fueling the anger of its neighbors that continue to support the Syrian regime.

Russia and Iran are now openly chastising Turkey for pushing regime change in Damascus and indicating that they will not accept the buffer zone Ankara is seeking on the Syrian side of the border. Prime Minister Ahmet Davutoglu says the zone is necessary for the protection of Syrian refugees.

Domestic criticism of President Recep Tayyip Erdogan and Davutoglu’s regional policies is also increasing, with critics charging that their failures have deepened Ankara’s international isolation while producing threats to social stability and security in Turkey.

This point is currently being hammered home by rioting by Turkish Kurds, who accuse Ankara of inaction as their kin face defeat and destruction at the hands of IS in Kobani, the northern Syrian town literally a stone’s throw from the Turkish border.

Davutoglu blames agitation by the pro-Kurdish opposition for these riots, in which nearly 35 people have died. He is also adamant that the UN Security Council is to blame for the chaos in Syria, and is determined to keep the focus on the Assad regime, rather than IS.

“Those who were silent as 300,000 people were killed during the past 3½ years, who ignored the use of chemical weapons, SCUD missiles and barrel bombs, are now trying to create the impression that Turkey must instantly solve the problem in Kobani. The blame for all these developments is on the Security Council and its five permanent members,” Davutoglu said during a press conference after an Oct. 8 security summit in Ankara.

Meanwhile, government sources continue to stress that Turkey will consider putting boots on the ground in Kobani only if others take the lead. While the government has parliamentary authorization now to intervene militarily in Iraq and Syria, there is little evidence to suggest that Turkey will participate in coalition airstrikes against IS.

Ankara continues instead to push for a buffer zone in Syria and was momentarily heartened this week when France provided support for the idea while US Secretary of State John Kerry and his British counterpart Philip Hammond paid lip service to it in a press conference in Washington. The White House, however, clarified later that such a plan is not presently under consideration.

Turkey is facing further difficulties after Russia criticized Davutoglu for stressing the need to topple the Syrian regime, and Iran warned Ankara not to stir up trouble in the region.

“It is impermissible to use the slogans of anti-terrorist struggle for attempts to replace existing regimes,” said Russian Foreign Minister Sergey Lavrov in Moscow during a press conference with his Venezuelan counterpart Rafael Ramirez on Oct. 8.

Russian Foreign Ministry spokesman Alexander Lukashevich also put a damper on Turkey’s efforts to set up a buffer zone when he declared Oct. 9 that this could only be done with UN Security Council approval.

Iran, for its part, criticized the parliamentary authorization Ankara recently received that permits it to intervene militarily in Syria. “The countries in the region should act responsibly with regard to the current situation and not contribute to the exacerbation of the situation,” Iran’s Foreign Minister Mohammad Javad Zarif reportedly told his Turkish counterpart Mevlut Cavusoglu over the phone on Oct. 2.

Meanwhile, Iran's official Islamic Republic News Agency cited Deputy Foreign Minister Hossein-Amir Abdollahian as saying Oct. 9 that Tehran has warned Turkey against any kind of military intervention in Syria. Turkey is clearly caught between a rock and a hard place. Russia and Iran are warning Turkey not to intervene in Syria, while the United States and other NATO allies are doing the opposite.

Retired US Gen. John Allen, appointed by President Barack Obama to oversee the coalition against IS, and his deputy Brett McGurk were in Ankara on Oct. 9 trying to work out the modalities of the Turkish contribution to the coalition. All the evidence suggests, however, that Turkey remains reluctant to get directly involved unless the toppling of the Syrian regime becomes the main aim.

In the meantime, Davutoglu is countering charges that Turkey is simply watching as Kobani's Kurds face a potential massacre by underlining the fact that Turkey has taken in tens of thousands of Kurdish refugees from that part of Syria, along with the 1.5 million refugees it has taken in since civil war erupted in that country.

Western diplomats in Ankara, however, are not convinced that this exonerates Turkey from contributing to the military efforts against IS. One diplomat who wished to remain anonymous due to his sensitive position told Al-Monitor, “Having declared an open-door policy for predominantly Sunni refugees from Syria, and used this to tout its humanitarian approach to the Syrian crisis, it would have been odd if Turkey left the Syrian Kurds stranded at a time when they faced destruction. International condemnation would have been widespread.”

Erdogan and Davutoglu are also eliciting strong domestic criticism over their Syria policy. According to Hurriyet’s widely read columnist Ertugrul Ozkok, they are dragging Turkey toward disaster in the Middle East. “The policy of trying to topple Assad has collapsed. Turkey must immediately stop its policy of sticking its nose into the internal affairs of regional countries. If this policy continues it could open a period of great enmity toward Turkey in the region,” Ozkok wrote Oct. 9.

Retired Ambassador Ozdem Sanberk, who heads the Ankara-based International Strategic Research Organization, also believes that the government’s Syria policy needs overhauling. “This policy is not sustainable,” Sanberk told Al-Monitor, adding that conditions in that country are not now what they were initially. “There is a whirlpool there now. It is difficult to maintain former policies as if conditions had not changed,” he said.

“Assad said at the time that his departure would not be like that of [late Libyan leader Moammar] Gadhafi. He said, ‘If I go, the whole region will become unstable.’ These words appear prophetic today.” Sanberk added. He also pointed out that Turkey is isolated today, not just in the region, but in the world, because of its policies toward crises in the Middle East.

“The risks of this are evident. There is a price to be paid for international isolation. Every country wants to promote its national interest, but doing so in isolation is difficult,” he said.

Sanberk went on to add that Turkey’s relations with Washington are also very tense at the moment and said it is hard in today’s world for a country to promote its interests while its ties with the United States are strained in this way.