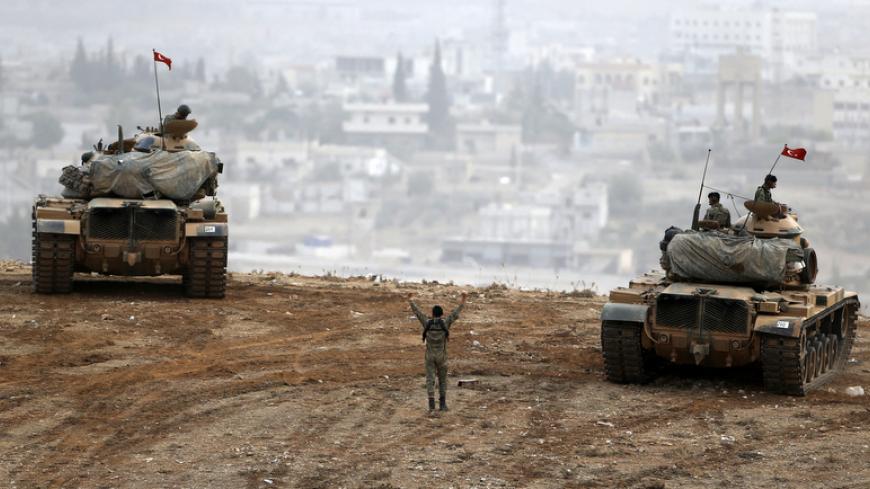 Turkish army tanks take position on top of a hill near the Mursitpinar border crossing in the southeastern Turkish town of Suruc in Sanliurfa province, Oct. 11, 2014. - REUTERS/Umit Bektas

On Oct. 10, UN Special Envoy for Syria Staffan de Mistura warned that if Islamic State (IS) forces take Ayn al-Arab (also known as Kobani), 12,000 Syrian Kurdish civilians trapped by the fighting will “most likely be massacred.”

The UN envoy appealed to Turkey to “allow the flow of volunteers at least and their own equipment to be able to enter the city and contribute to a self-defense operation. And if they can, to support the deterrent actions of the [coalition] through whatever means from their own territory.”

Despite de Mistura’s appeal, and following two days of meetings between John Allen, the US special presidential envoy for the global coalition to counter the Islamic State (IS), and Brett McGurk, deputy assistant secretary of state, with Turkish officials in Ankara, Turkish President Recep Tayyip Erdogan offered no assistance to Syrian Kurds in Kobani.

What Turkey did offer was support for the US-led effort to train and equip moderate Syrian rebels. The coalition's access to the Incirlik air base remains an issue. A day after National Security Adviser Susan Rice said that Turkey had approved US use of the Incirlik air base in Turkey for airstrikes against IS, a Turkish official denied this was the case and said talks were ongoing.

The US Department of State’s press statement following the Allen-McGurk meetings tried to mask the thin results of the consultations with diplospeak: US discussions with Turkey about the coalition were in the “early stages” (meaning they reached no agreement on US requests); "a joint military planning team will visit Ankara early next week to follow up in military-to-military channels” (maybe after Kobani has fallen); and “we will continue a dynamic and deepening bilateral consultation process across the multiple lines of effort against [IS]” (meaning more talk).

Erdogan is holding out for the United States to impose a no-fly zone as a safe haven for Syrian rebel forces and to take military action against the Syrian government.

“We should also take decisive steps against the regime in Syria. … Otherwise we cannot take a role,” Erdogan said.

Erdogan’s policies have provoked riots in Kurdish cities across Turkey, with over 30 protesters killed, and Diyarbakir, Batman, Bingol and Van are now under martial law, as Tulin Daloglu reports.

Cemil Bayik, a top commander in the Kurdistan Workers Party (PKK), previously warned Al-Monitor that the PKK might resume its war against the state if Turkey did not move against IS in Kobani.

What is incomprehensible to most observers is Erdogan’s willingness to hold hostage Turkey’s role in the US-led coalition against IS to weaken the PKK and draw the United States into military action against the Syrian government.

Amberin Zaman explains how Erdogan might consider the fall of Kobani an opportunity, despite the risks of harsh international criticism:

“Turkey would probably be happy to see Kobani fall. The town has emerged as a symbol of Kurdish resistance. It hosted [PKK leader Abdullah] Ocalan when he used to live in Syria under the patronage of the late Syrian President Hafez al-Assad. Kobani also has huge strategic significance. It lies between a swath of uninterrupted Kurdish-controlled towns and villages to the east collectively known as the canton of Jazeera and the Kurdish-administered town of Afrin to the southwest. The Kurds have long wanted to link the three by pushing out IS and other Syrian rebels from the areas separating them. The prospect of a Kurdish entity run by the PKK is more than Turkey, and especially its generals, can stomach.

“Kobani’s fall would deal a humiliating blow to the PKK and weaken its support among Syria’s Kurds. It would also force [Salih] Muslim [head of the Democratic Union Party (PYD)] and the PYD to patch up their differences with Massoud Barzani, the president of the Kurdistan Regional Government (KRG) in Iraq, who claims to be the ‘true leader’ of all the Kurds. Although Barzani has spoken in defense of Kobani, he has yet to reproach Turkey over its stance.”

“The new generation of Kurds, as Bayik warned in his interview with Al-Monitor, is so radicalized that even the PKK finds it hard to keep them in line. Should Ocalan be perceived as capitulating to Turkey, he would lose his grip over them, too.

Ozdem Sanberk, a former ambassador and current head of the International Strategic Research Organization in Ankara, told Semih Idiz that Turkey’s position was ”not sustainable.”

“There is a price to be paid for international isolation. Every country wants to promote its national interest, but doing so in isolation is difficult,” Sanberk said.

The Syrian government has faced widespread anger from even its supporters following the Oct. 1 suicide bombing in regime-held Homs that killed more than 40 children.

Edward Dark writes of the frustrations that have led residents to speak out:

“Another point of great aggravation to regime loyalists in many cities across Syria is the rampant unrestrained corruption and criminality of many of the paramilitary militias linked to the regime, like the Ligan Shaabiya and National Defense Forces, which loot houses and run checkpoints and are notorious for taking bribes to let weapons or wanted men through, or pocketing fees to allow trucks with legitimate cargo to cross.”

Dark notes, however, that despite the “fury and resentment” of Homs residents, “the rising radicalization and sectarianism of rebel factions” has convinced regime supporters that there is no other alternative.

Dark writes, “Although the suffering of regime loyalists is great and increasing — as is the case for all Syrians — there are a number of factors that help put these protests in perspective. For better or worse, the fates of the regime and its core constituency are inextricably linked, a bond unlikely to break until the last man standing.”

Conditions are also grim in Aleppo, where anti-IS airstrikes have increased hardships for local residents.

Mohammed al-Khatieb reports, “The coalition’s strikes on oil fields aim to deplete one of IS' main sources of funding. Nevertheless, civilians are the most affected by the battles raging in their country, as the increased oil prices have impacted the prices of all other commodities, including food and industrial products.”

Coalition airstrikes have also not stopped extremists from targeting Lebanon.

Recent attacks in the Bekaa Valley near the town of Brital by Jabhat al-Nusra against Hezbollah positions could be an attempt by the terrorist group to shift the balance of forces in Syria.

Ali Hashem writes, “The group [Jabhat al Nusra], which introduces itself as al-Qaeda in the Levant, might be aspiring to the ambitious goal of pushing Hezbollah back to defend Lebanese territory, in the process forcing it to leave Syria, leaving the regime in Damascus to defend itself against the existential threats along the front lines within its borders.”

Jean Aziz reports that Jabhat al-Nusra “thought that they had a golden opportunity to play on Lebanese internal conflicts, especially using Sunni-Shiite sectarian divisions to foment turmoil inside Lebanon and increase support for them.”

[EDITOR'S NOTE: This article has been updated since publication to reflect Turkey's stance on coalition use of its Incirlik air base.]

by Murielle KASPRZAK and Joseph SCHMID | AFP | May 26, 2022
END_OF_DOCUMENT_TOKEN_TO_BE_REPLACED