The fall of Kobani would deal a severe blow to Kurdish independence hopes and bolster Turkey's political goals. 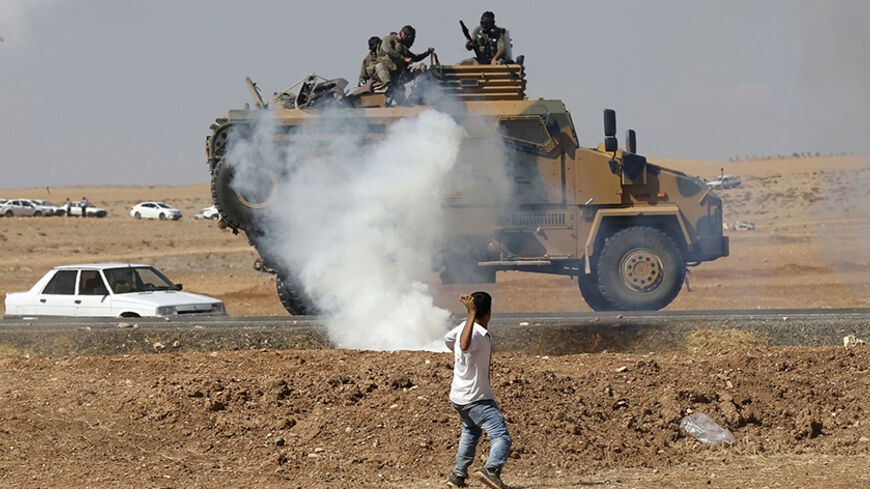 A protester throws stones at a Turkish armored vehicle during a pro-Kurdish demonstration in solidarity with the people of Kobani, near the Mursitpinar border crossing on the Turkish-Syrian border, Oct. 7, 2014. - REUTERS/Umit Bektas

As Islamic State (IS) fighters keep up their battle to gain control over Kobani, a strategic Syrian Kurdish-controlled enclave on Turkey’s border, the effects of the conflict are being felt in Turkey itself. Thousands of Kurds took to the streets across the country on Oct. 7 to protest Turkey’s inaction against IS' seemingly unstoppable advance. The government slapped curfews on six provinces in the mainly Kurdish southeast region after clashes between protestors and the security forces, and between rival Kurdish groups, left at least 14 people dead. Elsewhere across the country, police clashed with demonstrators, trying to push them back with pressurized water and pepper spray while the Kurds responded with Molotov cocktails in a foretaste of the violence that is likely to engulf the country should Kobani fall.

None of this comes as a surprise. Many Kurds continue to believe that Turkey is complicit in the jihadists’ onslaught against Kobani. Cemil Bayik, one of the top commanders of the Kurdistan Workers Party (PKK), repeated this claim in a Sept. 25 interview with Al-Monitor. Abdullah Ocalan, the imprisoned PKK leader, is threatening to call off peace talks with the Ankara government should there be a massacre in the enclave. Turkey denies it is siding with IS.

But it is doing little to aid the Kurds. This in turn invites the question of whether Turkey sees the Kurds as a greater threat than the jihadists, who stand to grab their third border crossing with Turkey. Turkish President Recep Tayyip Erdogan appeared to suggest that IS and the PKK were equally dangerous. “It is wrong to view them differently, we need to deal to them jointly,” he told reporters Oct. 3 in Istanbul. Erdogan’s comments hold the key to understanding Turkey’s policy on Kobani.

Turkey’s inaction over Kobani is undermining the peace process. Erdogan’s hopes of winning Kurdish support for constitutional amendments that would boost his presidential powers hang on friendship with the Kurds. A breakdown of the PKK’s 18-month-long cease-fire would likely jeopardize his ruling Justice and Development Party’s (AKP) chances in nationwide parliamentary elections scheduled for June. None of this appears to faze the Ankara government. This is because Erdogan and his AKP disciples view Kobani as an opportunity rather than a threat.

The opportunity ought to be to win the hearts and minds of Turkey’s Kurds by riding to the rescue of their brethren in Syria. Instead, Erdogan has chosen to exploit Kobani’s imminent fall to wrest maximum concessions from assorted Kurdish leaders. This was amply on display during last week’s secret meeting in Ankara between Salih Muslim, the co-chair of the Democratic Union Party (PYD), and senior Turkish officials from the Foreign Ministry and the national intelligence agency, MIT. Muslim reportedly beseeched the officials to allow the passage of arms and, most crucially, anti-tank weapons through the Mursitpinar border crossing with Kobani to enable Syrian Kurdish People's Protection Units (YPG) fighters to fend off IS. Turkey said it would do so only if the PYD severed all its ties with the Syrian regime, joined the rebels, dissolved the PYD-dominated local governments running the enclaves, shared power with rival Syrian Kurdish parties and distanced itself from the PKK.

Muslim seems to have offered conflicting versions of what transpired, telling Al Jazeera that “agreement was reached in a number of areas" and the BBC that Turkey “did not keep its promises.” He has not responded to Al-Monitor’s repeated requests for comment. Either way, it’s hard to imagine that he yielded to Turkey’s demands or that he even has the authority to do so, because Ocalan and the PKK leadership in the Kandil Mountains call the final shots.

Turkey to its credit has offered sanctuary to more than 100,000 refugees from Kobani, and it is letting wounded YPG fighters in for treatment in hospitals. But Turkey would probably be happy to see Kobani fall. The town has emerged as a symbol of Kurdish resistance. It hosted Ocalan when he used to live in Syria under the patronage of the late Syrian President Hafez al-Assad. Kobani also has huge strategic significance. It lies between a swath of uninterrupted Kurdish-controlled towns and villages to the east collectively known as the canton of Jazeera and the Kurdish-administered town of Afrin to the southwest. The Kurds have long wanted to link the three by pushing out IS and other Syrian rebels from the areas separating them. The prospect of a Kurdish entity run by the PKK is more than Turkey, and especially its generals, can stomach.

Kobani’s fall would deal a humiliating blow to the PKK and weaken its support among Syria’s Kurds. It would also force Muslim and the PYD to patch up their differences with Massoud Barzani, the president of the Kurdistan Regional Government (KRG) in Iraq, who claims to be the “true leader” of all the Kurds. Although Barzani has spoken in defense of Kobani, he has yet to reproach Turkey over its stance.

Meanwhile, the PKK’s threats to resume its war sound like bluster to Turkish ears. Aaron Stein, a security analyst, told Al-Monitor, “The Turkish government is banking on the fact that the PKK can ill afford to open a second front against Turkey when it is battling IS in Iraq and in Syria.” Not only that, Ocalan would be loath to condemn himself to political irrelevance and spend the rest of his days rotting in prison. No matter how bitter, Kobani is a pill the Kurds will be forced to swallow. Ocalan will be forced to continue the peace talks, the pro-Kurdish People’s Democracy party (HDP) will play along and the PKK will hold its fire. This, anyway, seems to be Ankara’s thinking.

But it is fraught with risk.

The new generation of Kurds, as Bayik warned in his interview with Al-Monitor, is so radicalized that even the PKK finds it hard to keep them in line. Should Ocalan be perceived as capitulating to Turkey, he would lose his grip over them, too.

It was the fear of a PKK-dominated Kurdish statelet in Syria that propelled Turkey to resume peace talks with Ocalan in 2012 in the hope that he would keep the Syrian Kurds’ aspirations in check. The plan doesn’t seem to have worked. “The peace process began because of Syria’s Kurds,” recalls Arzu Yilmaz, a scholar of Kurdish affairs at Ankara University. “And it is because of them that it will unravel,” she concludes.