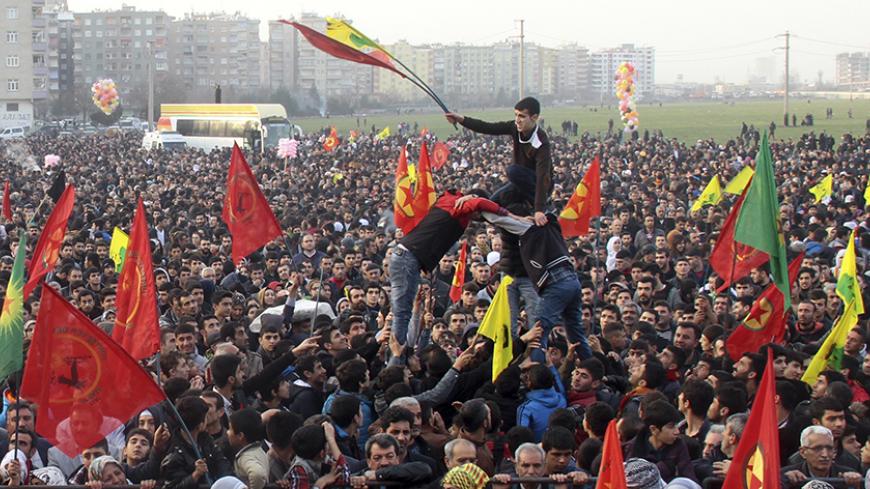 People gather to celebrate in the Kurdish-dominated city of Diyarbakir in southeastern Turkey after Kurdish forces said they took control of the Syrian town of Kobani, Jan. 27, 2015. - REUTERS/Sertac Kayar

“Kobani is free. Ocalan is next,” thousands of Kurds chanted across Turkey, Iran, Iraq and Syria when they celebrated the liberation of Kobani on the Syrian-Turkish border after 133 days of bloody war against Islamic State (IS) fighters.The hard-earned victory there is seen as a watershed in the Kurds’ decadeslong struggle for ethnic rights. But some analysts say the most immediate winners are the Kurdistan Workers Party (PKK) and its imprisoned leader Abdullah Ocalan, and the losers are not just IS but Turkey as well.

The PKK and its Syrian affiliate, the People's Protection Units (YPG), have spearheaded the battle against the jihadists in Iraq and Syria, outshining the Iraqi Kurdish peshmerga fighters who fled when IS overran Shengal last summer. An increasing number of Iranian Kurds are rallying to the Syrian Kurds’ defense, spelling further politicization among Iran’s restive Kurds. But in the short term, the support serves Iran’s purpose of weakening IS and Turkey while exporting its Kurdish problem beyond its own borders — a tactic also used by late Syrian President Hafez al-Assad, who allowed Ocalan to live and organize in Syria. With a network spanning Europe, North America and the Middle East, the PKK is arguably the most influential Kurdish movement in the world.

Its gains extend beyond the battlefield to the diplomatic arena. For the first time, the United States is overtly cooperating with the PKK, despite its continued inclusion on the State Department’s list of terrorist organizations. Unremitting US-led coalition airstrikes against IS targets in and around Kobani tipped the battle decisively in the Kurds’ favor.

Asiyah Abdullah, co-chairwoman of the YPG’s political wing, the Democratic Union Party (PYD), confirmed that the Kurds had defeated IS in Kobani. She told Al-Monitor in a telephone interview, “The US airstrikes were extremely helpful.” Abdullah emphasized, however, that the campaign against the jihadists was continuing. “Our forces are now concentrating on winning back surrounding villages,” she said. The US Central Command said Kurdish forces control 90% of Kobani. “While the fight against [IS] is far from over, [IS'] failure in Kobani has denied them one of their strategic objectives,” Central Command said in a statement.

The defining moment for changing relations between the United States and the PKK came when US C-130 cargo planes dropped aid and weapons to beleaguered Kurdish forces on Oct. 19 just as the enclave was poised to fall. The move left Turkey, a key NATO ally that has been fighting the PKK on and off since 1984, in shock, and deepened long-running suspicions about US intentions in the region.

Turkish President Recep Tayyip Erdogan made little effort to mask his displeasure over the turn of events. Speaking to reporters on Jan. 26, Erdogan suggested that he had asked US President Barack Obama not to intervene on the side of the Kurds. “I told Mr. Obama, ‘Don’t drop those bombs [meaning weapons and other supplies]. You will be making a mistake.’ Unfortunately, despite our conversation, they dropped whatever was needed with three C-130’s and half of it landed in [IS'] hands. So who is supplying [IS], then?”

The displeasure is mutual. Washington has voiced frustration over Ankara’s refusal to let coalition planes use the Incirlik airbase in southern Turkey for combat missions against IS. (Some policymakers in Washington argue the United States ought to build a military base in Iraqi Kurdistan to replace Incirlik.) Turkey’s rejection of Kurdish demands to let their fighters open a supply line to Kobani from the Turkish side proved to be the final straw: US airdrops ensued and Ankara was forced to open the corridor, but only for 150 or so Iraqi Kurdish peshmerga, who have been backing YPG forces with long-range artillery they deployed in Kobani.

Had Turkey backed the Kurds to begin with, “The view that Turkey is siding with IS would not be so widespread,” said a Western diplomat who asked not to be identified because of the sensitivity of the subject.

The PKK and the PYD both claim that Turkey has been arming and training jihadists in a proxy war aimed at undermining the Syrian Kurds’ experiment with self-rule, and that its policy is having a boomerang effect. The Jan. 6 suicide bomb attack carried out by a female IS militant that claimed the life of a Turkish police officer in Istanbul’s Sultanahmet district was a sobering reminder that Turkey is not immune from the jihadists, either.

Turkey has repeatedly denied that it is colluding with Islamic extremists against Syria’s Kurds and points out that it is caring for more than 200,000 refugees from Kobani. More than a thousand wounded YPG fighters have also been treated in Turkish state hospitals, Turkish officials add. But there is little doubt that the Turkish government would have preferred a protracted stalemate to a victory by either side.

Erdogan has made it clear that he is opposed to any arrangements in Syria that would mirror the Iraqi Kurds’ de facto state in northern Syria. He repeated this view in his Jan. 26 comments to journalists, asking, “What is this? Northern Iraq? Now [they want] Northern Syria to be born. It is impossible for us to accept this. … Such entities will cause great problems in the future.”

Erdogan’s comments smack of Ankara’s shrill ultimatums when the Iraqi Kurds formed their own regional government in the 1990s. At the time, Turkey egged on the Iraqi Kurds against the PKK and the Iraqi Turkmen against the Iraqi Kurds. Relations between Ankara and Washington sharply deteriorated after US occupation forces foiled an alleged Turkish plot to assassinate Kirkuk’s Kurdish governor. Today, the Iraqi Kurds are Turkey’s closest regional allies and top trading partners, though their friendship has been tested by Turkish reluctance to take on IS. Might a similar scenario be replayed in Syria?

“Turkey could not stop the Kurds in Iraq; they are unlikely to do so in Syria,” said the Western diplomat. “Turkish policy has united the Kurds if not their leaders.” But Turkey can continue to make life difficult for them all the same. The Syrian Kurds are growing increasingly dependent on the flow of aid from Turkey. And unlike its mountainous borders with northeastern Iraq, where the PKK is based, Turkey’s borders with the Kurdish-populated regions in northern Syria are totally flat, making them an easier target for potential military intervention.

Yet for all of Erdogan’s chest thumping, this seems the least likely option. Setting aside a likely international outcry, the domestic repercussions would be huge. Erdogan’s Islamist Justice and Development Party (AKP) government has been conducting peace talks with Ocalan for the past two years, and a cease-fire declared in March 2013 has been holding, by and large. Neither side can afford to resume the war. The PKK is tied down by IS and the AKP is betting on a fourth straight victory in parliamentary elections due to be held on June 7.

“With Kobani, the fates of Turkish and Syrian Kurds have become irreversibly intertwined,” Arzu Yilmaz, a researcher on Kurdish affairs at Ankara University, told Al-Monitor. “And the more Turkish Kurdish fighters die for their common cause, the stronger the bond. Turkey’s Kurds see any attack against their Syrian brethren as an attack against themselves,” she said.

Still, Erdogan’s remarks suggest that Turkey will keep political and economic pressure on the Syrian Kurds and continue to badger them to join the Istanbul-based Syrian opposition and to declare war against the regime. This, in turn, risks further undermining support for the peace process among Turkey’s Kurds, potentially triggering a fresh cycle of violence and instability.

The recent spate of deadly street battles pitting pro-PKK Kurds against their pro-Islamist rivals in the town of Cizre on the Iraqi border is widely seen as an ominous spillover from Kobani. Such pan-Kurdish sentiments pose a dilemma for Ocalan, who insists that Turkey’s Kurds do not want a separate state. Abdullah, the PYD co-chairwoman, insists that the Syrian Kurds have no plans for independence, either. “We are fighting for democracy for all the Syrian people no matter their faith or ethnicity,” she said. “We want good, neighborly relations with Turkey and we invite Turkey to help rebuild our infrastructure and to help us heal the wounds of this war.” Abdullah deftly deflected any questions about alleged Turkish collusion, saying, “IS is not just a threat to the Kurds; they are a threat to everyone.”