Rumors of electoral collusion between the government and the Kurdish Peoples' Democracy Party (HDP) gain momentum. 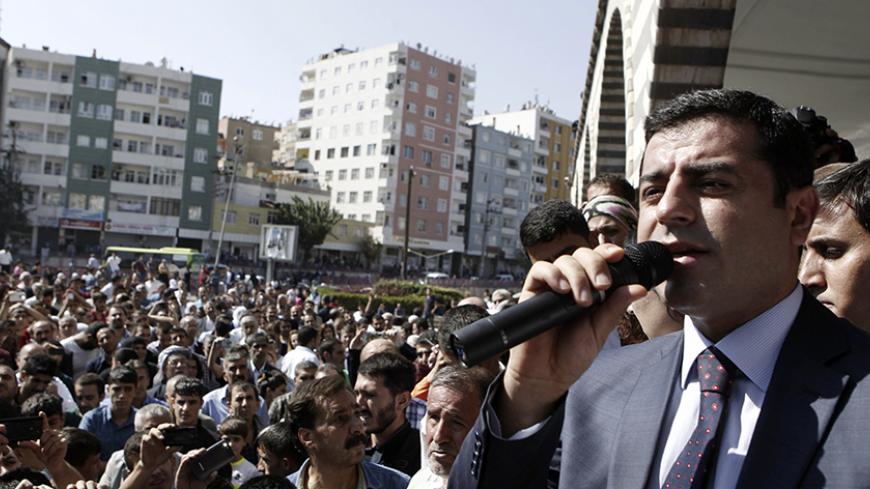 As Turkey’s controversial president, Recep Tayyip Erdogan, mulls plans to boost his executive powers the country’s Kurds have emerged as key players in a high-stakes gamble that could either bolster the country’s shaky democracy or suck it into chaos.

The drama is centered on parliamentary elections to be held June 7. Few doubt that Erdogan’s Islamist Justice and Development Party (AKP), which has held power since 2002, is headed for a fourth straight electoral victory. But it is unlikely to muster the 376 seats needed to unilaterally rewrite the constitution in ways that would enable the president to tighten his grip. Should Erdogan cling to his ambitions, the AKP will need to turn to another party for its support. And this is where the Kurds enter the picture.

The Peoples' Democracy Party (HDP), the largest Kurdish-dominated political bloc, has announced plans to contest the polls as a party rather than field independents as it has in the past. The Kurds had resorted to this tactic to circumvent the minimum 10% of the national vote that a party needs to win seats in the 550-member legislature.

The 10% rule was introduced by the army when it last seized power in a direct coup in 1980. It was designed to shut the Kurds out of mainstream politics and blunt ethnic nationalism. It has had the opposite effect.

A succession of parties with close links to the outlawed Kurdistan Workers Party (PKK), the rebel group that has fought on and off for Kurdish self-rule since 1984 — and of which the HDP is the latest incarnation — control hundreds of municipalities, big and small, in the predominantly Kurdish southeast. The Kurds are hoping to draw votes from a broader constituency of liberals, women, environmentalists and first-time voters from across the country.

On Jan. 7, Selahattin Demirtas, the youthful HDP co-chairman, addressed thousands of supporters at a packed convention in Istanbul. The crowds were electrified as the darkly handsome former human rights lawyer conceded that “yes, it’s a risk to run as a party.” He paused for effect, then raised a clenched fist. “But we will make it into the parliament as a party this time,” he roared. Ululating Kurdish matrons let rip.

But can the HDP garner 10%? An HDP official who requested anonymity had her doubts. “It's too much of a gamble; what if we do not make it, then what?” she asked. The question is gaining urgency and not just among the Kurds. If the HDP fails to breach the barrier, then under Turkey’s electoral rules the first runner-up in districts the HDP won would mop up all of its seats. This is almost certain to be the AKP, whose conservative message appeals to millions of pious Kurds. This, in turn, means that the AKP would clinch its coveted two-thirds majority and hand Erdogan executive powers.

Critics claim that vested with such unfettered power, Erdogan’s transition from a grand reformer to a dictator will be complete. “Turkey will go from being a one-party state to a one-man state,” said Howard Eissenstat, a historian at St. Lawrence University in Canton, N.Y. Even some AKP members feel queasy about the changes. It may be just with such potential defectors in mind that the president is insisting on personallty drawing up candidate’s lists for the June polls. His handpicked prime minister, Ahmet Davutoglu, seems to hold little, if any, sway.

Although Demirtas picked up nearly 10% of the popular vote in the presidential elections held in August, analysts warn that his party will be hard-pressed to duplicate his success. “The dynamics of a presidential race are quite different to parliamentary elections,” Arzu Yilmaz, an Ankara-based academic observed in an interview with Al-Monitor. “In the former, one votes for a personality; in the other for a party.” Early opinion polls suggest that the HDP is hovering around the 8.5% mark.

Irfan Aktan, another Ankara-based Kurdish analyst, argues that either way, the HDP will come out on top. In a telephone interview with Al-Monitor, Aktan said: “If they get into the parliament, this will strengthen their hand in the peace process; if not, the HDP will establish its own parliament and cement self-rule in the Kurdish regions. It’s a win-win.” Aktan was referring to secret negotiations that have been continuing for the past two years between the government and the imprisoned PKK leader Abdullah Ocalan.

These have yet to yield any substantive results. Demirtas confirmed that the government has refused to back legislation to lower the 10 percent threshold. In a further setback, the Constitutional Court recently upheld the rule which rights groups say hinders fair representation. PKK commanders in the field are also threatening to end a shaky cease-fire that has been holding since March 2013 if the Kurds’ demands for greater political and cultural autonomy are not met.

Others speculate that Ocalan and Erdogan have already struck a deal: The Kurds will forfeit their seats in the parliament in exchange for a string of yet-to-be announced concessions. A seasoned Kurdish politician with inside knowledge of the peace talks claimed that just such an agreement has been cemented. “The HDP is running as a party knowing full well it won’t get into the parliament,” he insisted in an interview with Al-Monitor. Demirtas has brushed off the accusations as “ugly lies.” Ocalan has final say over whether the HDP will run as a party or not and sources close to the negotiations argue that the PKK leader could pull back at the last minute and order his men to run as independents.

Yet allegations of HDP-government collusion have been circulating for some time. These resurfaced when HDP members pulled out of a parliamentary commission tasked with investigating graft charges being leveled against four former AKP cabinet ministers. The HDP said it withdrew in protest of a gag order placed on commission members. “We did not want to be bit players in a parliamentary theater to whitewash the AKP,” Pervin Buldan, an HDP member of parliament, told Al-Monitor.

The AKP-dominated commission voted against sending its own men to trial.

But Sezgin Tanrikulu, a lawmaker from the pro-secular Republican’s Peoples' Party (CHP), retorted that the HDP could have joined fellow opposition members in registering a dissenting opinion. “They could have espoused a firm stand against corruption. They chose not to,” he told Al-Monitor.

Some analysts believe that the Kurds may be overplaying their hand.

The deadly street battles that have flared up in recent months between pro-PKK and Islamist youths in the township of Cizre suggest that the PKK’s grip over a new and radicalized generation of Kurds may be slipping. On Jan. 14, a 12-year-old boy, identified as Nihan Kazanhan, was shot dead by unidentified assailants as a crowd dispersed in the wake of an HDP rally, again in Cizre.

Other questions loom: Should Erdogan get the constitutional changes he is seeking, might he stop humoring the Kurds? What if the cease-fire were then to collapse? “Both sides will lose,” predicts Yilmaz, the academic. And in the short term, it is the PKK that might feel most of the heat.

The PKK and its Syrian counterpart, the People’s Defense Units (YPG), are bogged down in a vicious turf war in Iraq and Syria against Islamic State (IS) militants. Thanks to sustained aerial bombardment from US-led coalition forces, the Kurds have succeeded in wresting back some 85% of Kobani. The battle-weary town on the Syrian-Turkish border has emerged as a symbol of Kurdish resistance. Faced with an international outcry, Turkey was shamed into opening a supply line for several hundred Iraqi peshmerga forces who rushed to the embattled enclave’s rescue as it was about to fall in October.

YPG sources told Al-Monitor that Turkey was reneging on pledges to replenish their ammunition stocks and has spurned an offer from the Kurdish authorities in northern Iraq to bring in their own weapons to Kobani. A Western source speaking on condition of strict anonymity explained Turkey’s position to Al-Monitor thus: “Erdogan prefers a protracted stalemate to a victory for either side.”

Eissenstat points to Turkish plans to purchase 1.9 million tear gas canisters and gas grenades as a further ominous sign of planned government measures to quell dissent. “Erdogan has a grand vision for Turkey and will not let anything stand in his way,” Eissenstat says, adding that should the Kurds ease his path, “They will only have themselves to blame.”

Editor's note: This piece has been updated since its initial publication