As Turkey continues to roil in the aftermath of the referendum, the ruling party is now claiming the Kurds helped President Recep Tayyip Erdogan win in what Kurdish leaders call "blatant disinformation." 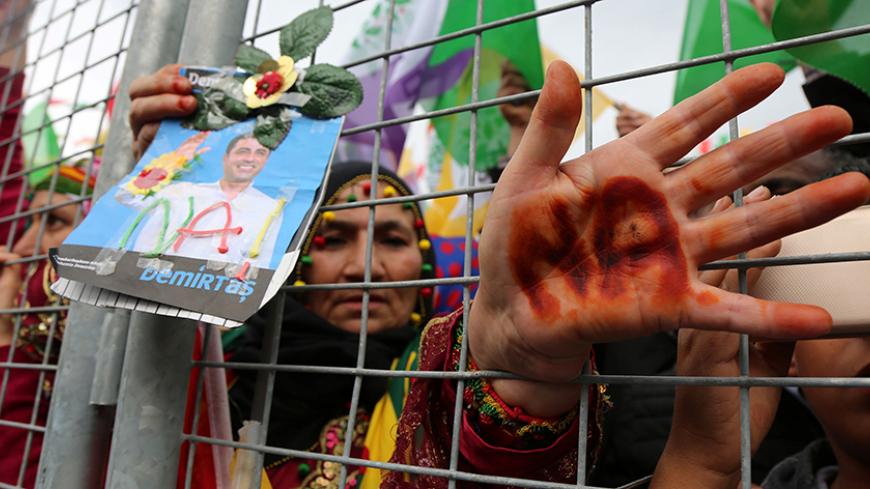 A supporter holds a portrait of Selahattin Demirtas, the detained leader of Turkey's pro-Kurdish opposition Peoples' Democratic Party, and shows her hand on which is written the Kurdish word for "no" during a rally for the upcoming referendum in the southeastern city of Diyarbakir, Turkey, April 15, 2017. - REUTERS/Sertac Kayar

In the heated debate over Turkey’s fraud-stained referendum, one particular narrative stands out: that the country’s 16 million or so Kurds played a considerable part in swinging the outcome, albeit narrowly, toward a yes. This, in turn, has prompted hopeful murmurs of a thaw in the frozen peace talks between the government and the Kurds. But Kurdish leaders dispute this version, saying it overlooks the fact that much of the alleged cheating took part in the mainly Kurdish provinces. Veteran Turkish commentator Rusen Cakir called renewed Kurdish support for government an “urban legend.”

The claim first came from President Recep Tayyip Erdogan shortly after the results were announced. Erdogan said, “When we consider the status of the political parties in the referendum, we observe a 10-20% increase in the southeastern provinces.”

He was comparing the percentage of yes votes in the heavily Kurdish region with the share received by his ruling Justice and Development (AKP) during the last parliamentary elections held in June and November 2015. A chart circulated by pro-AKP accounts via social media conflating the yes votes in the referendum with those won by the AKP stated that support among the Kurds for the ruling party had jumped by over 400,000 votes.

Presidential spokesman Ibrahim Kalin echoed the claims of a Kurdish boost in his column for the pro-government Daily Sabah. “By making a very clear distinction between the Kurds and the PKK, President Erdogan and the government have won the Kurdish confidence again.”

Kalin was referring to the Kurdistan Workers Party (PKK), the rebel group that has been fighting for Kurdish independence and autonomy since 1984. A shaky 2½-year cease-fire broke down in July 2015 after Erdogan disavowed a road map for peace that was agreed on between the government and the imprisoned PKK leader Abdullah Ocalan. The PKK was sharply criticized by locals when it carried its battle to the cities, prompting a brutal government response. Entire towns and neighborhoods were pulverized, hundreds of civilians were killed and nearly half a million Kurds were forced to flee their homes with no tangible gains for the cause.

At the same time, the government embarked on a relentless campaign against the country’s largest pro-Kurdish bloc, the Peoples’ Democratic Party (HDP) and its sister party, the Democratic Regions Party (DBP). At least 10,000 Kurdish lawmakers, officials and supporters remain behind bars over thinly supported terror links. They include the HDP's co-chairs, Selahattin Demirtas and Figen Yuksekdag, and 12 fellow HDP parliamentarians, one of whom was arrested after the referendum. DBP’s Co-chair Sebahat Tuncel is also in jail together with 85 mayors elected on the party's ticket in the southeast, where 83 DBP-run municipalities have been taken over by government administrators.

The DBP’s other co-leader, Kamran Yuksek, was slapped with a 30-year jail sentence over his alleged ties with the PKK. Yuksek was in Europe when the sentence was handed down and has no immediate plans to return.

In a telephone interview with Al-Monitor, Yuksek called the government’s efforts to paint the referendum results as proof of growing Kurdish approval for its heavy-handed policies “a blatant disinformation campaign.” Yuksek noted that most of the mainly Kurdish provinces had voted overwhelmingly against the measures, which concentrate power in Erdogan’s hands. “Erdogan is trying to deflect attention from the fact that he lost in all the big cities. It’s a sign of desperation,” Yuksek contended. “Besides, a referendum is a straight choice between a yes and a no. Parliamentary elections offer multiple choices. It's not a meaningful parallel.”

HDP lawmaker Mithat Sancar noted in an interview for the online news portal Medyascope TV that comparisons between the referendum and the parliamentary elections were a cynical exercise in legitimizing the referendum. “These figures should not be debated as if everything were normal in the region,” Sancar complained. He added that if anything, the millions of Kurds living in Istanbul, Izmir, Mersin and Adana, where the no votes prevailed, had most likely helped tip the balance against Erdogan.

Polling outfit IPSOS appeared to corroborate Sancar's claims in a survey conducted after the vote that showed that 99% of HDP voters in Istanbul had rejected the constitutional changes.

Many of the irregularities reported by international observers occurred in the southeast, where the playing field was even less level than in the rest of the country.

With so many of their members in prison, the HDP and the DPB had to rely on inexperienced volunteers to run their campaigns. Many said they faced government intimidation and were not allowed to monitor the voting. In Diyarbakir, three HDP observers were detained during the vote and have yet to be freed.

In the village of Kockaya in Batman province, for example, all but 15 registered voters voted in favor of the amendments. In the November 2015 parliamentary elections, 60% of Kockaya had voted for the HDP. Since the July coup attempt, all of Turkey has remained under emergency rule but conditions in the Kurdish region are particularly harsh with continuing curfews and a heavy security presence. Yuksek believes that the bump in yes votes is partly due to the increased number in security personnel who cast their ballots in situ.

Arzu Yilmaz, a prominent scholar of Kurdish affairs at the American University of Kurdistan in Dahuk, called the referendum results illegitimate. She believes nonetheless that there may have been some support from tribal Kurds, particularly in the provinces of Hakkari and Sirnak. They border Iraqi Kurdistan, where the Kurdistan Regional Government is led by Massoud Barzani, a firm ally of Erdogan. “There is definitely a KRG influence in the yes votes,” Yilmaz told Al-Monitor.

Many analysts agree that Erdogan is unlikely to return to the peace talks and certainly not with Ocalan and the HDP. More likely he will court pro-Barzani and conservative Kurds while continuing to demonize the HDP. His goal is to push the HDP under the 10% national threshold needed to win seats in the next parliamentary election, which is due to be held in November 2019.

Yilmaz agrees. “Erdogan will look to polarize the Kurds for his own political gain,” she said.

Should the far-right Nationalist Action Party, which is bitterly divided over its leaders’ support for Erdogan, also fail to get into the next parliament, it would give the AKP an absolute majority and by extension Erdogan the unchallenged power they have long craved. Or so their calculations go.