The Kurdish Democratic Regions Party, which controls most of the local administrations in the southeast of Turkey, is under intense pressure not only over the self-rule movement in its provinces but as a staunchly democratic counterpoint to the authoritarian trend in Turkish politics. 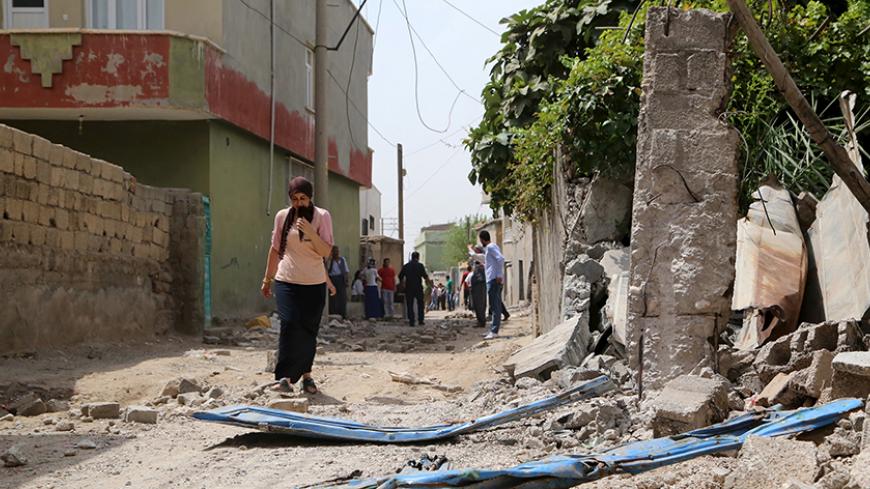 A woman walks along a street in the southeastern Turkish town of Silopi in Sirnak province, near the Turkish-Iraqi border crossing of Habur, Aug. 7, 2015. - REUTERS/Sertac Kayar

DIYARBAKIR, Turkey — The Sirnak Popular Assembly meeting that included the Democratic Regions Party (DBP) in Silopi, Sirnak province, declared self-rule on Aug. 10, 2015, under the slogan, “From now on we as the people will build our lives on a democratic basis.” Silopi's was followed by similar declarations from Cizre, Sirnak, Hakkari, Mus, Batman, Van and Diyarbakir.

State prosecutors leapt into action when President Recep Tayyip Erdogan reacted to the self-rule declaration with, “They will pay the price.” Judicial investigations and police action against the declaration were immediate. In Sirnak, 10 locations including the residences of the DBP chairman and other party officials were raided. One member of the municipal council and two DBP officials were detained. In Yuksekova, in simultaneous raids at 15 locations, eight people were detained on charges of attempting to undermine the constitutional order. In similar operations, the DBP co-mayors of Sur and Silvan and many party members were rounded up.

Military operations targeting trenches and barricades in towns followed. In parallel, judicial processes were initiated against the DBP. Those who declared self-rule were detained and many were arrested. Charges were brought against rank-and-file party members, members of municipal councils and 21 mayors.

In time, the operations extended to the upper levels of the DBP, including its co-chair Kamuran Yuksek, who had become well-known after accompanying the co-chair of the Peoples' Democratic Party (HDP), Selahattin Demirtas, to Moscow and visited the United States and Britain. Yuksek had been in prosecutors' crosshairs ever since. Summoned several times to give depositions, Yuksek was detained on May 10. Although his press statements were cited as the cause, he was detained on charges of membership in an armed terror organization.

There has been much speculation about why the DBP — whose 21 mayors and about 50 regular members were detained with another 100 summoned to court — and its co-chair were targeted by the state.

According to a DBP Executive Council member, Yuksek’s adviser Ramazan Tunc, there are three reasons. He listed them to Al-Monitor: “The first reason is that our party, which participated in the 2014 local elections, won 106 mayoralties in heavily Kurdish provinces with the slogan ‘to ensure identity through self-government.’ The DBP is a party that aims at decentralization and handing over local administrations to locally elected people because we are a party that advocates decentralization, a party that promotes collective decision-making against one-man administrations and wants to empower local authorities. Because we have the strength to do all this, the totalitarian structure is attacking us. The second reason is the changes and transformation because of changes in the Middle East. During the Syrian civil war, Rojava [Syrian] Kurds opted for a cantonal system and a North Syria Federation that were received favorably by the international public. This prompted Turkey to support even [Islamic State] gangs to prevent the Kurds from making any gains. This generated deep resentment among the Kurds and led to the Kobani disturbances on Oct. 6-8 when people took to the streets. This was followed by state attacks against 13 towns. The third and last reason is the fourth extraordinary DBP congress with the theme of restructuring the party. The government sent our leader Kamuran Yuksek to prison to prevent such restructuring.”

Mehmet Kaya, chairman of the board of Dicle University's Social Research Center in Diyarbakir, said the targeting of Yuksek is a result of security policies. Kaya told Al-Monitor that alongside Yuksek, the entire gamut of Kurdish politics are in the state’s crosshairs. “Because of clashes in the region, the DBP is becoming a major target. There are two primary political arenas in Turkey: the national assembly and local administrations. The HDP provides Kurdish representation in the national parliament, while the DBP is the backbone of local politics. Although the initial declaration of self-overnment was made by the Democratic Society Congress, the DBP has been more active in declarations of democratic autonomy,” he said.

Kaya added that the presidential aspirations of the ruling Justice and Developmet Party (AKP) are also beind Yuksek's targeting. “I don’t believe the operations are only about Yuksek’s statements. All Kurdish political actors expressed similar views. But you have to understand that in Kurdish politics, Selahattin Demirtas and Kamuran Yuksek are major names with followers. They are two key actors who defend democratic autonomy fervently. For the AKP to realize its presidential aspirations it needs to get most of the nationalist votes. To that end, they have to manipulate the sentiments of those voters. That's why they don’t go after rank-and-file members but the leaders of the HDP and the DBP. This is what the AKP is trying to do by detaining Yuksek.”

On his recent visit to Diyarbakir, new Prime Minister Binali Yildirim accused the metropolitan municipality run by the DBP of transferring funds to the PKK and said they will be asked for an account. The pressure on the DBP will continue.