Hit by an unprecedented crackdown, representatives of Turkey’s Kurdish political movement explain their vision for the future. 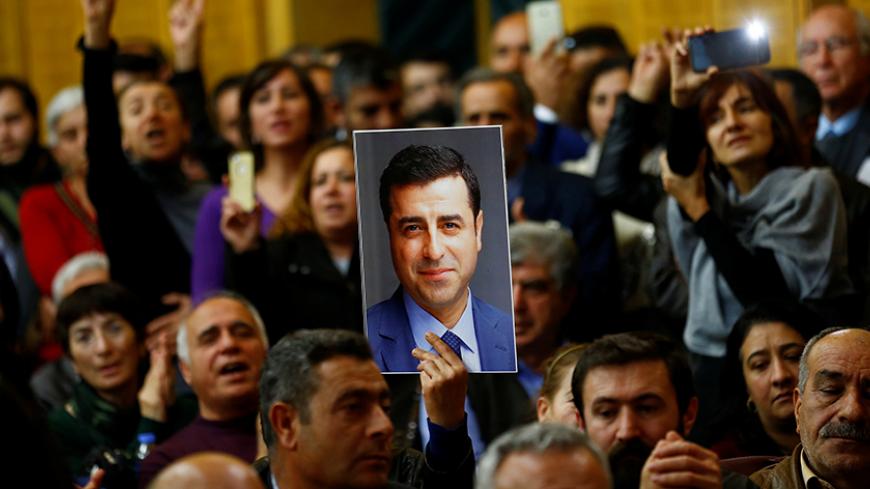 A supporter holds a portrait of Selahattin Demirtas, detained leader of Turkey's pro-Kurdish opposition Peoples' Democratic Party, at a meeting at the Turkish parliament in Ankara, Nov. 8, 2016. - REUTERS/Umit Bektas

The Peoples’ Democratic Party (HDP), representing the Kurdish movement in national politics, is the third largest force in Turkey’s four-party parliament. Unlike its predecessors, the party, established in October 2012, adopted a national agenda, deciding to address concerns beyond the Kurds and the Kurdish question. As such, the HDP became the most successful party in the history of the Kurdish movement. In the 2014 presidential elections, party co-chair Selahattin Demirtas garnered 9.7% of the vote, well above the traditional 5%-6% share for Kurdish parties. In the July 2015 general elections, the HDP won 13% of the vote, making it the first Kurdish party to surpass the 10% national threshold to enter parliament. In the snap polls in November that same year, it mustered 10.7% to clinch its current 59 seats in the 550-member parliament.

Meanwhile, local politics in Turkey's predominantly Kurdish southeast have been dominated by the HDP’s sister organization, the Democratic Regions Party (DBP), the Peace and Democracy Party's successor that won 102 local administrations, including 11 provincial capitals, in municipal elections held in March 2014. In a democratic climate, no matter how flawed, the Kurdish base and its representatives were able to exert influence. The HDP played an active role in the 2013-14 settlement process, engaging and even cooperating with the government. Once authoritarian tendencies began to rise in government and violence superseded politics, however, the same Kurdish base and representatives became a huge problem in Ankara's eyes. For nearly two years now, the Turkish state and government have been venting anger at and trying to criminalize the HDP and the DBP.

This new chapter began in July 2015 as the de facto cease-fire between the Turkish state and the Kurdistan Workers Party (PKK) collapsed. The state launched an onslaught against the PKK, while the PKK exposed its goal of entrenching itself in northern Syria, or Rojava as the Kurds call it, and embarked on an urban war in southeastern Turkey in a bid to install the canton model the Kurds have established in northern Syria. Heeding PKK calls, popular councils with DBP members declared self-rule in a number of settlements. As armed militants held out behind trenches and barricades in residential neighborhoods, urban areas became war zones, with devastating consequences for civilians, human rights, democracy and economic life.

During this time, Ankara had begun to consider the possibility of Kurdish statehood in Syria, seeing it as an imminent and tangible danger. The PKK’s war for dominance in the southeast, its influence in Syria and Kurdish advances in the Middle East in general melded into what Ankara perceived to be a serious, externally backed threat to its borders. The alarm was such that Ankara, desperate for allies against the Kurds, dropped its objection to Syrian President Bashar al-Assad's remaining in power in a bid to enlist support from Russia and Iran.

This threat perception also infected domestic politics, spawning a veiled anti-HDP alliance of the ruling Justice and Development Party and the two other opposition parties in parliament. Thereafter, parliament passed a constitutional amendment in May 2016 opening the door for prosecuting HDP lawmakers, primarily on terrorism-related charges. In a matter of months, the party’s co-chairs and 10 other deputies were behind bars.

The campaign to delegitimize the Kurdish political movement has targeted all its components, drawing on emergency powers since the failed putsch last summer. After close to 9,000 detentions, some 2,800 HDP members remain behind bars awaiting trial. Seventy-four DBP mayors have been imprisoned, while public servants have been appointed as trustees to run 61 of the party’s local administrations. No doubt, this is a staggering toll. Yet, the HDP and the BDP retain their representative strength and thus remain vital for any democratic order and any future effort to peacefully solve the Kurdish problem. This makes a few questions all the more important: What course will the two parties now take? What is their objective, and how do they view the future?

HDP lawmaker Mithat Sancar told Al-Monitor, “The party’s branches are largely paralyzed due to the arrests. We are mostly trying to sustain a basic agenda, which is the preservation of the idea of democratic politics and a negotiated settlement. The fact that the HDP still exists means that the idea of democratic politics is still alive. We are organizing popular meetings and trying to explain this to the people, especially to the young. We are trying to sustain the bonds between politics and society.”

Nazmi Gur, a member of the HDP’s Foreign Relations Committee, also stressed the party’s commitment to democratic politics. He told Al-Monitor, “Demirtas has kept sending two messages from prison: Uphold the sphere of legal politics and insist on democratic means, [in other words] stay in parliament, no matter how many deputies are left.”

What about the party’s broader vision for the future? Idris Baluken, an HDP lawmaker with ideological clout, believes Turkey’s course is no longer immune to developments in Syria and Iraq. “We are passing through a phase in which the borders in the Middle East, drawn a century ago, and the nation-state model have begun to erode,” Baluken told Al-Monitor. “Countries such as Iran and Turkey are resisting this transformation process, [but] developments in Iraq and Rojava will outpace this status quo approach, and a new era will come about, based on the peoples of the region and the notion of democratic nations. That’s how the HDP views politics and the future.”

According to Baluken, the Kurdish quest for self-rule in northern Syria has already swayed developments in Turkey. He said, “For the status quo approach, the 13% vote we got in the June 2015 elections was a big danger in this context. That’s the main reason behind the onslaught against us.”

The perspective Baluken outlines highlights a paradox for the HDP and DBP in light of their efforts to sustain democratic politics and the influence of the PKK. The intersection between politics and violence, or relations between the HDP-DBP and the PKK, raises a question: Who is the real leader of the Kurdish movement, and who will really steer its course in the future?

The HDP and DBP sometimes follow and implement PKK strategies, but sometimes the two political parties take independent stances. During the urban clashes, for instance, the DBP advanced self-rule declarations. The HDP sought to characterize the PKK-initiated urban war as the “people’s reaction” while also silently trying to stop the clashes at the expense of defying the PKK. Sancar said, “Barring a small clique, the HDP did not approve of the urban wars.” Gur acknowledged “political shortcomings” in preventing the escalation.

Regardless, the HDP is now paying the price. The party’s paradoxical stance has contributed to this outcome, also leading to negative reactions from the general public and Kurds who lost loved ones, homes and livelihoods in the clashes.

Yet, despite occasional deviations, the HDP’s political compass points toward the path of democracy. The party faces an uphill trek with a double-edged sword dangling above it. The road ahead may be tough, but it still represents a glimmer of hope for Turkey, the Kurds and democratic politics.