Turkey's top Kurdish politician to run for president from behind bars 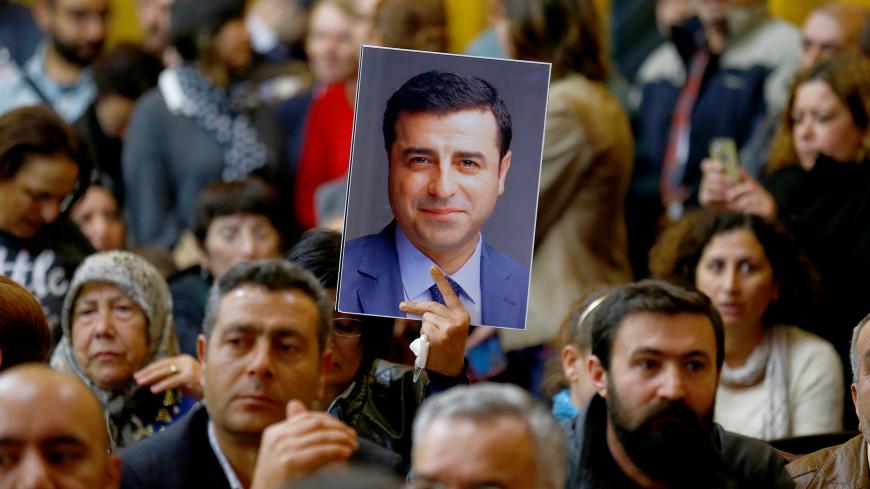 The Peoples' Democratic Party (HDP) is gearing up to nominate its imprisoned former co-chair, Selahattin Demirtas, as its presidential candidate in the June 24 snap polls. In an executive board meeting today, the country'y largest pro-Kurdish bloc agreed on fielding Demirtas and is expected to make a formal announcement in the coming days, CNN Turk reported.

Though Demirtas faces a slew of terror charges over his alleged links to the outlawed Kurdistan Workers Party (PKK), there currently are no legal obstacles to his candidacy.

Accounting for some 18% of the electorate, the Kurds could tip the race. At his most recent courtroom hearing a defiant Demirtas echoed this view. “We are the ones who will determine the [outcome] of the presidential elections. We are the lock. We are the key.”

An estimated 8-10% of Kurdish voters are thought to be core HDP supporters with a remaining 6-7 % mostly pious conservatives voting for the Justice and Development Party (AKP). The rest are divided among the more radical Islamist Huda-Par and far-left groups. The military offensive against a Syrian Kurdish militia in Afrin and President Recep Tayyip Erdogan's electoral alliance with ultranationalists, however, have alienated its Kurdish base.

Still, Demirtas is unlikely to win enough backing to face the leading contender Erdogan in a potential second round of balloting. But his halo effect could torpedo Erdogan’s calls to bury the HDP in parliamentary elections that will be held concurrently with the presidential ones.

Erdogan is bent on denying the HDP the minimum 10% of the national vote required to win seats in the parliament. Erdogan’s AKP remains the second-most popular party in the mainly Kurdish southeast provinces, and thus would, according to prevailing laws, pick up the HDP’s share of seats as the first runner-up, bolstering the AKP’s chances of retaining its majority in the parliament.

The HDP and its sister party the Democratic Regions Party (DBP) have been emasculated by an unremitting barrage of arrests and intimidation tactics since the failed July 2016 coup. Over 80 DBP mayors have been stripped of their seats and jailed along with eight HDP lawmakers (not counting Demirtas) and thousands of party activists. With their best and brightest behind bars, the parties have been left rudderless, their grassroots networks in disarray.

The decision to nominate Demirtas speaks to his enduring star power. At his hearing, Demirtas electrified the audience with his passionate yet incisive defense. “They can ban me from politics but even my corpse would be more politically effective than some other [politicians] who are alive.” He wasn’t being immodest. In a landscape populated with sclerotic has-been and never-been hopefuls, Demirtas stands out as the most influential Kurdish figure to emerge since the imprisoned PKK leader Abdullah Ocalan ignited his armed campaign for Kurdish self-rule in 1984. The 45-year-old shot to national prominence when he ran for president in 2014 in an irreverent campaign tinged with mirth, hope and wit. Demirtas’ message of peace and inclusiveness resonated with millions of non-Kurdish voters, bagging him an unexpected 9.7%. In the June 2015 legislative race, Demirtas carried the HDP into the parliament for the first time with 13%. The AKP lost its majority for the first time in the chamber as a result and the famously vindictive Erdogan is said to have not forgiven him.

Demirtas is the only imprisoned HDP lawmaker to not have been sentenced so far. That could change when he reappears in court on April 30.