Turkey's ruling party has the country's largest pro-Kurdish bloc in a chokehold as the clock winds down toward the elections. 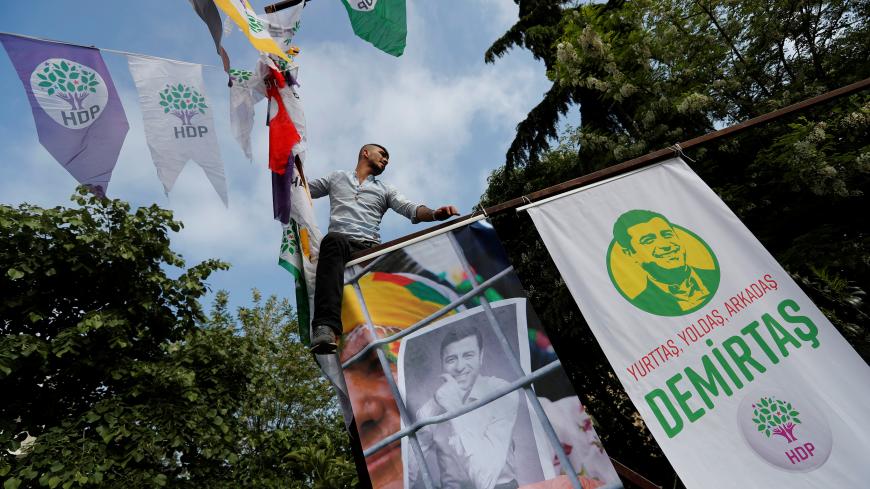 A supporter of the pro-Kurdish Peoples' Democratic Party hangs posters of Selahattin Demirtas, the party's jailed former co-leader and the candidate for the upcoming presidential election, during a gathering, Istanbul, Turkey, May 4, 2018. - REUTERS/Murad Sezer

Pressure against Turkey's largest pro-Kurdish bloc is nothing new. But with under three weeks left before the June 24 presidential and parliamentary polls, the Peoples’ Democratic Party (HDP) is being squeezed more tightly than ever. HDP officials charge that the ruling Justice and Development Party (AKP) is trying to prevent the HDP from winning the minimum 10% of the vote needed to take seats in the parliament so as to ensure its continued dominance of the legislative body. Under Turkey’s convoluted rules, the first runner-up in a given electoral district picks up a party’s seat if it fails to scale the national barrier and in the Kurdish-dominated southeast, that would likely be the AKP. An estimated 80 seats are at stake.

The HDP chronicled the chokehold in a report. Between the start of the election campaign on April 28 and June 3, at least 136 HDP officials were detained and 14 of them arrested. The party’s campaign bureaus and stands were attacked. In the southern city of Hatay, unknown assailants shattered the windows of an HDP liaison office and tore down the party’s banners on May 28 just hours after the local governor’s office gathered representatives from parties competing in the race to offer tips on security. The HDP was not invited. In Ankara, HDP offices and street stands were attacked and neighborhood canvassing events interrupted 10 times.

Meral Danis Bestas, an HDP lawmaker representing the southern province of Adana, conceded that while it is impossible to prove the government was orchestrating the attacks, security forces continue to engage in “brazen intimidation tactics.” Bestas told Al-Monitor they include deploying armored police vehicles within close proximity of HDP rallies, unremitting ID checks that “amount to harassment” and unleashing scores of policemen into the crowds who “menacingly” snap photos of attendees. Bestas reiterated charges that provincial governors and other ranking bureaucrats with local army commanders in tow were touring villages and hamlets in the southeast, where they ordered citizen to vote for the AKP “or else.”

Turkish President Recep Tayyip Erdogan kept up his salvos against the HDP in the Kurds’ informal capital Diyarbakir yesterday. Addressing what several seasoned journalists in the city confirmed to Al-Monitor was a fairly modest crowd, Erdogan blamed the HDP’s presidential candidate Selahattin Demirtas, who is running his campaign from prison, for deadly protests that erupted in the city in October 2014 over Turkey’s perceived lack of support for Kurdish militants against the Islamic State in the Syrian town of Kobani. “Who told … my Kurdish brothers to take to the streets. … Then what happened? Fifty-three of our brothers were killed, were martyred. [Their] blood has stained this Demirtas’ hands,” he said.

Demirtas is among thousands of HDP politicians and activists who remain behind bars on thinly evidenced terror charges. Bestas noted that in the township of Pervari in the southeastern province of Siirt, the HDP’s entire provincial leadership has been sitting in prison for the past year and a half. Demirtas insists he is being unlawfully held and argues that if there were no legal obstacles to his candidacy, it follows he should be freed pending trial in the plethora of cases he’s been slapped with. Among the most serious are those leveled by Erdogan regarding the Kobani demonstrations. Demirtas denies any wrongdoing.

Recent opinion polls suggest the HDP will hold its ground in the elections. Turkey’s invasion of Syrian Kurdish Afrin encouraged by Erdogan’s nationalist allies will have bolstered the party’s appeal. Some of Demirtas’ own popularity continues to draw non-Kurdish liberals as well. A staggering 1.5 million youths will be eligible to vote for the first time. With unemployment rising after 16 years of AKP rule, they offer rich opportunities for the opposition, including the HDP.

Meanwhile, a growing number of people who would typically vote for the secularists now talk about holding their noses and voting for the HDP in the parliamentary contest to deny the AKP a majority. But Bestas is wary, saying, “There is no room for complacency. The government is mobilizing all its force to keep us down. We are on a razor’s edge.”