One year into crackdown, Turkey’s pro-Kurdish opposition battered but defiant

Nine members of the Peoples’ Democratic Party remain in prison a full year after the detentions on terrorism-related charges began, and joint leader Selahattin Demirtas’ first day in court is scheduled for Dec. 7. 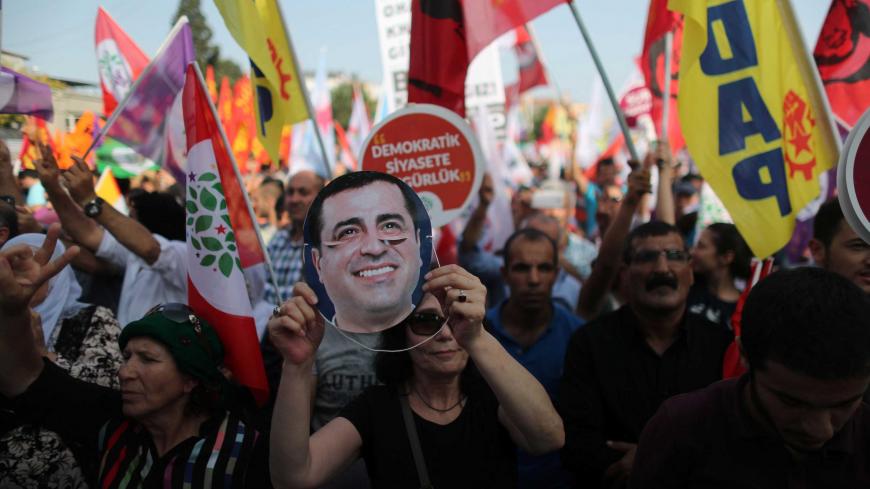 Turkey’s opposition Peoples’ Democratic Party (HDP) is weakened yet resolute a year after the detention of a dozen of its lawmakers and a wider crackdown crippled the Kurdish political cause and damaged the European Union candidate's democratic credentials.

Joint leaders Selahattin Demirtas and Figen Yuksekdag, along with 11 other parliamentarians from the pro-Kurdish bloc, were arrested in dawn raids on Nov. 4, 2016. The party leaders and seven other HDP lawmakers remain behind bars, and some of their trials on charges ranging from membership in the armed Kurdistan Workers Party (PKK) to inciting deadly protests have yet to begin.

The party, the parliament’s third-biggest, has seen five of its 59 lawmakers, including Yuksekdag, stripped of their seats in the legislature. The state has seized control of 94 of 102 municipalities from its sister party in the mainly Kurdish southeast. Thousands of party activists are in prison, pro-Kurdish media has been all but silenced and dozens of civil society groups shuttered.

The measures followed an eruption of violence between the PKK and state security forces in 2015 following the collapse of peace talks with the militants. Swaths of cities in the southeast were leveled and nearly 3,000 people were killed, according to the International Crisis Group.

A state of emergency in place since a failed coup in 2016 has allowed authorities to bypass parliament, extend pre-trial detention periods and sack more than 110,000 state employees.

“Despite the unlawful methods we have faced, the HDP maintains its defense of democratic principles and that the only way to end violence is to strengthen liberal politics. We derive our strength from our rightfulness,” lawmaker Meral Danis Bestas told Al-Monitor.

“At this stage, we do not expect the judicial process to be fair, but we will continue to fight to expose and challenge the inequities,” said Bestas, who was sentenced to 25 months in prison last week for comments she made about police violence.

Bestas is free pending an appeal, but has already spent more than two months in prison this year on separate charges that she belongs to the PKK, considered a terrorist organization by Turkey, the United States and the EU.

The HDP may nominate a jailed parliamentarian for the position of deputy parliamentary speaker in a vote next week to draw attention to their plight.

The arrests have taken a toll on a party that was once central in the negotiations to end the PKK’s insurgency that has claimed more than 40,000 mainly Kurdish lives since 1984. A public opinion poll released last week showed the HDP with just 7% support, below the 10% barrier to enter parliament.

In June 2015, the charismatic Demirtas, a 44-year-old human rights lawyer, helped expand support beyond the traditional base of Kurdish nationalists to clinch an unprecedented 13% of votes, depriving President Recep Tayyip Erdogan’s Justice and Development Party (AKP) of single-party rule for the first time since 2002. The HDP’s platform of progressive policies including respect for the environment and gay rights and campaign against constitutional amendments to expand Erdogan’s powers resonated broadly.

Weeks later, the peace process was shattered, and the AKP and many other Turks roundly blamed the HDP for failing to halt the violence. Another election held amid spiraling violence in November 2015 saw Demirtas’ party eke past the vote threshold. Six months later, parliament voted to lift lawmakers’ immunity from prosecution, paving the way for the HDP arrests.

Erdogan has called Demirtas a “terrorist,” holding him responsible for the deaths of Kurdish protesters and accusing him of lauding the PKK. The HDP denies direct links with the autonomy-seeking PKK.

In April, the president narrowly won the referendum giving him greater executive powers — helped in part by the sidelining of his fiercest critic, critics said. Demirtas spends his days in a prison near the Greek and Bulgarian borders painting and writing ahead of his first hearing on Dec. 7.

Bestas said the long delay in the start of the trial was part of an effort to keep Demirtas out of the limelight.

In July, the European Parliament cited an unfair referendum campaign and the arrests of the HDP lawmakers among reasons to suspend EU accession talks with Turkey.

“By killing off the party, by imprisoning its political leaders, representatives and mayors and arresting its activists, you have disabled its ability to function,” Kati Piri, Turkey rapporteur who prepared the European Parliament draft resolution, told Al-Monitor in an interview.

“This is a huge mistake, because it has forced many who voted for the HDP to feel that peaceful, democratic policies are not the way forward in Turkey and that they should support more extreme approaches that are not fit for a democracy. The government, with its crackdown, is creating bigger support for more radical approaches,” she said.

For its part, the HDP says it remains committed to peaceful politics.

“It may appear that injustice has won, but this will not last. Turkey’s future truly lies in democracy, rights and freedoms,” said Bestas.