Trial of Turkey’s opposition leader starts without him in court

A court ruled that Selahattin Demirtas, the leader of Turkey’s second-biggest opposition party, could not attend his first hearing in person, increasing concerns his trial may not be fair. 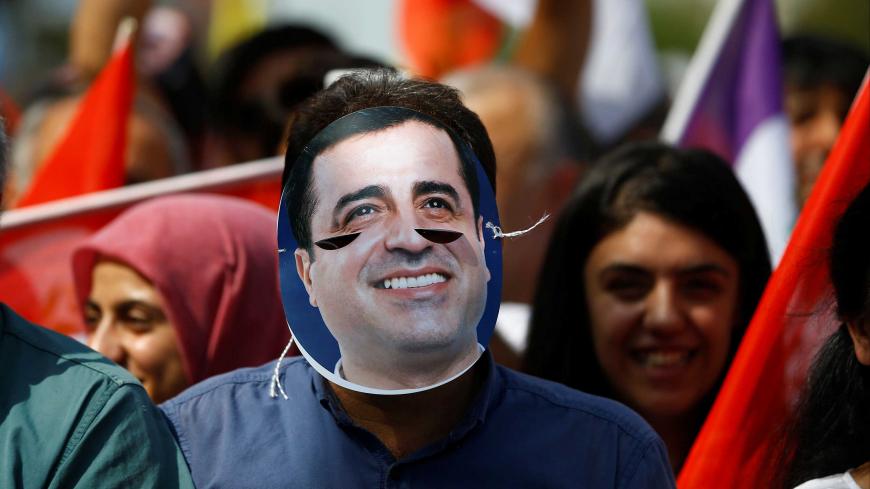 A supporter is seen wearing a mask of Selahattin Demirtas, detained leader of the pro-Kurdish Peoples' Democratic Party, during a rally in Istanbul, Turkey, Sept. 10, 2017. - REUTERS/Osman Orsal

Turkish opposition leader Selahattin Demirtas has spent more than a year in prison in pre-trial detention on terrorism charges, but on his first day in court, he was nowhere to be seen.

Judges ruled that Demirtas, the head of parliament’s third-biggest party, could not participate in person in a trial closely watched by rights group and Western governments, but instead would join by video link. Demirtas said the measure violated his rights and refused to participate in Thursday’s hearing.

It was a dramatic start to a trial that thrusts into the spotlight Turkey’s rights record during a state of emergency imposed in the wake of a military coup attempt in July 2016.

Demirtas, a former human rights lawyer, faces 142 years in prison for alleged links to the armed Kurdistan Workers Party (PKK), which has waged a three-decade war for autonomy in Turkey’s mainly Kurdish southeast that has killed some 40,000 people. He denies the charges, and his party says evidence in an “omnibus” indictment relies on what he has said in his capacity as a politician, including criticism of President Recep Tayyip Erdogan.

The court in the town of Sincan outside of the capital city of Ankara also barred international observers from the courtroom and agreed to a prosecutor’s request to keep Demirtas behind bars before the next session on Feb. 14, 2018.

For his wife, Basak Demirtas — who travels each week to the northeastern corner of Turkey to visit Demirtas in prison — the hearing fueled doubts he will be treated fairly.

“Despite 13 months passing since he was detained, he has yet to see a judge’s face,” she said of her husband in a written interview with Al-Monitor. “Now they say they cannot bring him to court to try him for security reasons. Unfortunately, the chances for an effective, just, judicial process are not apparent.”

Demirtas and his former co-chairwoman, Figen Yuksekdag, are among the nine lawmakers from the pro-Kurdish Peoples' Democratic Party (HDP) in jail. None of them are implicated in the military’s attempt to overthrow Erdogan, but of abetting the PKK when it revived its insurgency in 2015. More than 1,700 people were killed in a year of clashes, according to the International Crisis Group.

A broader clampdown following the failed putsch has imprisoned more than 50,000 people, including journalists, activists and academics. The HDP and other Kurdish groups have been particularly hard hit — almost all of their 102 mayors have been removed from their posts, and pro-Kurdish newspapers, television stations and associations have been banned.

“When we look at this as a whole, it is not a political operation that only targets my husband. It is necessary to see that it takes aim at the HDP as an institution,” said Basak. “My husband’s freedom is directly tied to this struggle.”

“The European Parliament has repeatedly called to put an end to the ongoing state of emergency, which has eroded the fragile state of the rule of law in Turkey, and for due process to be upheld,” said Laura Batalla Adam, secretary-general of the European Parliament’s Turkey Forum. “Justice should be applied fairly and impartially in the trials of all those accused.”

In remarks to Al-Monitor, Adam described “an excessively long pre-trial detention” for HDP deputies who “are not allowed to appear before the court in person, [which] constitutes a violation of the right of defense.”

Authorities say public safety requires the measures, including a ban on demonstrations ahead of the trial of a defendant Erdogan has described as a “terrorist,” holding Demirtas responsible for the deaths of Kurdish protesters.

It has been a stunning fall for Demirtas, who was once a partner in Erdogan’s bid to negotiate an end to the PKK’s insurrection. A charismatic politician who appeared on talk shows strumming a saz, Demirtas, 44, galvanized voters from across Turkey in June 2015 to win 13% of the vote and deprive the ruling Justice and Development Party (AKP) of enough seats to run the government outright for the first time since it took power in 2002.

Within weeks of the election, the peace process shattered and the AKP forced new elections and returned to single-party rule five months later. Parliament later stripped deputies of their immunity from prosecution, setting the stage for Demirtas and the others’ arrests.

The move tapped into the fear voters felt after the failure of the peace process and the HDP’s unwillingness — or inability — to halt the violence, said Levent Gultekin, a writer and former conservative, blaming the party for not putting more distance between itself and the PKK when fighting broke out.

“What the government has done to the HDP is an atrocity. But the HDP didn’t fall. It jumped into the trap that was set, and it cannot emerge from the space in which it is squeezed,” he told Al-Monitor.

Now speculation is mounting about whether Erdogan will move the general election set for 2019 up to 2018, and the HDP could be crippled without its leaders on the campaign trail. A survey last month showed it scoring less than 10% of the vote required to enter parliament.

Erdogan attended a party congress in the mainly Kurdish town of Agri last week, which some saw as an effort to woo back Kurdish support. The AKP in the past has attracted about half of Kurds’ votes.

“Demirtas is Turkey’s most effective opposition leader, and jailing him was entirely aimed at silencing him,” said Ayse Acar Basaran, a lawmaker and member of the HDP’s executive committee. She added, “This [and] the daily political sanctions we face prevent us from being an effective opposition, and this has been difficult for our party."

“But this is not sustainable. If Kurds do not stand with you, even if you are in power, it won’t last. [Erdogan] knows this; he knows he needs Kurdish backing,” she told Al-Monitor.

Meanwhile, Basak said her husband remains hopeful even as he faces another 20 separate court proceedings. The two exchange letters each week and speak by phone for 10 minutes every other week. She brings their daughters, aged 11 and 13, to see their father in prison once a month.

“My husband has worked hard for peace,” Basak said. “I realize that he will spend the rest of his life fighting for it, and I respect that. I will support his struggle until the very end.”